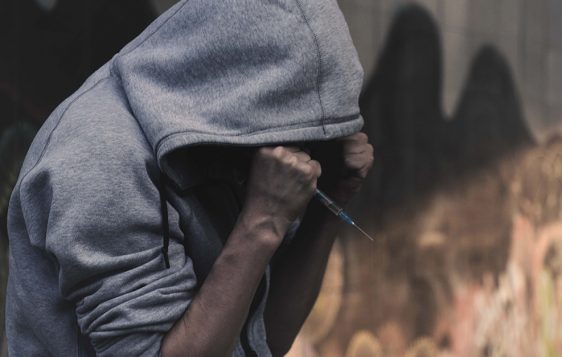 “Life isn’t worth living without it.”

Those six words spoken by my dad brought my world racing into high-definition focus in a very real and painful way.

Addiction is without question one of the most powerful forces in this world today.

Most of us have been scarred by it in some way, either by personally feeling its grip or struggling with a loved one as he or she faces its relentless hold. Some of us can even identify with both of those realities.

It was both that slammed me into silence when Dad spoke those words to me. I have a very clear memory of the pain on his face as he stood just off our front porch that day. Nothing before had stopped me cold like that did.

But I remember plenty of things that probably should have.

One of my first memories was seeing Dad passed out from mixing too many drugs with alcohol and mom and his buddies trying to wake him up. I was too young to understand it then.

Staring into a blood-soaked toilet with him showing me, “This is why you never smoke” and pointing to what had just come out of his lungs only made me think to myself, “Yeah, but I can stop whenever I want to.”

Being in the back seat on the way home from a family vacation when he got pulled over for drunk driving didn’t really faze me either. Honestly, it was just part of life growing up. I don’t know if I really have many memories of Dad without his ever-present sports thermos with its big accordion straw and filled with half whiskey, half water.

The first time I really started coming to grips with the addiction in our family was at the hospital.

I was sixteen and it was the last day of school. I got called to the office and told that I needed to go to the hospital because Dad had had a heart attack.  At the hospital, tests revealed the need for a stent. Doctors told us what to expect and then the unexpected happened.

They came and told Mom and me that when they put the stent in, the artery had ripped and caused Dad to go into a major heart attack. They said they were prepping him for emergency open-heart surgery and that we needed to say our good-byes just in case he didn’t make it.

Watching the doctors and nurses prepare to try and save Dad’s life on one side of the blue paper sheet while we said “I love you” on the other side definitely got my attention. After we walked out of the operating room and back to the waiting room, Mom literally lost it.

I stood there watching her curled up in the fetal position rocking back and forth laying on a table in the little private area were phones lined the wall. I thought for sure at that moment I had lost both of them and had no clue what I was going to do next.

Fast forward about a month later and we were all home on a somewhat normal summer day. Dad had recovered, and we were working together on a project in the front yard with the sports thermos close by. That’s when I saw him nonchalantly pull out a pack of cigarettes and light up.

He was addicted to a lot of things but in my mind that was the one that was killing him.  I yelled at him.  “How can you do that?  You’re taking years off of your life that you could spend with us!  Don’t you love us?” That’s when he looked at me with such pain in his heart and admitted for the first time:

“Life isn’t worth living without it.”

Somehow up until that point I had convinced myself that Dad and even Mom both had control and weren’t really addicted. In spite of all their problems, I was sure that they could walk away from it whenever they had enough.

At that moment I realized how wrong I was.

The other thing I realized was how wrong I was about myself too. Deep down I felt the same way about things I had gotten myself into in the past five years, telling myself over and over that I wasn’t like Dad, I wasn’t addicted, I could stop before I let it go that far. But when he said those six words, I realized I was trapped and didn’t know how to get free.

At that moment I started to understand what addiction really is.

Several months before Dad’s heart attack, God had begun dealing with my heart in ways I didn’t understand. Because I was sixteen I guess people were expecting me to plan out the rest of my life, so they asked about my future plans. Every time I thought about it, though, I saw myself in front of a church preaching!  I tried my best to get it out of my mind, but I couldn’t.

God was showing me my future, but I didn’t want anything to do with God.

Both of my grandfathers were pastors and I grew up right next door from one or the other of them most of my childhood. I knew about God and even knew the good news about Jesus.  I had this false idea that God was this big dictator with way too many rules who just wanted to keep me from having fun.

A Christian friend had tried to tell me about God one time. I’ll never forget the shock on his face when I said I knew all about that stuff and I knew what I was doing was wrong and that I was going to go to hell when I died, but I was going to do what I wanted while I could.

I hurt inside now when I think about that.

For a year, I tried to get it out of my mind until I came face to face with something that truly was worth living for.

In a very unlikely chain of events that proved to be anything but random, I found myself sitting in the gym of a church hearing about how much God loves me. I knew right then and there that doing it my way was not working and if he really loved me that much, I wanted to live for him.

I talked to God and told him all about my life and that I didn’t understand why he wanted to love me, but I was thankful he did and I wanted to live the rest of my life for him and not me.

Over the next few months as one by one my parents and I gave our lives to Christ, that love changed my entire family like nothing ever had before or ever will. God helped us each overcome our addictions in different ways.

Dad says to this day he was freed from all of it immediately and never has struggled with it again.

Mom was able to be weaned off over a period of time with help.

I experienced a little bit of both.

Some addictions I felt freedom from immediately and never have had the desire for them again; others were long battles.

Fresh from the fight, I headed off to Bible college after high school to try and figure out what was next. As I was sitting in a church service during that first year, a lady ask the church to help invite kids to a special program they were having.

God spoke to me at that moment and asked, “When are you planning to tell the world about God’s unconditional love?  You’ve been a believer for two years. You’ve spent a year in Bible college. Why haven’t you done anything yet?”

As I drove home that day, I told God I had no clue what I was doing or where I was going, but if he would lead me I would do it.

He led me to a park I had never been to before where I saw some kids heading home. I invited them to church, and a few months later we were driving a school bus picking up around thirty kids a week to take to church.

It was my first time to be obedient to God’s call, and he led me to kids who were familiar with what addiction looked like.

Two years later a church in downtown Indianapolis asked me to be their assistant pastor and move into the parsonage next to it. It was in such a bad neighborhood that the pastor himself didn’t feel safe moving his family into it: The street north of the church was famous for drugs and the one west of the church was known for prostitution.

Again God led me to familiar territory: Addiction was as common as fleas. When I talked to people, I understood first hand how they felt.

I also knew first hand how much God loved them. It was amazing to see how God was opening their eyes to that same love too. From there I’ve been blessed to be involved in God’s work of sharing His love with people literally around the world.

I currently minister here in the Dominican Republic, and it’s the same as everywhere else I’ve been: An overwhelming number of people are addicted to things they feel like life wouldn’t be worth living without. But inside they know it’s actually taking that life from them.

What I have witnessed and experienced is that God’s healing love can break the chains of addiction over and over, transforming anyone who will come to him and let him be the leader of their lives instead of the drugs or alcohol.

Trust me when I say God’s love is even bigger and more powerful than whatever you’re addicted to.

Regardless of how we found that freedom one thing is true:

God has been with us the entire time and his constant, relentless, overwhelming love over these last twenty years has now given all of us something truly worth living for. I can gladly say with joy in my heart that life is not worth living without his love.  You can know His love today too.

Copyright © 2020 Lifeword.org . All rights reserved. No part of this article may be reproduced or reprinted without permission in writing from Lifeword.org