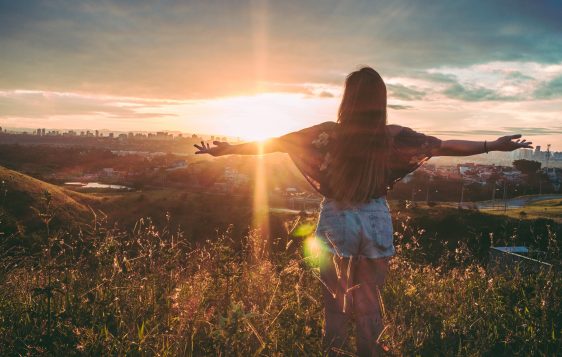 I’m not sure when it happened, but by the time I had children of my own, I had forgiven my dad for leaving our family.

Thirteen is not a good age to have to watch your father permanently walk out on the family. Eleven is not a good age, either. Those were our ages, my brother and me, and after a very long year and a half of not having him in our home, my mother announced that the divorce was final.

Divorce? Wait a minute, that wasn’t supposed to happen.

My dad had left us another time before, but that was years ago, and I had shoved it way back into the deep, dark recesses of my mind. It was never discussed then, and it had only been vaguely referred to this time, so her announcement was a shock.

The embarrassment of it all marked my middle and junior high school years. Being normal is a very important thing at that age, so I certainly didn’t tell my friends that my dad wasn’t around. I had one friend whose parents were divorced, but there weren’t too many other people I knew whose fathers weren’t in the picture, so I kept my mouth shut. Pride… a real problem for a teenager who wanted people to believe her life was perfect.

Finally in the ninth grade, I told one friend…just to test things out, see what kind of reaction I got. “What?” she said. “You’re kidding! I’m so sorry. Are you OK?” I guess I was afraid of being judged or, to use a current social media term, being “un-friended.”

Nope. All I got was pity. She just felt sad for me, but the earth continued to revolve around the sun and life went on…

I’ve always told my mom she should have written a book called How to Make Divorce Easy on Your Kids. She never uttered a negative word about my dad, worked two jobs to get us by and encouraged a relationship with him.

Encourage is not a strong enough word. It was really more like she insisted or forced us to.

She would interrogate us about how long it had been since we talked to our dad. If our vague, teenager-y response was “I don’t know, mom…” she would tell us to dial that phone right now…no, I’m serious, you sit right down there and do it!

Talk about pride… It can’t have been easy to swallow hers for our sake, but she knew our relationship with our father was important. Must have been hard, but you wouldn’t have known it.

Through it all, one other thing in my life kept me on the right path…the love and care I received from my Savior and from my church family. Church friends young and old sustained me with prayer, kind words, rides to activities, and encouragement. I certainly wasn’t becoming anything more than a pew-filler, but Jesus was pulling me to himself and away from the world. Even though I didn’t deserve it, he never let go of me.

When college, young adulthood and marriage came along, something got lost along the way. Communication with my dad became more and more infrequent. Oh, I never, ever doubted that my dad loved me…that was never a concern, but we had a disconnect somewhere along the way.

He had been the best dad he knew how to be, but I hadn’t forgiven him. That was it. That was the problem. I had been clinching my fists in unforgiveness so tightly that there were fingernail marks on my palms. I had shoved the pain so far back in my brain and shut the door so tightly that I could pretend it didn’t exist.

Through those years and so subtly that I don’t have any memory of how or when it happened, God changed my heart. Suddenly forgiveness was just there, a part of my life. I realized that I had unclenched my fists so my palms could heal. I had opened the door and let in some light so I could see.

My dad never apologized for leaving us. He never acknowledged that leaving us had caused great pain. But somehow I didn’t need that apology or acknowledgement.

To loosely reference Philippians 1:6, He who began a good work in me was faithful to complete the process of forgiveness in my heart. God had worked such an incredible heart change that I no longer needed to hear the words, “I’m sorry.”

God’s timing on that was pretty remarkable, as it always is. Maybe He knew it would be important when I became a parent to let go of the pain and be free from the bondage of all that emotion, all those feelings.

*We have the power of the Holy Spirit that intercedes with “wordless groanings” when we don’t know what to pray for. (Romans 8:26)

*We are commanded to forgive, because Jesus forgave us. (Ephesians 4:32)

Real forgiveness can happen in your life today. How do I know? Because a hurt, scarred and embarrassed young girl left all that pain in the past so she could be free.

“But one thing I do: Forgetting what is behind and straining toward what is ahead, I press on toward the goal to win the prize for which God has called me heavenward in Christ Jesus.” (Philippians 3:13-14)

Paul’s words about leaving the past behind are key to the forgiveness process. My dad is dead now, and my brother desperately wanted to hear I’m-sorry-please-forgive-me, but he never will. His soul, I’m afraid, will never be at rest.