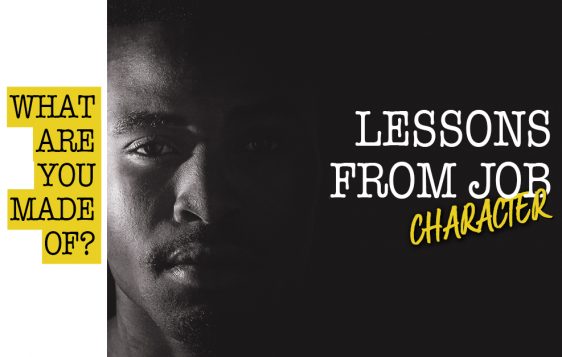 One of my mentors has taught me a great lesson on character. His name is Job.

Even though we’ve never met personally, I feel like I know him pretty well. (We were introduced through a mutual friend.)

Notice how Job is described in the Old Testament book that bears his name:

“There was a man in the land of Uz whose name was Job; and that man was blameless, upright, fearing God and turning away from evil. Seven sons and three daughters were born to him. His possessions also were 7,000 sheep, 3,000 camels, 500 yoke of oxen, 500 female donkeys, and very many servants; and that man was the greatest of all the men of the east.” (Job 1:1-3)

I think it’s very significant the order in which Job was described.

First, he was described by who he is – “blameless and upright.”

Then he was described by what he does – “fear God and turn from evil.”

Lastly, he is described by what he has – all of his possessions.

That order is important. We tend to get it backwards. If we aren’t careful, we can easily fall into the trap of defining our own lives by what we have, followed by what we do, and ending with who we are.

Don’t forget: Your character is more valuable than your possessions.

“A good name is to be more desired than great wealth; favor is better than silver and gold.” Proverbs 22:1

When we define our lives by what we have, we end up feeling dissatisfied, empty, and unhappy.

It was obvious that Job was more concerned about the character of his life than the accumulation of his stuff, because the day came when all his earthly possessions were taken from him. Instead of shaking his fist towards heaven screaming, “My life is ruined!” Job postured himself in a position of worship and proclaimed, “Blessed be the name of the Lord.”

Just in case you are aiming at the wrong target, let me give you a few steps to help you grow forward:

1. Be thankful for what you have.

In our unending quest for more stuff, sometimes we fail to remember all the stuff we already have. We are a people with TONS of STUFF.

If you ever question how blessed you are, begin to make a list of all the ways God has blessed you. Once you get started, you’ll have a hard time stopping.

2. Be satisfied in Christ.

That’s what Jesus meant when he said, “Seek first His kingdom…”

The easiest way to find out if your heart is too attached to your stuff is to start giving it away. If there is a “thing” in your life you can’t give away, you may have just stumbled upon an idol of your heart.

So what would my mentor Job have done if it came down to choosing between his restored character or his restored riches? He would have turned his back on his accumulated stuff and fallen down in worship and praise to God.

Copyright © 2020 by Andy Comer @ https://www.andycomer.org. Used with permission. No part of this article may be reproduced or reprinted without permission in writing from Lifeword.org.