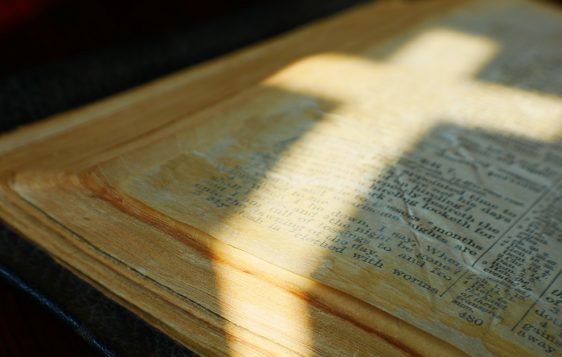 Many Christians, while thumbing through their Bibles,  have pondered why Scripture is broken into two, uneven halves.

Is one better than the other?

Is one old and obsolete and the other new and improved?

Do they both matter today anyway?

To answer these questions, it helps to have a working understanding of what actually goes on in the pages of Scripture.

Here’s the super-quick breakdown of God’s Story. (And, as you’d guess, it all starts with the Old.)

[Creation] History opens with God creating everything. In this first scene, we see the triune God forming everything out of nothing: galaxies and gophers, stars and sand, and comets and cattle. Everything. For the crowning moment of his creative work, God makes mankind in his image. Then, he declares everything he made good.

[The Fall] God created mankind, of which the first was a duo named Adam and Eve, in order for them to enjoy a relationship with him. The relationship was perfect – but, it didn’t stay that way long. Sometime after creation, Adam and Eve chose their way over God’s way. This initial act of treason against God spiraled our world into chaos, turmoil, and heartache.

[The Nations] God, in his grace, didn’t bring swift judgement on mankind. Instead, he does something altogether amazing: He tells Adam and Eve that a Rescuer is coming – but, he doesn’t say when.

What started as two people becomes many more. Then before you know it, nations, kingdoms, and people groups scatter the globe. God chooses to work in a special way through one nation, Israel, with the plan that this one nation would bless all the others.

As the earth’s population increases, so does its corruption. God sends prophets to call the people to repentance. Some listen, most don’t. Then, after sending the Prophet Malachi, God goes silent.

No words from God.

No overt signs that God still cared.

God’s people, thinking that God was done with them, closed off the Scripture with Malachi.

But, God wasn’t through, He was just getting started – He was starting something New.

[Jesus] God, breaking the silence in an unprecedented way, became one of us. Leaving behind the glory of heaven, Jesus made it personal by seeing our chaos, experiencing our turmoil, and feeling our heartache. Unlike our father Adam and all men after him, Jesus was tempted but was without sin. He called us to repent and choose to follow God. He performed miracles and signs to prove that he was exactly who he said He was.

[The Cross] But, we rejected Him. We didn’t believe Him. We did more than that – we killed him. Despite our hatred, God had plans we couldn’t see.

We thought we had murdered Jesus, but Jesus had rescued us.

We thought we didn’t need Jesus, but Jesus proved we don’t have hope without him.

[The Church] After three days in the grave, Jesus rose from it and conquered death. This resurrection was witnessed by hundreds and changed the course of human history forever.

The Old and New tell one story – the story of Jesus.

You can’t have one without the other. The Old sets up the for the New and the New completes the Old.

Let’s put it another way: God, loving his creation, sent Jesus to rescue and redeem mankind from the Fall through His death on the cross – so that the people of all the nations might be saved and become part of the global movement called the church.

That’s God’s work throughout history – the breathtaking story of love and redemption:

That’s God’s work throughout history – the breathtaking story of love and redemption:

The story of Jesus.

Copyright © 2019 by Stephen Castleberry @ stephencastleberry.com. Used with permission. No part of this article may be reproduced or reprinted without permission in writing from Lifeword.org.