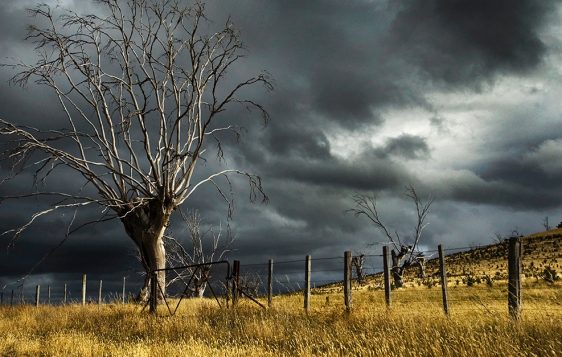 Late one evening, Jesus and the disciples boarded a boat to cross the Sea of Galilee to the other side of the lake. Almost immediately, Jesus fell asleep in the front of one of the boats. This had been a long and difficult day, and in his humanity, Jesus was tired.

As they were crossing the Sea of Galilee, a great storm arose without warning.

Just north of the Sea of Galilee is Mount Herman that is approximately 9,200 feet in elevation. Strong and cold northerly winds often sweep down off Mount Herman and then down the upper Jordan Valley with great force. When the cold winds from the north meet the warmer air over the Galilee Basin, storms arise very quickly.

The Greek word seismos, from which we get the English word seismic, is translated in these passages as the word storm. The word literally means, “a shaking” or “commotion.”

The storm was so violent that it shook the water in the lake as if it were a glass of water in the hand of a man. It was so severe that the waves were sweeping over the sides of the boat and the boat was in danger of sinking.

No doubt some of the disciples were frantically bailing out water, others were pulling at the oars attempting to row, while still others wrestled with the sail.

The disciples were afraid and thought they were going to die.

And Jesus was sleeping through it all. In a panic, the disciples shook Jesus and to be heard above the howling of the wind, shouted, “Lord, save us!  We’re going to drown!”

The disciples accused Jesus of being insensitive and not caring that they were all about to perish in the storm. They thought they had run out of solutions to the storm in their lives and had nowhere else to turn to but Jesus, and that is exactly what God wanted them to do (and us too!).

When Jesus awoke, he spoke to the wind and the waves of the sea and said, “Quiet! Be Still!”

The Greek word phimoo is translated into English as “be still” and it means “to be muzzled.”  Jesus told the storm to be “muzzled.”  Apparently, there was a greater power behind the storm – the power of Satan (Job 1:18, 19).

Because we only “muzzle” living things, Jesus was using an anthropomorphic term to describe the source of the storm, the devil. The devil sent the storm to harm Jesus and the disciples, but the Lord turned what was meant for evil into something good.

Jesus used the occasion to teach the disciples that the Son of God has power over nature.

Jesus asked the disciples why they were “afraid,” which means, “timid” “fearful,” or “cowardly.”

However, I’m sure they wanted to ask Jesus why he was not afraid.

In fact, Jesus asked them, “Haven’t you seen enough of my power and experienced enough of my love to know that you are perfectly safe with me?”

And the next time a storm comes into your life, you need to ask yourself that very same question.

When Jesus told the wind and the waves to be still, immediately the wind ceased to blow, and the sea became calm. The disciples reacted to this miracle by asking one another, “What kind of man is this? Even the winds and the seas obey him?”

The fact that the disciples were amazed at the power of Jesus is certainly nothing to condemn them for.

Certainly, we believe God can do all things, but when he does answer our prayers, we too are amazed.

God’s power is so much greater than we can fathom, a believer will continually be amazed when it is displayed.

The purpose of this miracle was to teach the disciples to trust in and depend upon the Lord.

Jesus asked the disciples, “Where is your faith?”

Jesus wanted his disciples to understand that no matter how devastating the storms seem that sweep into their lives, he cares for them and doesn’t want them to drown.

He cares for us too.

The point is Jesus should be the object of our faith, and when storms arise in our own lives, we should trust in our Deliverer.

God allows storms in all of our lives to strengthen us—not to shipwreck us.

Even though the storms in our lives are very troubling to us, they are not troubling to God. God never gets panicked or distressed. And nothing takes him by surprise or catches him off guard, even if we think life is rocking our boat.

Remember, the Savior of the world cares about you, and he has power over the wind and the waves with only a word. So surely he can handle the problems in your life too that seem capsizing.

Copyright © 2019 by Jeff Swart @ http://jeffswart.com . Used with permission.
No part of this article may be reproduced or reprinted without permission in writing from Lifeword.org.