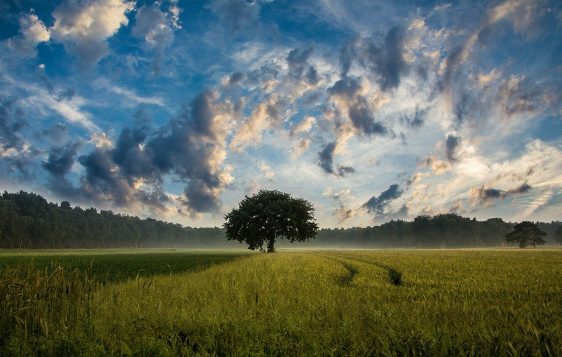 My husband and I had the chance to take a small vacation in the Smoky Mountains.

When we arrived at the cute loft apartment we were staying in, we were taken aback by how beautiful everything was. Also, amazingly, everything we needed was provided for us – even snacks, coffee, throw blankets, magazines and even a first aid kit in case of an emergency.

It was so thoughtful that all of these things were provided.

In Genesis 1, we get a glimpse of creation. So far, we have seen the creation of the world itself, the light and the atmosphere. Now, on Day three, we see something new being formed – Land.

God creates the land and the sea on the third day. But the amazing thing to me here is God takes time to point out something in particular – the fruit-yielding trees.

God thought of everything.

Notice that it says, “whose seed was in itself.”

Not only did God provide a meal, but He provided for the future. He designed trees to produce fruit continuously. And when their seeds were planted, more trees would grow.

The trees were fruitful and would multiply and make more fruit-bearing trees.

We too are supposed to be like the trees by bearing fruit, multiplying and planting seeds of the gospel. As those seeds, or people, become discipled and fully grown, they will also plant seeds of their own and more people will come to know Jesus and so on.

God created the tree on the third day, which is what Satan would use to try to destroy God’s creation through Adam and Eve. And a tree would also be used to put God himself to death – Jesus Christ.

God provided a tree that would be used to put the Messiah to death as a sacrifice for humanity. The tree would be used for Christ to pour out His innocent blood to cover our guilt.

God died for us, and in doing so, he provided for our future – with a tree.

What a beautiful picture creation gives us of our loving, merciful and all-knowing God!