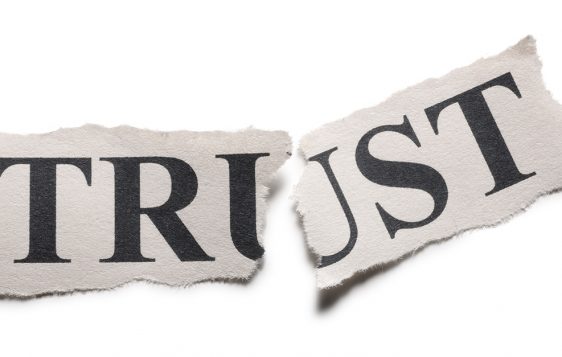 I have heard it said that given enough time everyone will eventually let you down. That sounds harsh and maybe you disagree. Unfortunately, it seems realistic to me – except for God and dogs. God and dogs will never let you down. The rest of us probably will at some point.

Some of these disappointments come from simple disagreements or mistakes. They are a little like “relational misdemeanors.” They should not permanently damage the relationship, though they often do. One of the great tragedies of life is the number of relationships that are damaged unnecessarily over relatively minor offenses.

Then we have those disappointments that leave a lasting hurt. They are not easy to let go. We feel a need to strike back. The offender doesn’t deserve to be forgiven for what they did. These are “relational felonies” and they likely will have a lasting impact on the relationship even if reconciliation occurs. Even when we can forgive, we can rarely forget.

Beyond those hurts, we also have devastating disappointments brought about by overt acts of betrayal. These are the “relational capital offenses.” They often destroy the relationship completely. Reconciliation is sometimes out of the question and maybe rightfully so. While we are commanded to forgive, we are not commanded to reconcile a relationship that sets us up for more damage. There are simply some relationships that should not be reconciled, period.

So. Does a relational capital offense always deserve a relational death sentence? Should seemingly unforgivable and overt acts of betrayal always put reconciliation out of the question?

Apparently, there are some relationships where reconciliation is desirable even after unimaginable acts of betrayal.

Before we go to trial, maybe you will allow me to serve as your law clerk for a moment. Maybe I can sort through some case histories for an example of a relationship worthy of reconciliation even after a despicable act of betrayal.

If ever there was an offense worthy of a relational death sentence, it can be found in the relationship between Jesus and Peter.

By all accounts, Jesus had invested a great deal of effort in the life of Peter. It seems that Peter was one of the most prominent members of Jesus’ inner circle. It was only because of Jesus that Peter had been elevated into a position of leadership and authority. In short, Peter owed Jesus everything. They really had a close personal and professional relationship. Surely, Jesus could always count on Peter.

Not once but three times!

That seems like a slam dunk case of betrayal to me. Perhaps the first time was a moment of weakness under extenuating circumstances- a relational misdemeanor worthy of forgiveness. But there is no excuse for the second time- a relational felony deserving considerable consequences. And with the third strike, you’re out – relational capital offense. Relationship over without a chance of reconciliation!

Fast forward through the trial, crucifixion, and resurrection of Jesus and we find Peter and the guys out fishing one morning. Up on the beach, there just happened to be a guy cooking breakfast over a campfire. And that guy just happened to be Jesus. Quite a coincidence, don’t you think?

You would think that given what had happened, Jesus would be the last person that Peter would want to see and vice versa. But a remarkable thing happened. When Peter realized it was Jesus on the beach, he jumped out of the boat and hurried to him.  What could he have been thinking?

But none of that happened. No raised voices, no criticisms, no demands, no retaliation, no cold shoulder. In fact, there was no drama at all. Instead, these remarkable words of Jesus:

Are you kidding me? After all Peter did, Jesus just said “Come on, let’s eat”

THE MODEL FOR RECEIVING GRACE

The grace extended to Peter by Jesus is a grace that I can’t understand, but it is a grace available to you and me. Despite his feelings of guilt and remorse, Peter moved toward Jesus. That was all Jesus needed for reconciliation of the relationship. That’s all he needs from any of us.

Perhaps our actions have not been as blatant as the betrayal by Peter, but I think it is safe to say that all of us have betrayed Jesus in some way at some time. Just like Peter, all we need to do is to come to Jesus. We too can expect Jesus to be waiting for us when we do. We also can hear the invitation to “Come on, let’s eat”.

THE MODEL FOR EXTENDING GRACE

3. Jesus did make the first move when he inquired if they were catching any fish. Sometimes a seemingly tiny step cracks open a closed door.

4. When the door opened for reconciliation, Jesus avoided the need for placing blame, criticism, demands, and retribution. Instead he opted for “Come on, let’s eat”. That’s a tough one!

5. After the initial reconciliation, Jesus did ask some pointed questions and set some boundaries for the relationship. There may be a need for us to do the same.

6. After he returned to Jesus, Peter’s failures were never held against him. The relationship thrived and Peter was even elevated to a higher prominence than before. It is indeed possible for restored relationships to soar to new heights.

Regardless of your situation, remember that there is always an open invitation from Jesus to you to:

Take advantage of the offer!

Copyright © 2020 Lifeword.org by John Chapman. All rights reserved. No part of this article may be reproduced or reprinted without permission in writing from Lifeword.org