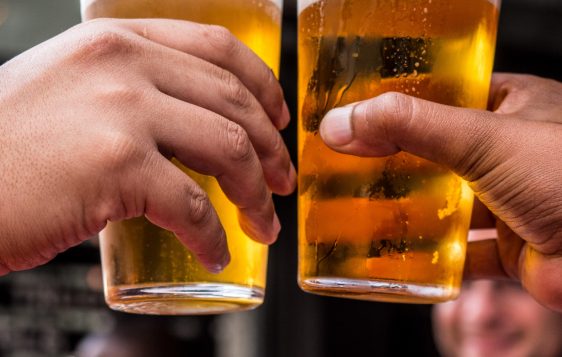 There’s something beautiful about a restored relationship between a child and their father.

At one time, I was angry with my father for choices he was making. I had always helped him when he struggled with alcohol, but I thought maybe if I played the tough love role it might work. Maybe if he didn’t think I would be there to help next time…just maybe he would stop.

So it had been a while since we talked. When we had, it was short and straight to the point, and I told him as long as he was drinking, I would have nothing to do with him. That was hard to say. We were so close and things had been so good for a long time. But this was his choice, I convinced myself.

I remember sitting in the parking lot of Barnes and Noble and getting the call from him that he needed me. He needed help, he said, and he was ready to change. I told him I wasn’t messing around, and if I helped, he would have to keep up his end of the bargain. I made a few calls, and then I drove to his home.

I’d love to say at that moment the relationship was restored, but it was far from it. In his eyes, the rehab center wouldn’t take him unless he was drunk. So he drank, a lot, and there he was, lying on the bed with only his underwear on and blood smeared on his head and face.

I desperately searched to see if he was alive and where the blood came from. Soon, I realized he had fallen and caught his ear on the edge of the nightstand and didn’t bother to stop the bleeding.

I woke him up and was angry because he was drunk and nothing was ready. I stormed around his room throwing clothes into a suitcase. I gave him clothes to put on and I helped clean him up. I helped him to the car and buckled him in.

On the outside, I seemed as cool as a cucumber. Internally, I was struggling. My emotions were all over the place.

Why should I have to do this?

Why should a child have to take care of a parent like this?

Anger, frustration, resentment, irritation, sadness, hurt…the emotions whirled through me one right after the other. I loved him and I wanted better for him.

Didn’t he realize his decisions affected more than just him?

But soon that relationship was restored. Treatment was going well; I came every time there were visiting hours. I hated I couldn’t just make a phone call and take him home, but he needed to be there and go through the process. We had good talks and even laughed a few times.

He asked if I could ever forgive him, and of course my answer was “I already have.”

Malachi warned that a day of judgement was coming for the wicked, but He would send a prophet who would encourage restoration before the great day of judgment: “His preaching will turn the hearts of fathers to their children, and the hearts of children to their fathers. Otherwise I will come and strike the land with a curse” (Malachi 4:6).

In order to restore broken relationships, there must be admittance of wrongs and confession of sins. Unity would then be restored. This isn’t just between father and son, but between the children of God and their Holy Father, the Lord our God.

Just as I looked at my father and wanted to help him make the right decisions, Jesus looks at me that way. I pleaded with him to do the right thing.

I wanted to make it all go away but then, would he ever truly change? He needed the pressure and the raw cuts to his pride, ego and way of life to finally reach the point where he needed help.

God says he works on us in the same way, making us like jewels: “They will be my people,” says the Lord of Heaven’s Armies. “On the day when I act in judgment, they will be my own special treasure. I will spare them as a father spares an obedient child” (Malachi 3:17).

God is faithful, my friends! Does your relationship with the Lord need restoring? Come to the Father today!