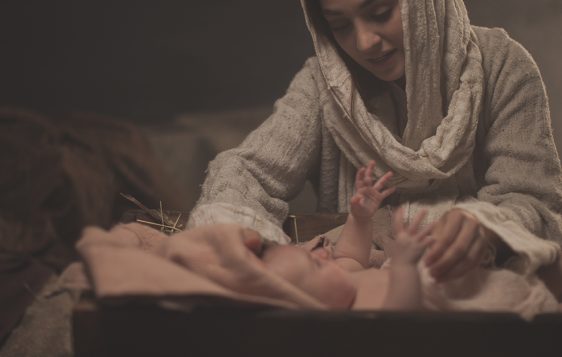 I know it sounds wrong to say but Christmas really is a strange time of year in some ways. For instance . .  .

What other time of year would you see a mom forcing her terrified toddler into the arms of a strange bearded man at the mall?

When else do you see people competing to see who can wear the ugliest sweater?

Why is it OK for that snowman to smoke around all those little kids?

Even so, I love Santa, Frosty, and Rudolph as much as the next guy and they are welcome at my house anytime. Even the Grinch is welcome here.

It probably sounds even worse to say that the biblical Christmas story also seems strange, but you can’t get around the fact that it does. You’ve got angels appearing to shepherds in a field somewhere in the middle of the night, a baby being born in a stable, and a virgin giving birth. As the saying goes, “You can’t make that stuff up!”

Of all the things about the original Christmas story that amaze me, the most amazing is God choosing to come to earth as “just a baby”.  He didn’t have to do it that way. He could have come as an adult royal king, a saintly priest, or whatever he wanted. But God chose to come as “just a baby”. Why that choice?

He would shower compassion on those that others called “just a whatever”.

He would rebuke his own disciples when they exhibited “just a child” attitudes by trying to keep the children from bothering him.

Even as Jesus approached death on the cross, he rejected “just a thief” thinking as he assured the thief of a place with Him in eternity. It seems clear to me where Jesus stood on “just a _____” thinking.

At the core of some of our biggest human failings are these “just a _____” attitudes:

They have allowed otherwise honorable people to at times accept acts of discrimination.

They have misled people who are basically not evil people to somehow justify abortion.

They have sometimes fostered child and elder neglect.

They have encouraged politicians to view their thinking as superior to that of their constituents.

They have sometimes discouraged churches from serving those that Jesus specifically meant for them to serve. And the list goes on and on.

Relationships can never thrive when someone is looked on with a “just a _____” attitude. There are no words more hurtful than describing someone as “just a (whatever it might be)”. That “good will to men” thing cannot coexist with these attitudes. God never looks at anyone from a “just a ______” viewpoint and neither should we.

It is safe to say that most of us have been on either the giving or the receiving end of “just a _____” words or attitudes at some point in our lives. As a result, we have experienced moments of hurt ourselves or inflicted moments of hurt even if we never intended to do so. Perhaps the Christmas story should cause us to pause and reflect for a moment:

—1. If you have felt the sting of being looked on as “just a ______”, please know that is not how God sees you. Never did, never will. He had a perfect blueprint in mind when He created you. He dearly loves you regardless of anything you have done or what anyone says about you.

Never accept what anyone else may say about you without first discovering what God says and know that God never refers to you as “just a anything”.

—2. If you come to the realization that you have harbored some of these attitudes, the suggestions would be the same. If you are on speaking terms with God, acknowledge it to him and seek his help to banish that thinking from your soul. That is not who God intended you to be and with his help, you can recognize and overcome it.

If there are those that you realize you have hurt, consider whether it is possible to remediate that hurt in some way. If you are not on speaking terms with God, seek out a godly advisor to help you. If you do not know of someone you can trust for godly counsel, just reach out and ask a nearby church for a recommendation even if you have no intention of ever visiting their church. There are people willing to be of help, but you must reach out for it.

So, as we celebrate the birth of Jesus, it would seem appropriate that we seek to follow his examples, and one of those examples is the rejection of “just a _____” thinking in all its forms.

What would our world look like if that example became a reality in all our lives?

Copyright © 2019 Lifeword.org by John Chapman. All rights reserved. No part of this article may be reproduced or reprinted without permission in writing from Lifeword.org