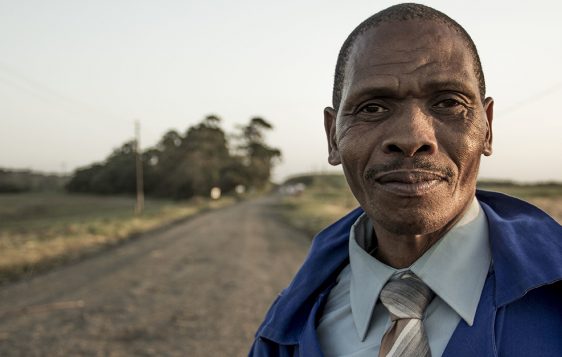 It was another cold, rainy day in Washington, D.C.

Steve, an African American in his late 40s, was making his usual rounds, picking up complete strangers, playing Christian music in the background, and trying his best to be genuinely nice to people he had never met and would probably never see again.

His Uber app notified him for another pickup, five minutes away near Union Station. He made his way through the never-ending traffic lights and aggressive drivers that littered downtown D.C.

He saw a young lady hold up her phone with the correct color, blue, that notified she was his next drive. He stopped the car, and when she climbed into the back seat, he made sure her name was Louisa.

She was in her young twenties, with brown hair pulled back into a ponytail as her blue eyes hid behind a pair of silver, metal-rimmed glasses. Her face was a puffy red from either the cold or her crying. She stared down at her phone, but Steve could tell she seemed troubled.

Steve began to pray for her, as he did for every person he drove.

He was a retired government IT contractor and he spent his days driving Uber, not for the money, but to look for opportunities to tell people about Jesus.

He spent his afternoons volunteering at a Bible college, helping as an administrator for their IT (Information Technology) department as well as teaching a couple classes on the side. He was married with two kids, a daughter who served as linguist for the Marines and spoke seven languages and a son who was in high school taking quite a few AP classes.

Steve noticed a tear roll down the side of Louisa’s face. He had attempted to make small talk, starting with the weather, butit didn’t seem like she wanted to talk.

Then, all of a sudden, a familiar voice touched his heart. God convicted him to tell this young lady that he, the God of the universe, loves her.

Steve tried to argue with God for about ten seconds.

Steve took a deep breath, said a quick prayer, and looked at Louisa with compassion in his dark brown eyes. He said, “Louisa, God wants you to know that he loves you.”

The young lady started to break down into tears.

He said, “God’s been trying to reach out to you, but you have been avoiding him. God knows you are pregnant, but he loves you, do not be afraid.”

Louisa, with a bewildered look on her face, said, “How did you know? I’m only four weeks pregnant.”

Louisa, while crying, shared her story with Steve. She had a three-year-old son and had never been married to the father . . . Her parents shunned her when she announced her pregnancy with her oldest child. She was scared of how they were going to react when she told them about the baby inside her from a boyfriend who was already long gone . . . since they had already rejected her once.

She had been trying to go to church, and members had tried to reach out to her and her son, but she was running away, and she felt hopeless and helpless.

How could God love her?

How could anyone love her?

Steve said again, “God loves you. And he died for you so you could have an abundant life.”

Louisa, hands trembling, took out an orange bottle with a white cap full of pills.

“I was planning on swallowing all of these today,” said Luisa. “But now I’m not going to.”

Now Steve was crying, and he had to take off his glasses to wipe his eyes. They had already reached their destination, an apartment complex just outside the city.

Steve asked if he could pray with her and for her.

After Louisa had already left the white Lexus, Steve bowed his head again in prayer.

“Lord, thank you. You have saved this woman’s life, and I am in wonder and awe. All glory goes to you, God.”

His phone pinged again, notifying him that another person needed a ride. With a smile on his face, Steve pulled out onto the wet street, looking forward to being able to pray for the next person God wanted him to talk to.

*Based on a true story

Copyright © 2020. No part of this article may be reproduced or reprinted without permission in writing from Lifeword.org.