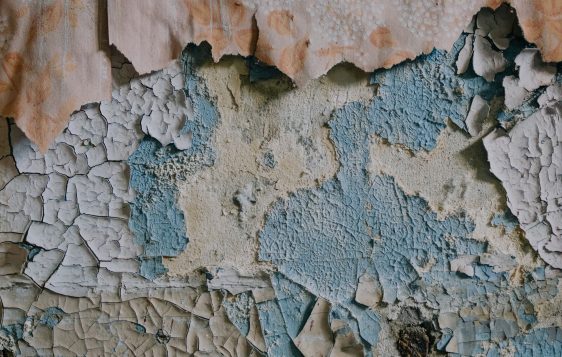 Paint, brushes, spackle, hammer, nails, drill, screws, tape measure, putty knife… it was all laid out. I was ready for this remodel.

I bought this cute little house from a nice man and it seemed like a great deal. There were only a few tiny things to update, but the house was in decent shape and he said he had already done the major improvements.

So, I began peeling off the layers.

That’s right, layers. It wasn’t just one or two, but there were 4 layers of wallpaper! And they weren’t that old.

“No big deal,” I told myself, someone just liked wallpaper.

But as I peeled back the last layer, where the fridge would go, the secrets were revealed. I know, this is the part of the story where you think it would be awesome to find a hidden door that leads to a secret room filled with treasure and amazing antiques… But this isn’t that kind of story, and this wasn’t that kind of house.

With the wallpaper peeled away, the wall actually moved.

I pressed my fingers to it, trying to see what was happening, and I was able to push it in and out. The wall wasn’t attached to anything! There were no studs. It was a piece of paneling that had been placed with wallpaper holding it up!

And that wasn’t the only place.

As I pulled the paper away from behind the stove, blocks of wood began to fall. There was a huge portion of what should have been a wall that was random pieces of wood placed there, and once again, held by the wallpaper.

I didn’t have the money to fix it all at once, so little by little I did upgrades when I could. But then the “practically brand-new air unit” messed up, the septic tank backed up, the floor under the bathroom rotted, the “new” roof was leaking… and there I was left with a money pit.

When I bought the house, he made it seem like was in great shape, but the truth was revealed after a time. I was angry, hurt and embarrassed that I had been taken advantage of.

He had seemed like he was doing me a favor by selling it to me for that price. But I hadn’t known the whole truth and I should have had someone check it out. I was too “independent,” too rushed to have my own house, and too quick to agree.

My desire got in the way of my judgment.

Jacob, in the book of Genesis, was also blinded by his desire for Rachel.

When Jacob met Rachel at the well, it was love at first sight! He knew he wanted to marry her. So, he went to her home to meet her father Laban, his mother’s brother, and his family which included an older sister, Leah.

Jacob stayed with them for a month and then his request was made known to Laban that Jacob wanted to marry Rachel. He had no dowry to offer, as was the custom in those days, so he agreed to work for Laban seven years for her hand in marriage.

When the seven years were complete, Jacob rightfully asked for his wife. Laban held a great feast, and that night, he sent in Leah to be with Jacob instead of Rachel.

“And in the morning, behold, it was Leah! And Jacob said to Laban, “What is this you have done to me? Did I not serve with you for Rachel? Why then have you deceived me?” Laban said, “It is not so done in our country, to give the younger before the firstborn.”(Genesis 29:25-26)

Jacob had been deceived.

Sure, Laban would let him work for his daughters’ hand in marriage, but Jacob didn’t know the customs of their land – and Laban didn’t offer up any additional information.

His oldest daughter had to be married first, and Jacob’s desire for Rachel made him foolishly rush into a decision.

He didn’t read the fine print.

We also can rush into decisions when our desires win us over.

Ignorance is no excuse.

Do you realize that’s true with your spiritual life as well? God has given us everything we need in order to know Him, accept Him and be saved. And we overlook the truth for what we want, what our flesh desires.

Whatever you are trusting in, if it’s anything other than truth laid out in the Scriptures, it will lead to destruction.

It will lead to death and an eternity in hell.

You might be surprised if you peel back the layers of your walls… the truth will be revealed. So don’t settle for face value.

Dig into the word. Search the scriptures. Study them.