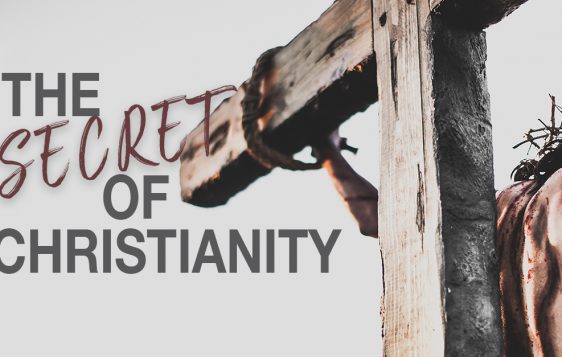 The secret of Christianity is that God has given us himself. That’s the prize.

And many Christians today have lost that in the weekly hibbaroo (made that word up, but I’m proud of it) of church life. I personally get this mixed up more often than I’d like to admit. I can get so caught up in doing this Bible study and that service event, or telling people I’ll pray for them (sometimes forgetting to!), or even comparing my outward righteousness to that of others. I get lost.

When we do this we start to look like Pharisees, actually. These were the Tier One Spiritual Gurus of Jesus’ day, or so they thought. Problem was they lived for the hibbaroo. Not for God. They had zero interest in Jesus’ glory. Instead, the Pharisees held up the Law and fawned over their diligence at keeping it, making little poses with each other like tourists with selfie sticks.

And they believed in their earned righteousness so much that the commoners around them believed they were the best, too. Everyone thought they were the holiest of all.

All but Jesus. He knew they were actually the furthest from God.  Their external embellishment, and spiritual adorning, and self-righteous fawning cloaked their internal corruption.

For Him or for you?

The Pharisees are represented by the older brother. While the younger brother runs off into personal ruin, he stays to work. The catch is that he has no interest in Jesus (represented by the father) either! His whole mindset is, “If I just toil these fields I’ll get my due.  If I work hard enough I’ll get what I deserve.”

That’s very different from what Christians desire. Remember, the secret of Christianity is God. Feasting with him. Spending time with Jesus. That’s our prize, that’s the secret sauce.

Today, the hibbaroo we settle for is: “If I just pay my religious dues, jump through my hoops, do church and nice-talk, then God will stay off my back, give me what I’ve earned, and we’ll call it even.”

This is not Christianity! It’s Pharisee Living 101!

This is called self-righteousness, which can plague us and our churches. If all of my religious activity is simply to get my due, then I hate God. Why? Because I’m doing “God stuff” for me, not for Him. There is no relationship. No feasting. No secret sauce.

In fact, this sort of mentality is no different from that of an atheist. Just gonna do my due and get what’s deserved.

Who’s (frighteningly) absent from the feast?

No wonder that older brother isn’t at the feast (representing heaven) by the story’s end. Whoa, talk about Jesus bloodying up the nose of the whole religious system with a single punch! That “wretched younger brother” (as the older brother believed) is feasting while the obedient, upright, but rotting-on-the-inside older brother is outside.

He’s been closer to his father in proximity the whole time, but he’s always been the furthest away.

The secret of Christianity is that God has given us himself. It’s what true Christians want, and so we seek God. For Him. Not for personal gain.

So let’s confess our self-righteousness, burn our pride, claim Jesus as our prize, join the feast, and let the party begin! Knowing the whole time that this will be a process to daily repeat until we finally enter that eternal Feast.

Copyright © 2020 by Justin Talbert @ https://getgroundedministries.com . Used with permission.
No part of this article may be reproduced or reprinted without permission in writing from Lifeword.org.