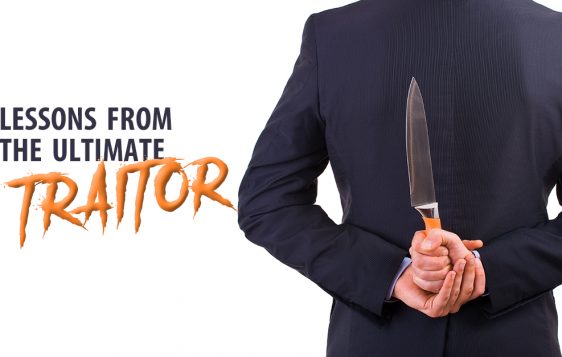 Even if you’ve never read the Bible, you know who he is and what he did. Thesaurus.com lists Judas as a synonym for traitor, and if someone called you a “Judas” he or she would say it with disgust and hatred.

Probably not gonna name your child after him.

He has been beaten up over and over again in secular history and literature as well. The Inferno portion of Dante’s the Divine Comedy, written in 1320, gives a gruesome account of the ninth circle of hell where Judas has allegedly been cast and tortured for eternity. The medieval church believed in a punishment-fits-the-crime scenario for sinners where each descending circle was worse than the last.

Yep, according to the epic poem, Judas was at the very bottom of the pit. So what do we know about this guy?

The most notorious and universally scorned of Jesus’s disciples is Judas Iscariot, the betrayer.

Every time Judas is mentioned in Scripture, we also find a notation about his being a traitor. His name appears last in every biblical list of Apostles, except for the list in Acts chapter one, where his name doesn’t appear at all. In every list, he is referred to as a traitor.

He is the most colossal failure in all of human history.

No individual was ever more clearly led by Satan than Judas was. Interestingly, Judas was the only one of the twelve Apostles who was not from Galilee.

We are told very little in the Scriptures about Judas.

All we know is:

So, how did Judas betray the King of Kings? Well, in Judas’s case, it started with the scribes wanting to kill Jesus. But then, Judas made a deal for some petty cash to hand him over after the last supper in the garden of Gethsemane (John 18:2-9).

With a kiss, he marked Jesus as the one the Roman soldiers needed to arrest (the ones the priests sent from Pilate) after leading them there (Matthew 26:49)

Sadly for Judas, his life ended with a guilt-filled suicide after throwing the money back at the priests.

However, Judas was given three chances by Jesus himself to reconsider before the deed was done.

So, in summary, Judas was numbered among the ministry of the Apostles and was accepted as one of the twelve. When he betrayed Jesus, he did not fall from grace, because he was never saved in the first place (1Corinthians 12:3).  Furthermore, his life was under the control of Satan (Luke 22:3).

Matthew tells us Judas was seized with remorse after the betrayal (Ma­tthew 27:3). Some have wondered if the repen­tance of Judas was real. However, the Greek word used to refer to the actions of Judas means, “to regret,” “to be concerned,” or “emotional re­morse.”

Judas was sorry he did what he did, but he was not moved to the point of salva­tion!

The New Testament teaches us two important truths from the life of Judas:

Judas’s life was a tragedy . . . He spent years following Jesus, seeing miracles, hearing the Word being spoken from his mouth and experiencing his love and compassion firsthand.

But Judas became jaded, bitter and disappointed. He didn’t see Jesus as worth it, and he decided to get personal gain from turning him in.

But Judas is probably not alone.

How many people go to church, do “religious” works, and try to be good?

How many people dedicate their lives to ministry and burn out?

How many people depend on themselves for salvation (instead on the creator) and then fall away?

Judas knew it all. He could quote scripture, and he literally walked with the Messiah for three years! But that doesn’t mean his heart was right before God.

But Jesus still loved for him, and he died for him, even though he knew from the second he called Judas to be a disciple that Judas would betray him.

Because Jesus loved Judas, that shows his love for mankind. If you think you are too far gone or not good enough to come to God, well, Jesus offered life to the man who would turn him over to die.

Jesus loves you and he wants to be in a close relationship with you.

Don’t get comfortable thinking that reading your Bible or going to church or doing good “stuff” is enough to save you. If Judas spent three years with Jesus and rejected him in the end, there is a danger in getting comfortable and becoming prideful in who we are . . . when we are only sinful human beings that God has chosen to create and to love and to die for.

Learn from Judas, but don’t be him.