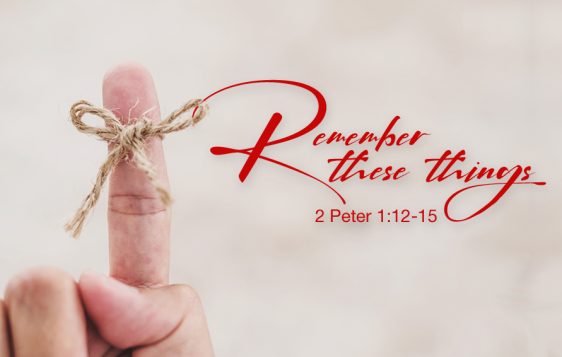 Peter wrote, “So I will always remind you of these things, even though you know them and are firmly established in the truth you now have. I think it is right to refresh your memory as long as I live in the tent of this body, because I know that I will soon put it aside, as our Lord Jesus Christ has made clear to me. And I will make every effort to see that after my departure you will always be able to remember these things” (2 Peter 1:12­-15).

Peter felt that he would be negligent if he did not remind his audience of some basic truths of the Christian life. The Lord told Peter that his earthly sojourn was almost over, and because Peter knew the time of his departure to be with the Lord was near, he wanted to remind these people that he loved so dearly of some spiritual truths so that they would not forget them after his departure.

If you have ever lost a parent, a sibling, a spouse, or a child, I’m sure you remember the last words that were spoken. Often, the last words spoken cut to the heart of the matter and state what is really important.

Because Peter’s epistle is his last opportunity to communicate biblical truth, he cuts to the heart of the matter.  He doesn’t talk about peripheral issues— he talks about the core issues of life.  So we’ll focus on the reality, richness, responsibilities, and the rewards of salvation:

#1 The Reality of Salvation

Peter opens his letter with these words:

2 Peter 1:1-2: “Simon Peter, a servant and apostle of Jesus Christ. To those who through the righteousness of our God and Savior Jesus Christ have received a faith as precious as ours: Grace and peace be yours in abundance through the knowledge of God and of Jesus our Lord.”

Notice that Peter described himself as “a servant”. The Greek word translated as servant literally means “one who gives himself up wholly to another’s will” and referred to “a third-level galley slave.”

In the movie Ben Hur, Charlton Heston played the leading role of Judah Ben­Hur, who was arrested and sentenced to serve as a rower on a Roman ship with multiple decks where slaves rowed. On that third and worst level a slave’s feet were always in the water and no sunlight or fresh air reached them. In his humility, Peter described himself as a “slave” rowing on the lowest level of a ship.

Peter could have said some very flattering things about himself, instead he introduced himself as a “servant”.

We too are just “servants of the Lord Jesus Christ.” We cannot brag about anything we have or anything that we have done, because the truth is that everything we are—we are because of him!

Peter identified then told us to whom the letter was written: “To those who through the righteousness of our God and Savior Jesus Christ have received a faith as precious as ours.”

Peter was writing this letter to men and women that have been saved by the grace of God, people that knew what it was like to be lost and who had also experienced the new birth. If you have a personal relationship with Jesus Christ, then this letter is also written to you.

Peter also explained how we received this “precious” faith. We received it “through the righteousness of our God and Savior Jesus Christ”.

Salvation does not come through our own “righteousness” but “through the righteousness of our God and Savior Jesus Christ.” You and I have no righteousness to offer God.

In fact, if you could take the best out of every man that has ever lived since Adam and put it into one man, that man would still need to be saved. I didn’t learn much in math class, but I did learn that no matter how many times you multiply something by zero the answer is always zero. God says that our righteousness adds up to zero and if you multiply zero by any number of people that have lived on this planet since Adam was created, the answer is still zero righteousness!

Not only is salvation real, but Peter also said that it was rich. Peter expressed one of the great truths of the Christian life when he said, in 2 Peter 1:3: “His divine power hath given unto us all things that pertain to life and godliness.”

Peter specifically identified God as the source of the two greatest blessings we have: “life” and “godliness.”

The Greek word translated to life literally means, the life of the Spirit.” Peter is referring to God’s eternal life that is bestowed to believers through the work of the Spirit. Once again, we see Peter’s theme that eternal life is a gift of God and not something that we earn by our good works.

Peter further said that God is also the source of “godliness.” The Greek word godliness refers to holy Christian living and refers to the manifestation of external life. I cannot see what’s in your heart but what I see in your life is an indicator of what is in your heart.

God is everything you need to be transformed on the inside and on the outside. Just as a baby is born with all the component parts needed to become a fully functioning adult, so every born again believer is equipped with everything necessary to become a fully mature saint. God’s creative, eternal, saving, and sustaining power is the source of everything we need to be saved and live a godly life before a watching world!

Salvation is the gift of God, but this does not absolve a believer from personal responsibility for the way he lives. Peter challenges believers to do the best that we can for God and to give more than a minimum effort through these eight virtues. On Calvary, God gave us his best and it only seems logical that, if we are grateful, we will give him our best.

Deeveloping these eight virtues require hard work. All of them must be a continual part of the Christian life.

Peter then shared the rewards that will be given to a believer who has an abundance of these eight virtues in his or her life:

2 Peter 1:8­11: “For if you possess these qualities in increasing measure, they will keep you from being ineffective and unproductive in your knowledge of our Lord Jesus Christ. But if anyone does not have them, he is nearsighted and blind, and has forgotten that he has been cleansed from his past sins. Therefore, my brothers, be all the more eager to make your calling and election sure. For if you do these things, you will never fall, and you will receive a rich welcome into the eternal kingdom of our Lord and Savior Jesus Christ.”

If we obey Peter’s command and these eight virtues are a part of our life— then our Christian life will be effective and fruitful for God and our relationship with Jesus Christ will be both personal and intimate.  A believer should not merely have these eight virtues, but they should be increasing in a believer’s life as time passes.

If these eight virtues are not present, Peter describes this believer as:

Peter said that if a believer lacked these eight virtues, he would be ineffective, a word that could literally be translated as “out of work.” Carnal Christians have no place of service in God’s kingdom. They are idle and slothful, which are condemned as sins in the Bible.

Peter said that if a believer lacked these eight virtues, he would be unproductive a Greek meaning “barren and unproductive” and referring to a life crowded with the pleasures and cares of this world.

The Greek word translated as nearsighted is the word muopazo from which we get the English word myopia. Myopia is a disease where the eye focuses less than twelve inches from the face. The person with this disease cannot see things that are far off. You are focusing on what’s close—the immediate and earthly and not the future and eternal. The dictionary even defines myopia as a lack of foresight or discernment.

Peter states that a Christian without these eight spiritual virtues in his or her life is “blind” and, although the word can refer to physical blindness, in this verse it refers to “mental” blindness. They are blind to the greatness of salvation, to the teaching of God’s Word, and to the knowledge that a Christian’s life will be examined before Christ.

2 Peter 1:11: “And you will receive a rich welcome into the eternal kingdom of our Lord and Savior Jesus Christ.”

This summary verse presents the Christian life as a journey. It begins as one accepts Jesus Christ as personal Savior and it ends with a warm welcome into heaven. The problem comes with the steps between these two points.

Peter describes the steps between salvation and heaven when he spoke of the eight virtues, which are presented these as a progression. He said, “ . . . add to your faith goodness; and to goodness knowledge,” etc.  There is an order that must be followed which begins with personal faith and ends with sharing God’s love with others. Each virtue builds on the previous one until the believer has reached spiritual maturity. In other words . . .

A set of stairs has steps, a recipe has instructions, a school has grade levels, and the Christian life has 2 Peter 1:5­8.

Copyright © 2021 by Jeff Swart @  http://jeffswart.com No part of this article may be reproduced or reprinted without permission in writing from Lifeword.org.