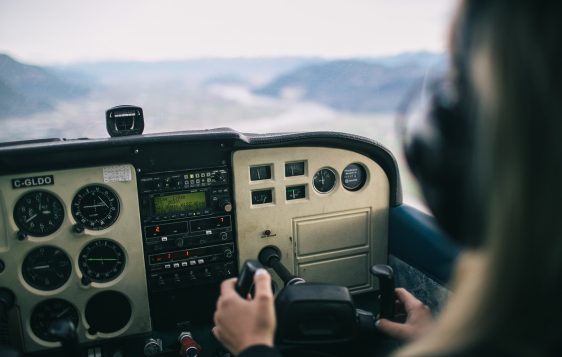 Just a few months after being hired on at KAIT-TV as a reporter, my news director, Randy, asked me how I felt about joining the morning show. They were interested in doing live shots around the area to catch events, weather and traffic as they were happening.

Every morning, Keith and I would load up the live truck with equipment and head out. Not a whole lot of news happens at five a.m., so we often had to improvise. We did theme weeks sometimes highlighting different holidays and seasons: a spa week for Mother’s Day, hunting and fishing week for Father’s Day, bull riding and roping for the rodeo and a gazillion others.

Keith usually had me doing something crazy to get a “wow” from the viewers and I was constantly saying, “You want me to do what?!”

One week was “flying high” themed and we highlighted different types of aircraft and organizations. One day, I was towed up into the air in a sail plane. It didn’t have an engine; it only used the heat to give us a boost like birds do.

Another day, we were at Camp Robinson in Little Rock learning about drug eradication with helicopters.

Did I mention I’m afraid of heights?

So, we are up in the helicopter, flying over fields when the pilot said, “Take the stick.”

Keith said, “Yeah, that would be awesome, do it!”

Noah may have felt the same way when God asked him to build a big boat that would take him a century to construct.

Noah was a man who found favor with God while everyone else in the entire world had forsaken the Lord.

God tells Noah of the coming destruction via rain (by the way, rain didn’t exist yet) and promises to save Noah and his family in a boat. Yup – a boat.

Maybe at this time Noah might have replied by saying, “Yeah sure God… But uhm what’s a boat? What’s rain? How am I going to get all the animals inside this thing?”

But all we know is Noah went to work after God gave him the instructions in Genesis six.

“So make yourself an ark of cypress wood; make rooms in it and coat it with pitch inside and out. This is how you are to build it: The ark is to be three hundred cubits long, fifty cubits wide and thirty cubits high. Make a roof for it, leaving below the roof an opening one cubit high all around. Put a door in the side of the ark and make lower, middle and upper decks. I am going to bring floodwaters on the earth to destroy all life under the heavens, every creature that has the breath of life in it. Everything on earth will perish. But I will establish my covenant with you, and you will enter the ark—you and your sons and your wife and your sons’ wives with you. You are to bring into the ark two of all living creatures, male and female, to keep them alive with you. Two of every kind of bird, of every kind of animal and of every kind of creature that moves along the ground will come to you to be kept alive. You are to take every kind of food that is to be eaten and store it away as food for you and for them.” (Genesis 6:14-21)

Do you realize how HUGE this thing is?

A few years ago, a replica of the ark was built in Kentucky to educate people about the ark and it is massive! But every detail, every square inch of the ark was designed by God. Noah was just the builder.

What would you have done?

What would you have been thinking if God instructed you to build this?

“Noah did everything just as God commanded him.” (Genesis 6:22)

Noah did not complain.

Noah did not questions God.

Noah obeyed and showed he was a true man of faith.

What about you? What has God told you to do and what has been your response?

Not responding is still an answer.