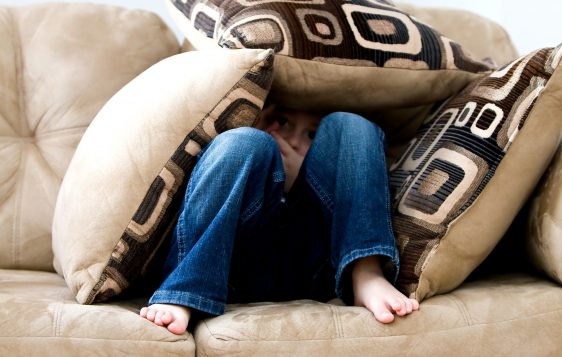 Last year, my two nephews and niece came to stay with us for a few days.

We enjoyed time on the farm, playing outside, baking strawberry squares with Grandma and playing in the loft.

We have lots of books and toys in the kid’s play area, and I’ve even set out my Wizard of Oz collection for them to play with.

Yes, that’s right. I have an Oz collection – Barbie dolls, books, little figurines, a Polly Pocket castle, etc. It’s not doing any good sitting in a box somewhere, so I let them play with it.

It was getting close to time for the kiddos to head home, but with an hour or two left, my niece started acting funny. She said she wanted to be left alone, needed “me” time and didn’t want anyone to bother her.

I tried talking with her thinking her feelings were hurt and she just buried her head in the pillow. So, I figured the boys had upset her or they weren’t letting her boss them around with her, “Let’s pretend to be princesses and sprinkle pink glitter while riding on our unicorns through the rainbows,” ideas. Which, by the way, we do that and it’s awesome, so… I let her be.

As I walked out of the room, I noticed one of my musical snow globes in the room. It was usually out on the shelf, but I figured she had been looking at it.

We gathered their things up after that and my niece was picked up and then I took the other two home.

It wasn’t until later as I was cleaning up that I finally realized why she was acting so strange.

As I pulled the sheets from the bed to wash, I reached to get a pillow, and lying there, now exposed, was the Scarecrow and Dorothy. Two tiny little figurines who had once been in a snow globe.

And my niece hid it out of guilt. But now, now I knew. Her guilt was written all over her. She didn’t want to be caught, and of course, she made her best efforts to hide what she had done.

I wasn’t upset. My grandfather had some gorilla glue he had been dying to use, so I let him work on the figures for a bit and now they are back in their rightful place outside the city of Oz. But, I did want her to know she had to own up to her mistakes, admit her wrongs and confess her heart.

Just like Adam and Eve needed to in the garden of Eden.

“Then the eyes of both of them were opened, and they realized they were naked; so they sewed fig leaves together and made coverings for themselves. Then the man and his wife heard the sound of the Lord God as he was walking in the garden in the cool of the day, and they hid from the Lord God among the trees of the garden.” (Genesis 3:7-8).

“And they realized they were naked.” This is a huge statement. Satan had deceived them. He told them only part of the truth. He let them assume it was the fruit that would open their eyes, not their sinful disobedience to God.

Immediately, they wove fig leaves together for a covering. But who were they covering themselves from? They were husband and wife. There were no other people there. It was just them and God.

They knew in that moment of their guilt and they tried to cover it.

They even hid themselves from God. Doesn’t that seem ridiculous? I mean, how do you hide from the all-seeing, all-knowing God?

I can imagine Eve whispering to Adam, “The trees will hide us! He will never see us here!”

Doesn’t it seem child-like, like the actions of my niece?

Why do we do the same then?

We try to hide our own sin, cover it up, run from it and hide our faces in shame. We hope no one will find out so we won’t have to live with the consequences, but ultimately, God knows.

YA’LL… listen! He knows! I’m going to shout it louder… HE KNOWS!

He knows that awful thing you did.

He knows the things you said, the stuff you took, the lies you told, adulterous, murderous, filthy things you’ve done.

And yet, He still chose to die for YOU.

“But God demonstrates his own love for us in this: While we were still sinners, Christ died for us. Since we have now been justified by his blood, how much more shall we be saved from God’s wrath through him! For if, while we were God’s enemies, we were reconciled to him through the death of his Son, how much more, having been reconciled, shall we be saved through his life!” (Romans 5:8-10)

We are saved from wrath.

Do you get that? Christ died for you knowing you would be a sinner. He died so you would have a chance, a life eternal with God the Father in heaven. He did that for you and me.

Look at verse 21 of that same chapter in Romans.

“So that, just as sin reigned in death, so also grace might reign through righteousness to bring eternal life through Jesus Christ our Lord.” (Romans 5:21).

Praise God. Seriously. Stop what you are doing and praise Him!

God you are so good. We are so undeserving. Your abundant and amazing grace fills our souls. When we were at our darkest, your light was at its brightest.

You are the Savior. The Redeemer. From you, we cannot hide.

You know everything about me – my thoughts, my actions, my spoken words my betrayal… And I bow before you, confessing my hearts and my innermost secrets.

Father forgive me – my life is yours. Teach me. Wherever you lead I’ll go.

It’s your will Lord, not mine. Mold me into the person you want me to be – one you can use for your glory and for your kingdom.

Teach me your Word. Guide me through the pages of Scripture. Help me to teach it to others so they too can witness your loving kindness and awesome power.