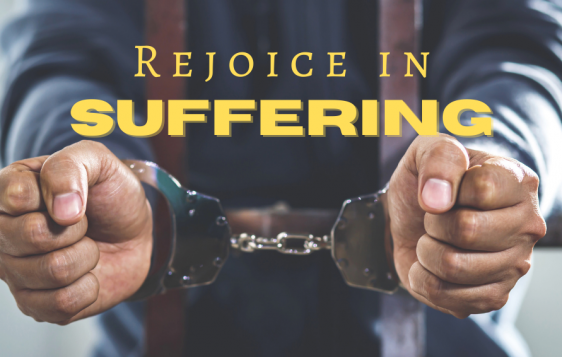 Or worse – something you deliberately didn’t do and goes against your entire character?

Have you ever been pushed or kicked out of a job because someone lied about you?

Have you ever gotten the short end of the stick in a situation where you felt like you deserved more?

Our favorite patriarch Joseph did. Except in his case, he was wrongly imprisoned for over a decade.

I recently wrote about Joseph who was sold into slavery by his beloved brothers (who covered it up by faking his death) and then sold to Egypt’s captain of the guard – Potiphar.

He didn’t throw a pity party when all this happened to him; instead he worked hard and God blessed him in everything he did and allowed him to be successful.

Things were finally looking up for Joseph. He was Potiphar’s go-to guy, the favorite once again and had a future he thought was once lost.

Perhaps, if he kept working hard, he could be set free and make his way back home or build a life for himself in Egypt.

Unfortunately for Joseph, someone besides Potiphar started taking notice of him – Potiphar’s wife!!

The Bible says Joseph was a handsome young man. And back in the day, it wasn’t so uncommon for women or men to have sex outside of marriage – vows were considered worth breaking if the person was desirable enough.

Thus, Potiphar’s wife had no qualms about approaching Joseph and telling him straight up, “Have sex with me” (Genesis 39:7).

But Joseph refused. “Look,” he told her, “My master trusts me with everything in his entire household. No one here has more authority than I do. He has held back nothing from me except you because you are his wife. How could I do such a wicked thing? It would be a great sin against God.”

Atta boy, Joseph! This is why we like this guy. In the face of temptation –  because I bet she was desirable and he was a young man who wasn’t married – Joseph said “not today – not ever.”

You’d think she would have received the message and laid off, but no. She probably scoffed, laughed it off, and considered Joseph a challenge.

Every day, she’d ask him the same thing – but he continued to refuse to sleep with her and he kept out of her way as much as possible.

He played it smart. Instead of tantalizing himself with temptation, he deliberately avoided her. Sadly for him, one day no one else was around when he was working . . .

She came and grabbed him by his cloak, demanding, “Come on, sleep with me!”Joseph tore himself away, but he left his cloak in her hand as he ran from the house.

Joseph fled from temptation. This is something we could all learn – don’t dwell on whatever seeks to tear you apart from God. Run in the opposite direction!

Joseph got away, but though he avoided temptation, he could not avoid what would happen next:

“When she saw that she was holding his cloak and he had fled, she called out to her servants. Soon all the men came running. “Look!” she said. “My husband has brought this Hebrew slave here to make fools of us! He came into my room to rape me, but I screamed. When he heard me scream, he ran outside and got away, but he left his cloak behind with me.”

She kept the cloak with her until her husband came home. Then she told him the same story. Potiphar was furious when he heard about how Joseph had treated her.

So he took Joseph and threw him into the prison where the king’s prisoners were held, and there he remained.

In summary . . .  Potiphar’s wife was furious that she was rejected or had to make up a reason to why she had assaulted Joseph, and instead of coming clean, she instantly lied and claimed Joseph raped her . . . when really, she was kind of sexually assaulting him. (Think about it, in modern times, if your boss’s spouse came to you and ordered you to go to bed with him/her, you think that’d fly?)

Her husband was so angry, and rightly so considering he believed his spouse over Joseph, that he threw him into the highest security prison in Egypt! And threw away the key! Potiphar was never going to try to get Joseph out.

Once again, Joseph had been screwed over. For the second time, he ended up in a bad situation that was not by his doing.

But once again – there’s a silver lining. The Bible says God doesn’t leave him alone:

God, once again, showed him his faithful love and caused everything he did to succeed.

And like Joseph, God doesn’t abandon us either. He reveals his love to us through every trial, temptation, struggle, and horrible circumstance.

If God’s love can penetrate through the darkest prison chamber, so too does he share his love with you wherever you find yourself today.

That doesn’t always mean he will change your circumstances, but he will be with you every step of the way.

“We also rejoice in sufferings, knowing that suffering produces endurance, and endurance, character, and character, hope. And hope does not disappoint, because the love of God has been poured out in our hearts through the Holy Spirit who was given to us.” (Romans 5:3-5)

Copyright © 2021 by Melody Turner @http://mxtv.show No part of this article may be reproduced or reprinted without permission in writing from Lifeword.org.