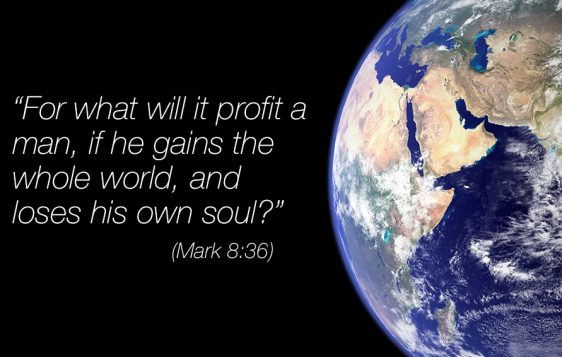 Not many people can claim they have ruled the world. However, three men have ruled every territory that was known at the time they lived:

the Greek – Alexander the Great

I’m sure that a few of us want to know, “What’s the view like from the top?”

Alexander the Great was partying after a huge military victory and suddenly fell ill and died within ten days.

Julius Caesar was murdered by his trusted associates and best friend.

Charlemagne, in spite of all his weaknesses, ruled well and his subjects loved him.  He died of natural causes, but when he was buried, he was placed in his sepulcher sitting upright on his throne. By his decree, a Bible was placed beside him with his index finger pointing to a single verse of Scripture.  “What was the Scripture, you ask?”  It was the words of Jesus: “What will it profit a man if he gains the whole world, and loses his own soul?” (Mark 8:36)

Many of us think that true significance in life comes by what a man has accumulated or has accomplished:

– winning the World Series or the Super Bowl

– being selected as new artist of the year

All are big deals at the time, but who can name the team who won 10 years ago?  Who was the most valuable player four years ago?  What group received the award for album of the year seven years ago?  It seemed so very important at the time but now most of us can’t even remember who won.

If we really understood how quickly life passes for all of us, and how little time we have to enjoy the things we have exchanged our life for, would we be spending as much time as we do acquiring things and seeking recognition?

It is said that Alexander the Great instructed his advisors that when he died to cut two holes in the top of his coffin and stick his hands out through the holes so that all could see that he carried nothing out of this world. It’s true. You’ll never see a U-Haul trailer being pulled by a funeral coach!

On the day of my death, it will not matter how many people knew my name, how much money I earned in my lifetime, or how many honors that my peers bestowed upon me.  The only thing that will matter on the day of my death is my relationship with Jesus Christ.  We must never forget the words of Christ in Mark 8:36,

What will it profit a man if he gains the whole world, and loses his own soul? (Mark 8:36)

Copyright © 2021 by Jeff Swart @  http://jeffswart.com No part of this article may be reproduced or reprinted without permission in writing from Lifeword.org.