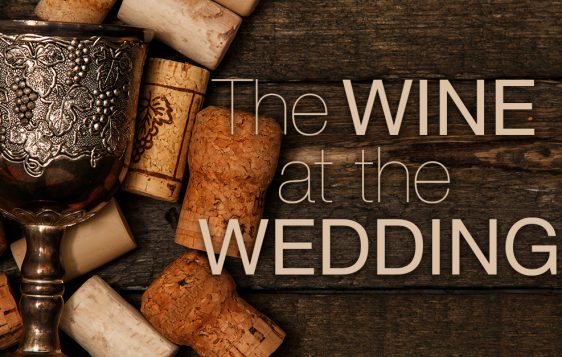 John 2:1-10 chronologically records the first miracle recorded in the Bible that Jesus performed: Turning water into wine at a wedding.

It’s found in John’s account as the header of many biographical accounts, so it stands as the forerunner, or as a descriptor, of all of the great things Jesus did with his life while he was here on earth.

So this begs a very strong question: Why is this story significant enough to be the first among his great works? It seems pointless that Jesus is merely correcting a party foul (running out of wine).

There are much deeper things to consider. For example, Jesus was at a wedding party and, like most people who attend weddings, he was thinking about his own future wedding.

JESUS AND HIS FUTURE WEDDING

YAHWEH is Israel’s God in Hebrew Scripture (as he is still ours today), and he often likened himself to Israel’s husband.

God wants a relationship so deep and rich with relational equity that it’s like a healthy marriage.

God is jealous for us like a man who passionately pursues the one whom he loves.

Jesus does this with us the in same way. He thinks of us as his bride that he’ll one day be united with . . .

For Jesus, this is a common image of the kingdom of God, and this is clearly Jesus’ life goal – to accomplish the means by which this wedding will take place. So at this wedding party, his own wedding (the kingdom) was obviously on his mind.

It’s the explanation for his very peculiar response to his mother’s urgency about running out of wine.

In the story, Jesus’ mother runs up to him (probably in a panic) and says, “They have no more wine,” and his response is, “Woman, why do you involve me? My hour has not yet come.”

It’s a very unhelpful response to her situation, but Jesus responds this way because he was deeply musing about his “hour.” Still he proceeds to do what was on his mind and creates wine from the water.

The wine, although literal, is also a symbol of something far greater, a symbol that he will mention later in John’s account.

The water Jesus used to turn into wine in this story wasn’t ordinary water, and this is really the key in understanding the parable. The text says that the water was put in six stone water jars used by the Jews for “ceremonial washing.”

This water would have been used by the Jews to enter the temple where the presence of God resided.

Jews needed this water in order to draw near to God, to come into his presence.

They needed to be “clean” before they entered into God’s presence.

Jesus was intentionally using the water jars that were used for cleansing to foreshadow his blood as the ingredient for our requirement to draw near to God. But it was wine that filled the water jars, not his blood.

Yet it was a glass of wine that served as a symbol for his blood at the last supper, also recorded in the Gospel of John (chapter 13).

Jesus was communicating that it will be his wine (his blood) that will cleanse us, and that’s the connection.

JESUS IS THE TRUE PROVIDER OF THE WEDDING CELEBRATION

The master of the banquet mentioned in the parable did not deliver on his job. In fact, the wine that was originally provided wasn’t even as good as what Jesus provided (John 2:10).

The purpose of the story is to communicate that Jesus will ultimately be the provider at our wedding celebration. The day when he and his people will be united in perfect harmony. His bride will be his glory, and he will be our reward.

He has given himself as a means to provide all that we need in order for this celebration to be a reality.

Our life was bought by his death, and our celebration and glory will be given to us because of his humiliation and pain.

Although we turn from God, he pursues us still in the person and work of Jesus.

We don’t deserve a wedding, but by the grace of God we will have one in the most beautiful and powerful way, and we will be his forever.

And in this relationship to come we will be completely satisfied, as he is completely glorified and honored.

On the third day a wedding took place at Cana in Galilee. Jesus’ mother was there, and Jesus and his disciples had also been invited to the wedding. When the wine was gone, Jesus’ mother said to him, “They have no more wine.”

“Woman, why do you involve me?” Jesus replied. “My hour has not yet come.” His mother said to the servants, “Do whatever he tells you.” Nearby stood six stone water jars, the kind used by the Jews for ceremonial washing, each holding from twenty to thirty gallons.

Jesus said to the servants, “Fill the jars with water”; so they filled them to the brim. Then he told them, “Now draw some out and take it to the master of the banquet.”

They did so, and the master of the banquet tasted the water that had been turned into wine. He did not realize where it had come from, though the servants who had drawn the water knew.

Then he called the bridegroom aside and said, “Everyone brings out the choice wine first and then the cheaper wine after the guests have had too much to drink; but you have saved the best ‘til now.”)