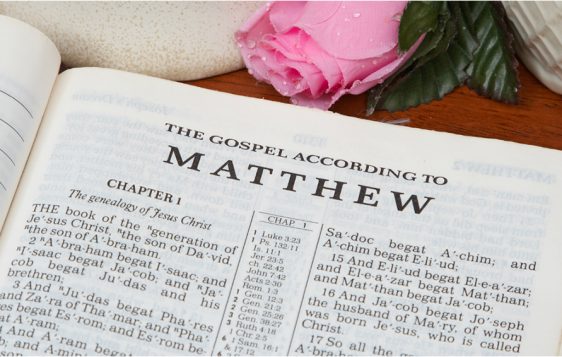 (The following is a transcript from Stephen Castleberry’s YouTube series: Bible Tidbits. Follow the link below to view the video.)

Have you ever wondered why they are four accounts of the life of Jesus in the New Testament? Why do we need four? Why not just one . . . or MAYBE two. Why would God go out of his way to put four Gospels in the Bible?

Okay, let’s talk about the four Gospels in the Bible: Matthew, Mark, Luke, and John. Why would God want to include four different accounts of Jesus‘ life? Isn’t that wasted space in the Bible? I mean, we’ve all traveled somewhere before and had to pack a bag. You can’t take everything—you’re limited by the size of your bag and the weight of the bag if you’re flying. There are certain things you need to make sure you pack before you bring along duplicates—you’ll want to make sure you have enough shirts packed before you add a second, third, or fourth pair of shoes, right?

So why did God pack four Gospel accounts into the Bible? He had to have a purpose, right? We don’t know for sure, but I do think we have some really good ideas as to why God did it this way. This is a “duh” statement, but Jesus Christ is the central figure of Christianity—it makes sense that a large bulk of the New Testament would be biographies of him.

Even today, there are multiple biographies of famous people. George Washington has over 5,000 on Amazon. Steve Jobs and Walt Disney have over 1,000 each. Even Johnny Cash has over 400 biographies on Amazon. Here’s the thing—each of those biographies is unique. Yes, all 5,000 are about one man: George Washington, but they all have a unique take on his life. It’s the same for the accounts of Jesus—they all tell the same story about the same guy, but each from a unique perspective.

That’s why even when we see different Gospel writers write about the same event, different details come to light each time. John Burleson, my pastor while I was in high school, put it like this once in a sermon: “If something is broken in my house and I interview my two sons about what happened, I expect to hear similar but not exactly the same stories. Each boy will tell it his way using his personality and I’ll get different details in each story.

Having two accounts on what happened gets us the truth. If their stories are identical—down to the very last detail—I know they rehearsed their story and it’s a lie.

I thought that was a great way to explain it—that’s probably why I have remembered it for almost twenty years! We can trust the four accounts of Jesus’ life because they tell the same story about the same person but each with different perspectives and details. So why do we have four Gospels? So we can get four unique perspectives on Jesus all recorded by reputable people all within the same generation that actually saw Jesus.

That’s what Luke was getting at in the first four verses of his Gospel. He wrote: “Many people have set out to write accounts about the events that have been fulfilled “among us.” lf the Gospels were written by people who were still alive during the time of Christ these claims could have been disputed by eyewitnesses if they were false. Luke continues: “They used the eyewitness reports (Note that “they used eyewitness reports.”) circulating among us from the early disciples.

Having carefully investigated everything from the beginning, Luke was an academic and a researcher—he hunted down leads and verified claims. He said: “I also have decided to write an accurate account for you, most honorable Theophilus, so you can be certain of the truth of everything you were taught.” Who was Theophilus? So these four biographies were either written by eyewitnesses or were written by people who interviewed eyewitnesses, all to give us similar—but intentionally unique—accounts of the life of Jesus.

Let’s quickly look over these four and see what makes them unique:

He was a disciple of Jesus and therefore an eyewitness himself. Matthew was a Jewish man who grew up steeped in the Old Testament and prophecies about the coming Messiah. In many ways, the Gospel of Matthew is the connecting link between the Old Testament and the New Testament, making the intended original audience Jewish people because—through his unique perspective—he proves that Jesus is indeed the promised Messiah. The major theme of this Gospel is that Jesus is the King and has an eternal Kingdom—that’s why Matthew’s genealogy of Jesus connects to King David and Abraham.

If you ask people to name four of Jesus’ twelve disciples, many  people will say, “Matthew, Mark, Luke, and John!” You know, the four writers of the Gospels—but, they’d be wrong! Mark and Luke were not part of the Twelve. Mark was born roughly fifteen years after Jesus, making him in his late teens during the ministry of Jesus. He had two names—John and Mark. John being Hebrew and Mark being Greek.

You can find him in Acts 15 as he tags along with Paul and his cousin Barnabas. So where did he get his information when writing his Gospel? From Peter. Mark and Peter were close friends and shared common personality traits like being action-oriented and impulsive. That’s why Mark’s Gospel is the shortest, contains no Christmas story and frequently uses words like “then,” “at once,” and “immediately.” If you like getting to the point, Mark is your man and your Gospel. His unique perspective was bridging the information gap between the Jewish Messiah and Gentile (non-Jewish) Romans. Being heavily influenced by Peter—the guy who was shocked when Jesus washed his feet—Mark focuses on Jesus as the ultimate Servant.

Being an academic and a researcher, Luke’s account is the longest, most comprehensive Gospel and is the first part of a two-part account. Part One, Luke, is the account of Jesus. Part Two, Acts, is the account of the early church. You should really read them back to back—fascinating stuff!

Concerning heritage, Matthew was all Jewish, Mark was a blend of Jewish and Greek, but Luke was all Greek. As a matter of fact, Luke is the only non-Jewish author of any part of the Bible. Luke never met or saw Jesus—he probably came to Christ as a result of the ministry of Paul. His unique biography of Jesus is very investigatory, very methodical, well-researched, and academic. When I was in Bible college and studying Greek, I would pray that our Greek exams would not be from anything Luke wrote because his words were all big, high-end words. I wanted my exams to be from Peter or John—those guys were fishermen by trade and used very simple language. Luke wrote to an educated Greek audience and focused on Jesus being the Son of Man—that’s why Luke’s genealogy goes all the way back to Adam.

John was a disciple of Jesus and wrote his eyewitness account after the other three. The first three Gospels are often called the Synoptic Gospels because they share many of the same events from the Life of Christ. John is different. Instead of retelling the story a forth time, his unique perspective is to tell us what the life of Christ means.

So what does this mean for us? You can trust the accounts, the biographies, the Gospels of Jesus. God intended that all four be included in Scripture to not only buttress each other but to also bring out unique details of the life of Jesus. Jesus is the King, the Servant, the Son of Man, and God Himself. He fulfilled the Old Testament prophecies. Jesus completed his mission, was the perfect man, and  is the divine Son of God. That’s who Jesus is.

For years now, my church—Antioch Georgetown—has supported Lifeword and I could not be any more thankful that they do so. Lifeword is a media ministry that tells the story of Jesus all over the world in many languages and in many contexts. Just as Matthew, Mark, Luke, and John all told the story of Jesus in a way their particular audiences would understand, so Lifeword presents the Good News of Jesus in a unique way to hundreds of people groups around the world. If you’d like to learn more and to partner with Lifeword, visit Lifeword.org.

Copyright © 2021 by Stephen Castleberry @ https://www.youtube.com/watch?v=-h5WJw-V6UI . No part of this article may be reproduced or reprinted without permission in writing from Lifeword.org.