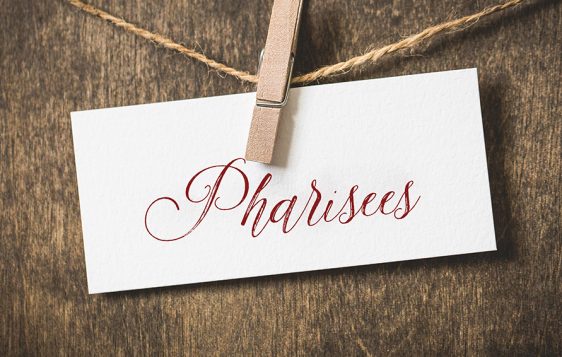 The Pharisees, the Sadducees, the Herodians, the Zealots, the Sicarii, the Essenes.

These are the six groups that formed between the Old and New Testaments—five of which are mentioned in the Gospels and Acts. The most well-known group is Pharisees. So who were they and where did they come from?

Numbering around 6,000, Pharisees were the largest of these six groups at the time of Jesus—numbering around six thousand. Mostly middle-class businessmen, traders, and merchants, they were leaders of the synagogue movement. Synagogues being secondary places of worship that sprung up during the Intertestamental Period and second only to the Temple in Jerusalem itself.

History isn’t clear on the origins of the Pharisees, but we do know what Pharisee means: “separated ones.” Pharisees separated themselves from the public as scholars and interpreters of the Law of Moses. In their personal lives, they stressed personal piety to the point that they tithed from their spice rack—I’m serious, but we’ll talk about that in a minute.

The Pharisees saw all of what we call the Old Testament as the authoritative Word of God. They also held many beliefs that both Christians and Jews hold today: the believe that God is active in history, that angels and demons exist, that there will be a bodily resurrection of the dead, and that there is an afterlife. They did what we would call missionary work and actively tried to bring people to know God. One thing you probably know about the Pharisees is they added extra laws—called oral laws—to the Law of Moses.

Now I’m about to walk a fine line here and make a nuanced point, so make sure you’re tracking with me. Pharisees had good intentions with what they did, but they took it to a sinful place. Let me explain. You see, the Pharisees tried to make the Law of Moses very applicable to the lives of people—that’s what they were doing when they were interpreting and explaining what the Law meant. The problem was when their interpretation, explanation, and application became equal to the Scripture itself.

Here’s an example: God gave us the Sabbath as a day of rest and reflection. In Exodus 20, as a part of the Ten Commandments, God gives this command: “Remember to observe the Sabbath day by keeping it holy.” Then God goes on to explain it: “You have six days each week for your ordinary work, but the seventh day is a Sabbath day of rest dedicated to the Lord your God. On that day no one in your household may do any work.” The command is: “Remember to observe the Sabbath” and the God-given explanation is “rest” and don’t work.

The Pharisees—in an effort to explain further how to keep this command—made secondary commands that further defined what was work on the Sabbath and what wasn’t. For instance, under the Pharisees’ added law, you could walk two thirds of a mile on the Sabbath, but no further—because any further is work. You couldn’t look into a mirror—because that was considered work. If the fire went out in your home, you could not relight it—because that is work. But, you could hire a non-Jewish person to do it, because they weren’t under the Law. It’s these additions that the Pharisees made equal to the Law God himself gave—that is where they went off the rails.

You see, if they had only listened to God’s Word in Deuteronomy 4:2, they could have avoided all of this. God said, “Do not add to or subtract from these commands I am giving you. Just obey the commands of the Lord your God that I am giving you.” Following God’s commands is good. Adding extra rules and forcing everyone else to follow them as if they were also from God is bad.

This is where Jesus had a problem with them—and where they had a problem with Jesus. Jesus kept the Laws of Moses, but He not their extra laws. This was “no bueno” to the Pharisees. That’s why they sought to marginalize Jesus and eventually killed him. They had the popular support of the people and were defining what it meant to be Jewish and to please God—Jesus was shattering all of that.

Here’s just one thing that Jesus said about the Pharisees as recorded by Matthew: “What sorrow awaits you teachers of religious law and you Pharisees. Hypocrites! For you are careful to tithe even the tiniest income from your herb gardens,” (You give 10% of the mint, dill, and cumin you grow.) “but you ignore the more important aspects of the law—justice, mercy, and faith. You should tithe, yes, but do not neglect the more important things.” (You are adding details but ignoring the bigger aspects of the Law—the Law is given so your relationships with both God and people can be right and whole, but your added laws are destroying both)

Jesus called them “Blind guides!” which basically meant you’re spiritual leaders, but you can’t see all the wrong you are doing Then he says) “You strain your water so you won’t accidentally swallow a gnat, but you swallow a camel! You see, both gnats and camels were unclean and therefore could not be eaten by a Jewish person. Jesus—in a pretty funny way—is saying “You go through all the trouble of straining your water so you don’t accidentally swallow a tiny bug, but your legalism is the equivalent of swallowing a camel whole.” Jesus is giving an absurd illustration to point out their absurdity.

Now let’s talk about the Pharisees and politics. The time between the Old and New Testaments, through the life of Jesus, and to 70 AD was a time of divisive politics in Jerusalem and the surrounding areas. Though Pharisees were primarily a religious group, they held political power and even served in governing bodies like the Sanhedrin.

Think of it like the Supreme Court of the United States. On this court, the Pharisees had a minority position (they couldn’t win via voting), but their sway with the general Jewish population meant that the Sadducees often had to acquiesce to Pharisee ideas in this court. Generally speaking, they tried to stay out of Roman versus Jewish politics, but there was a significant percentage of Pharisees who were anti-Roman government and therefore despised government officials including tax collectors. Pharisees definitely favored Jewish culture and thought and were only slightly politically involved.

Also, not all Pharisees were anti-Jesus:

Nicodemus: Both a leading Pharisee and a disciple of Jesus. We see him first approach Jesus in secret in John 3. In John 7, he defends Jesus in the Sanhedrin.

Joseph of Arimathea:  In John 19, we see that he and Nicodemus buried the body of Jesus.

Many other Pharisees: Acts 15:5 says they believed Jesus was the Messiah and that many of these Jesus-following Pharisees tried to force Jewish customs onto new, non-Jewish (Gentile) believers as a prerequisite to salvation. Paul, though he was a former Pharisee himself, vehemently objected to this group’s insistence on Judaizing new believers in Christ who were not formerly Jewish.

Of all the groups listed above, the Pharisees have had the greatest impact on today. They were the group that navigated the Jewish faith in the post-Temple period (70 AD to today) and many parts of Judaism today reflect their influence.

Based on what we know about Pharisees, here is a brief application to our lives, but first let’s talk about legalism or forcing others to apply God’s commands the same way you do. You see, the Pharisees had the liberty of defining for themselves as individuals what it meant to work on the Sabbath. What was overstepping into legalism was making their application of this law a law itself.

Here’s an example from the life of Jesus: “One Sabbath day as Jesus was walking through some grain fields, his disciples began breaking off heads of grain to eat. But the Pharisees said to Jesus, ‘Look, why are they breaking the law by harvesting grain on the Sabbath?'”

What the disciples had done violated the added rules of the Pharisees but not the Sabbath command itself. Here’s how Jesus responded: “The Sabbath was made to meet the needs of people, and not people to meet the requirements of the Sabbath.” Jesus is telling them that their application of this law was defeating its very purpose—it was more work not to work on the Sabbath (according to their rules) than it was to work. What God meant for rest and reflection, they had turned into a day of rules and regulations.

Romans 14 gives us the clearest picture of “Christian liberty.” This means Jesus-followers are free to do things that are not forbidden in the Bible. In this same chapter, though, Paul reminds us that we shouldn’t use this freedom in a way that makes believers who are younger in the faith stumble. Our freedom shouldn’t cause others to violate their conscience. But on the flip-side, Christian liberty also tells us that we shouldn’t apply our application of God’s law to other people.

Here’s Paul in his own words: “Don’t tear apart the work of God over what you eat.” (food being the main example Paul uses in this chapter). “Remember, all foods are acceptable, but it is wrong to eat something if it makes another person stumble. It is better not to eat meat or drink wine or do anything else if it might cause another believer to stumble. You may believe there’s nothing wrong with what you are doing, but keep it between yourself and God. Blessed are those who don’t feel guilty for doing something they have decided is right. But if you have doubts about whether or not you should eat something, you are sinning if you go ahead and do it. For you are not following your convictions. If you do anything you believe is not right, you are sinning.”

I highly recommend reading Romans 14—it is so important to know and live. Bottom line: flee from legalism and follow God’s commands.

Before we go, I want to remind you that Lifeword has a huge catalogue of Christian programming that will keep you encouraged and strengthen your faith. Times are uncertain, so if you want to listen and watch content that is biblically sound, head over to Lifeword.org—they’ve got it for days!

Copyright © 2021 by Stephen Castleberry @https://www.youtube.com/watch?v=aQFzcNr6Pww. No part of this article may be reproduced or reprinted without permission in writing from Lifeword.org.