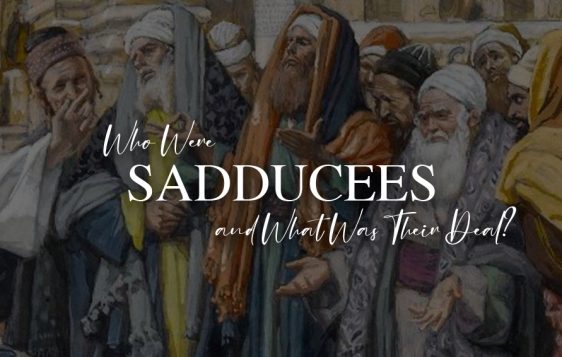 Welcome to another episode of Bible Tidbits powered by Lifeword. This is a series about the six groups that formed between the Old and New Testaments—five of which are mentioned in the Gospels and Acts:

The Sadducees were much smaller in number than the Pharisees. They were very wealthy, wielded considerable political power, and represented not just the class of priests but the high priests, as they were in charge of the Temple in Jerusalem and its services. Many believe the name Sadducee comes from the Hebrew word that means “to be righteous” or “sadaq”. Ancient historian Josephus makes special notes in his writings that the Sadducees were power-hungry, arrogant, and rude to common people. Not nice guys.

The Sadducees in many ways were the opposite of Pharisees—that’s probably why the writers of the four Gospels – Matthew, Mark, Luke, and John – note them fighting each other so often. Unlike the Pharisees, they rejected all of the Old Testament as Scripture except for the first five books: Genesis, Exodus, Leviticus, Numbers, and Deuteronomy.

They were what we would call “deists” today—they believed that God was inactive in history and didn’t care about people or any other part of His creation. They didn’t believe in angels or demons, they rejected the resurrection of the dead, and didn’t believe in an afterlife. To complete their rejection of everything Pharisee, they also rejected the oral law—extra laws added to the law of Moses by Pharisees

As mentioned before, the Sadducees wielded considerable political power since they were not only wealthy but also controlled many high offices in Judaism. The Sadducees worked overtime to keep peace with the Roman Empire in Jerusalem. Honestly, they didn’t care who was in power as long as they were close to that power. This group leaned heavily into Greek ideas and culture (That’s why they rejected so many theological beliefs that are taught in Scripture.) They were trying to be like those in power.

Why did they do this? Well first, peace is a good thing, but further than that, life was good for them—they were rich and had power—so they certainly didn’t want anything to upset their position. This was the reason they were anti Jesus. Honestly, they didn’t care too much about Him either way at first—Jesus wasn’t on their radar. It wasn’t until Jesus’ following grew large and many began seeing Him as the Messiah that they grew concerned and joined in the plot to discredit and eventually kill Jesus.

If you remember from the Gospels, Jesus is put through a show trial before ultimately being killed by Rome. The sham trial was hosted by the “Jewish supreme court” which was called the Sanhedrin. Though there were meetings of elders dating back to the founding of Israel based on a command in Numbers 11:16, this high court was actually formed between the Old and New Testaments in the Intertestamental Period. The word Sanhedrin isn’t even Hebrew—it’s Greek for “assembly.”

To further make you scratch your head, the command in Numbers 11:16 calls for a seventy-person counsel—the Sanhedrin had seventy-two. Your guess is as good as mine. The Sanhedrin met every day in the Temple except for Sabbath days and during holy festivals. The Sadducees had the majority of seats in the Sanhedrin and even controlled the person who presided over the court – the high priest.

The reason I pointed out earlier that Jesus’ trial was just for show  was that even though they tried and convicted Him, they couldn’t sentence Him. They didn’t have the power of death; only the Romans did. I tell you this to illustrate that yes, the Sanhedrin had power, but only the power given to it by the Roman Empire. Now do you see why the Sadducees were so keen on keeping the Romans happy? Both the Sanhedrin and the Sadducees came to an end in 70 AD when the Romans sacked Jerusalem and destroyed the Temple.

The Sadducees definitely leaned toward culture and thought  – secularism – and were very politically involved. Unlike the Pharisees, the Sadducees’ impact is negligible on modern Judaism.

Obviously, we can apply to our own lives what we know about the Sadducees. First of all, let’s talk about the love of money. When Jesus angrily overturned tables in the Temple, he was doing so because of the Sadducees. You see, there was money to be made at the Temple—and they were experts at it. Some of most lavish and opulent houses found by archeologists in Jerusalem belonged to Sadducees. The didn’t think God cared about Temple sacrifices. They thought God was an absentee landlord.

So why did they oversee the Temple? Money. They loved money. They wanted to make money off of true believers who were coming to the Temple. That’s why Jesus lost it and trashed the place. Jesus said to them, “The Scriptures declare, ‘My Temple will be called a house of prayer,’ but you have turned it into a den of thieves!” They were ripping people off and the “house of prayer” references the fact that God DOES care about our lives and wants to hear from us. But Sadducees didn’t pray, because they didn’t think God was listening.

Scripture never condemns money; he condemns the LOVE of money. We need money to live and to do the things God has called us to do. The problem isn’t wealth or riches but our hearts. What is it that we are truly chasing—God or money? If you go back to Matthew six and look at the Sermon on the Mount, Jesus’ teaching on money directly connects to God caring. Why? Because when we don’t think God cares, we idolize money—it’s our go-to for purpose and security. When we have God in His proper place and money in its proper place, we see that God is the only thing that gives us true security and that money is just a tool God entrusts to us.

Bottom line: God is a much better master than money—love God, not money.

Lifeword has a huge catalogue of Christian programming that will keep you encouraged and strengthen your faith. Times are uncertain, so if you want to listen and watch content that is biblically sound, head over to Lifeword.org—they’ve got it for days!