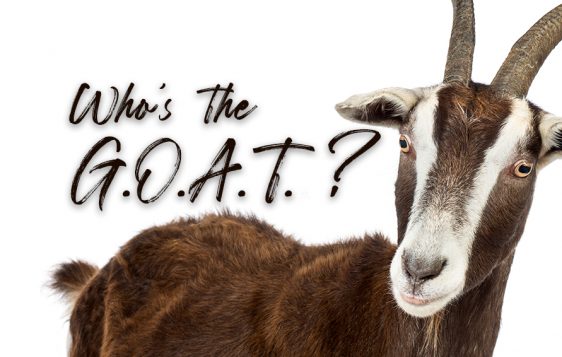 Who would you say is the greatest person who ever lived? Would you mention a national hero like George Washington or Abraham Lincoln? Would you say a great inventor like Thomas Edison or Benjamin Franklin?

Perhaps you would suggest someone who lived sacrificially like Mother Theresa or Martin Luther King. Maybe you’d think of a great leader like Alexander the Great or Winston Churchill. Some would even argue the greatest person ever is the one with prodigious musical talent like Beethoven or the most extraordinary artist like Leonardo da Vinci.

Jesus actually tells us who the greatest person who ever lived is. And I don’t believe for a second Jesus was making some hyped-up-exaggerated-over-inflated statement.

“I tell you, among those born of women there is no one greater than John; yet the one who is least in the kingdom of God is greater than he.” (Luke 7:28)

Did you catch that! Jesus said, “there is no one greater than John!”

He was referring to John the baptizer. You know the odd guy who lived in the wilderness, ate locusts, paved the way for the Messiah, was thrown in jail, doubted Jesus was the Messiah,  , and was murdered by decapitation.

I don’t think Jesus was trying to start a “who is the greatest” debate. I think Jesus was doing what Jesus always does. Communicating a life-changing reality that runs contrary to everyday, common beliefs.

I see three life-changing realities based on Jesus’ bold statement.

#1 True greatness is not what you gain, it’s what you give.

John never held a title. He had no direct reports. The few who were bold enough to follow him were redirected to follow Jesus by John himself. John amassed zero retirement savings, never made managing partner, and never had a viral YouTube video.

John didn’t even claim to be a prophet. He is self-described as a “voice calling in the wilderness, ‘Make straight the way for the Lord’” (John 1:23).

If worship is what we give God, then John was a devout worshiper! He gave his life in sacrificial service paving the way so others could see Jesus.

#2 True greatness is measured by how well you point others to Jesus.

John said over and over, “I am not the Messiah.” When others began to wonder if he was, he would quickly remind them, “It is he who comes after me, the thong of whose sandal I am not worthy to untie” John 1:27.

John consistently, faithfully, and repeatedly pointed others to Jesus.

If you point one, single person to Jesus, you have participated in the greatest work one could ever be involved in.

John had no ambition to step in front of Jesus or steal the spotlight. He was careful to shine the light on Jesus and call people to follow Jesus through repentance and baptism.

When others look at you, who do they see? Are we pointing others to Jesus? Or are we trying to impress others with our greatness?

#3 The greatest on earth don’t even compare to the least in heaven.

Let’s say you’re named by People magazine as The Greatest Human Ever!

Congratulations! Here’s your award you can hang on the wall to collect dust for the next decade.

Jesus is gently reminding us that our focus should not be constructing earthly greatness. We should pursue things that are eternal and have a lasting impact. Because the awards we receive in heaven won’t collect dust and fade away. These awards become offerings of worship we present at the feet of Jesus (See Revelation 4:10-11 and 1 Corinthians 3:14).

Go ahead and pursue greatness. Just remember the words of Jesus:

“For what does it profit a man to gain the whole world, and forfeit his soul?” (Mark 8:36)

Copyright © 2021 by Andy Comer @ https://antiochgt.com/blog/how-did-jesus-define-greatness/. No part of this article may be reproduced or reprinted without permission in writing from Lifeword.org.