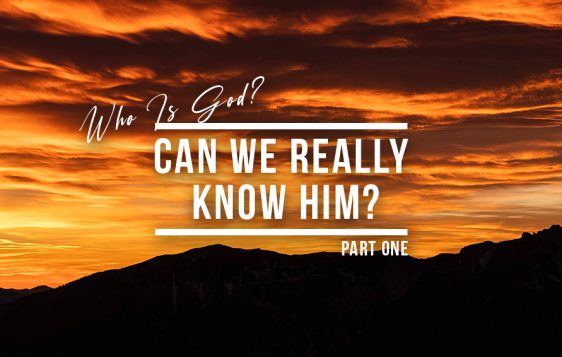 Who is God? What is he like? Is he even knowable? And if so, why should we want to know him?

These are all important questions to ask and each deserves a fair consideration. In this series of articles we will look at these questions and more, but for now we will only deal with one:

The problem with this agnostic view is that God has willed to make himself known. It may be difficult, improbable, or even impossible to know a God who did not desire to be known. But God does desire to be known and he decrees to make it so. How do we know this? Because he reveals himself to us.

Contrary to the deistic view of God, he did not set up the world, send it off spinning on its own, and then remove himself from it. He did not leave its inhabitants wandering around wondering how things came to be or who put them into existence. Although he is far above us, he chooses to be near and actively involved in his creation. He delights to reveal himself to us, and he reveals himself to us in two ways: generally and specifically.

The first way God reveals himself to us is through his creation. We call this general revelation. When God created the world and the whole host of heaven, he left his mark. His signature is in every brushstroke of sunset, every crevice of canyon, every rapid of river. Every star, cloud, planet, nebula, and galaxy is a preacher in the pulpit of the sky. As the psalmist exclaims, “The heavens declare the glory of God, and the sky above proclaims his handiwork. Day to day pours out speech, and night to night reveals knowledge” (Psalm 19:1-2). All of creation speaks of its Creator and tells us things about his essence.

Similarly, Romans 1:18-20 says that all mankind can know God exists because he has made it obvious to us. His “invisible attributes, namely, his eternal power and divine nature, have been clearly perceived ever since the creation of the world in the things that have been made.” So none of us have an excuse not to know God exists. Even some of his attributes (or characteristics) can be plainly seen in nature. It doesn’t take a doctorate in theology to see the Creator’s majesty in the mighty mountains, his divinity in the sparkling night sky, his eternality and power in the immense oceans, or his complexity and intelligence in the design of the human eye.

Another part of God’s creation that attests to his knowability is the existence of people. We can observe ourselves and those around us and make some generalizations. People can think and reason, they can learn, they can love, they can display creativity, they can show kindness. The Bible says that God created humans in his image (Genesis 1:26-27). Even people who do not know God’s Word can see a picture of a very specific Creator in their fellow human beings.

Furthermore, we can generally know God exists through our consciences. The apostle Paul writes to first century Roman Christians that even those people who do not have the written Word of God know something of his law. God’s law is “written on their hearts,” shown by the fact that they have a moral compass, or a basic understanding of right and wrong (Romans 2:14-16). If there were no God, then there would be no standard by which we could know good and bad. Without the presence of good, there can be no bad.

God has also chosen to reveal himself to us by another means, his written Word. We call this special revelation. Compiled in sixty-six books by over forty human authors who were divinely inspired by God to write down his exact words over a timespan of about 1500 years, God has revealed everything we need to know him—not everything there is to know about him, but everything we need to know who he is, what he is like, and how we can have a personal relationship with him.

The entire Bible tells us information about God, but he has only ordained one specific way to know him fully and personally—through his Son, Jesus Christ. Although God chose many human authors to be his spokesmen, he most fully spoke through his Son. “Long ago, at many times and in many ways, God spoke to our fathers by the prophets, but in these last days he has spoken to us by his Son, whom he appointed the heir of all things, through whom also he created the world” (Hebrews 1:1-2). In fact, the Bible says that Jesus is literally the Word of God come to earth in human flesh (John 1;1, 14).

The apostle John goes on to say that Christ is the one who makes the Father known to us, or literally in the original Greek, exegetes him to us (John 1:18). To exegete means to interpret, expound, or draw out the meaning of something to make it plain. Jesus makes the Father plain to us.

Seeing Jesus means seeing God. Jesus answers his doubting disciple, “If you had known me, you would have known my Father also. From now on you do know him and have seen him” (John 14:7). And when Philip asks him to show them the Father, Jesus replies, “Whoever has seen me has seen the Father” (John 14:9).

Jesus is the image of the invisible God and the exact imprint of his nature (Colossians 1:15; Hebrews 1:3). He came to earth “so that we may know him who is true” (1 John 5:20a). Through knowing Christ, we can experience what God the Father is like and truly know him.

God is very knowable. In fact, everyone will know him someday. If you do not know him now as Savior and Lord, you will know him after your last breath as Judge. The Bible says that at the end of every person’s life, they will stand before God and give an account for every deed they have done, every careless word spoken, and every secret thought. If you did not acknowledge God in this life, you will acknowledge him then “for it is written, ‘As I live, says the Lord, every knee shall bow to me, and every tongue shall confess to God’” (Romans 14:11). Some will bow in loving adoration of his awesomeness and in gratitude for the grace he lavished on them in saving them from their sins. Others will bow in fear and dread at his awesome wrath relinquished on them for their unrepentant and unpaid sins. But before that final moment arrives, it is not too late to heed the words of the prophet:

“Seek the LORD while he may be found;

call upon him while he is near;

let the wicked forsake his way,

and the unrighteous man his thoughts;

let him return to the LORD, that he may have compassion on him,

and to our God, for he will abundantly pardon.”

Since God is knowable, seek him now before it is too late. His Word implores you to draw near to him and promises he will draw near to you in return (James 4:8).