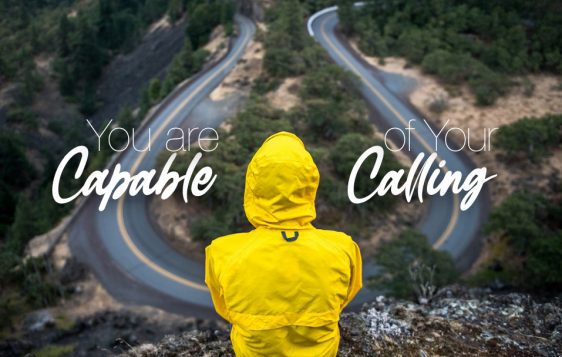 Have you ever been called on to do something that you knew without a doubt you weren’t capable of doing? Well, that’s exactly what happened to me fifteen years ago!

Although I had been at the Baptist Trumpet (the weekly religious newspaper of the Baptist Missionary Association of Arkansas) for over 25 years and was serving as assistant editor, I never even dreamed about being the editor/boss. But that was exactly what I felt like I was being called to do.

I struggled with the idea for almost a year and had some long (and short) conversations with God about it. Those “conversations” mostly consisted of me telling God why I “couldn’t possibly” be the editor and him answering back. (In my head of course, not audibly, and in words that I could best understand.)

My first reason was simply that the editor had always been a man and a preacher — and I was neither one! God’s answer? “I know; I pretty much made you!” He convicted me that he was indeed calling me and that it was something a woman like me could do. After all, they wouldn’t want an editor of “few words,” and I certainly had a lot of words and used them with great regularity.

So I went to the second reason: I only had a high school education and had never even taken a journalism course. God’s answer: “Do you want to do it, or do you want me to do it?”

When I answered, “That would be you if it’s going to be done at all.”

God’ response was, “Then I could get a monkey to do it!”

To which I responded, “If you get me, you’ll have one!”

Well, I came up with a few other flimsy excuses, but the bottom line is that God won. I applied for the position still thinking I’d never be chosen for the job; but sure enough, I was, and I have been serving in this position since then. Of course, I’ve made some mistakes, but I hope I have finished well overall.

I will retire next month, which has caused me to reflect on some lessons I’ve learned along the way and the Bible verses that go along with those lessons:

• Those God calls, he equips. No general would send his soldiers into battle without the proper equipment, and neither would God, our Commander-in-Chief! If God has asked you to do something, you might not have everything you need to do the job right then, but he will make sure you have what you need when you need it.

“He will equip you with everything good that you may do his will” (Hebrews 13:21).

• Don’t sell yourself short. You are capable of a lot more than you give yourself credit for, so tap into your hidden strengths and trust in yourself. If your friend had the same talents and expertise you have, would you think they could handle the job you’re about to tackle? Probably so, right? Then why can’t you? After all, you’re the one who has been called to do the job!

• Be willing to get more training if needed. Just because you’ve never done it before doesn’t mean you can’t do it. If it means taking an online course, a correspondence course, or just reading and studying at home on your own — go for it! The only person who can’t learn something new is in the cemetery.

• To achieve a goal, just keep doing the next thing. Sometimes we short-circuit ourselves by looking too far down the road. We’ve all heard that every journey begins with the first step, and it continues with each step we take toward our desired destination. The secret is to just keep on keeping on, no matter what the obstacle is.

• Don’t be discouraged if you take two steps forward and one step back. That will happen sometimes, so don’t be surprised when it does. Just remember that even then you’ll still be one step forward. Being knocked down isn’t the end — staying down is!

• Give it your best shot! No matter what you do, do it full out with nothing held back. If one way you try doesn’t work, try another way! Never retreat from a problem; just do what the Marines do — “back up and regroup!”

“Whatever your hand finds to do, do it with all your might” (Ecclesiastes 9:10).

• Don’t think you have to do it alone. Surround yourself with supportive and truthful people who aren’t afraid to “tell it like it is.” If you’re in a supervisory position, hire people who are smarter than you and don’t be intimidated by that fact. The old adage of “iron sharpens iron” is true — nothing gets sharper by rubbing against a marshmallow!

And most important of all, remember that you are never alone if you’re a child of God. He will be your best cheerleader and coach at the same time. God believes in you, so believe in yourself and remember his promise — “I will never leave you or forsake you” (Hebrews 13:5).

Could I do this job? Absolutely not! But could God do it through me? He could and he did!

Copyright © 2020 Lifeword.org by Diane Spriggs. All rights reserved. No part of this article may be reproduced or reprinted without permission in writing from Lifeword.org