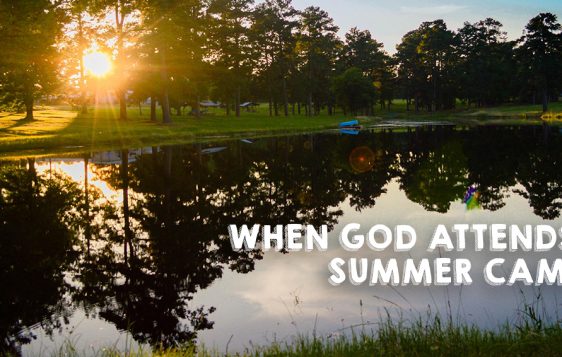 There are many ways that God uses forty-plus acres in east Texas as a place for groups to come for summer camps and retreats. If a true number could be tallied of the lives God has changed through Daniel Springs Camp during its fifty-five years of ministry, it would be an incredible number. This camp continues to be a place where God speaks to groups and individuals in ways we do not give him the chance to in everyday life. Here are three of those life-changing stories:

#1 A mother who attended camp with her son and their church’s youth tells how God spoke to an entire family during a week at camp.

You guys have absolutely no idea how much you and the camp have affected our lives. My husband and I have been almost drowning. The Bible study lessons this week I think were sent for my family. We knew our son had been dealing with something, but he wouldn’t share it, and this week he finally stepped out and stepped up into the ministry. You have no idea what that means. I have been praying for years for that he would find his calling. Turned out, it found him.

One of your young men (a camp counselor) was a huge influence on him and helped in ways we never could. My son has autism. His whole life, through all of the breakdowns, therapies and battles, I always said God is going to use him to do something great.

The kids at our church are not wealthy and most and are in foster care or live with aunts, uncles and grandparents, so they are not the popular kids. But another one of the staff took time this week and made my kids feel like they were special, like they were his kids, and that had such a big impact on them.

I could sit here all night and tell you of the amazing work your staff did for my kids (at our church). I consider them mine and I love them all dearly no matter what they do. We have to love them, because no one else does. So again, thanks.

#2 Another great example of God still moving and reinforcing how he wants to use us was shared by Lizzie, one of our camp counselors. This is her story of how God spoke through a little child.

I was standing there talking to some adults and kids when this kid out of my Bible study group comes up to me with this huge smile. He told me the exciting story of how he had accepted Christ tonight. He shared how he loved Bible study and the message tonight and how God had moved in his life. He then got a serious look on his face and asked if I was going to be at the camp the next year so that I could teach his Bible study group.

With tears in her eyes as she told us the story, you could tell she did not have an answer to that kid’s question. In a loving way we gave her a hard time but also knew that for her to come back for a second season would be a true God thing. That summer was an amazing one with strong relationships built among staff members.

In March of the following year, Lizzie called me and the conversation began with small talk, then she said, “I wanted you to hear it from me.” Sadly, she told me, she would not be able to return to work at camp.

Summer staff positions were filling up, but several staffers had mission trips scheduled during the same three weeks, leaving us with fewer camp counselors during those weeks. But in late April Lizzie called and asked if all of our summer staff positions had been filled. She explained that she had commitments for most of her summer, but she had three weeks open if we need the help . . .

You can just about guess which three weeks she would be able to work. Yep! The three weeks that staffers would be gone for mission trips.

I am tired of not following the Lord. I am already planning on being back in 2017 unless he closes the door. I have grown so much being around the staff, learning from the campers and knowing that the Father in heaven loves me so much that he wants to be a part of my life every day. Being here reminds me of that.

#3 Finally, this is truly an amazing story of a life changed at camp: Daniel had all the right answers when it came to his faith. During his interview he had told us his salvation story,  and we were excited about him coming to work and being used to impact peoples’ lives.

But after an evening service he came up to me and said, “I walked the aisle many years ago, but what I did was not real. I need to accept Christ with all I am and make it real so that my decision is to make Jesus Lord of my life.”

We talked and prayed right there in the starry sky of East Texas in front of the doors of the tabernacle. That young man made it real in his life, not just in his head, that he had accepted Christ as his Savior. What an amazing testimony where fear could have kept this young man from coming forward. He knows now that he is a child of the King.

Copyright © 2021 by Jason Prewitt @ http://danielspringscamp.com. No part of this article may be reproduced or reprinted without permission in writing from Lifeword.org.