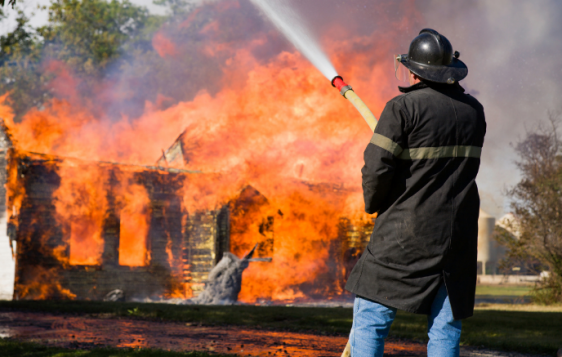 There’s a house ablaze. Inside is a family of four, trapped, with no way out. They need help getting out of the house before they perish. Time is running out. An engine from the local fire department shows up. Out jumps a crew of able-bodied, trained, and ready-to-go firemen. They gear up, drag out a hose line, and stand in amazement watching as the house burns, commenting that someone should really rescue that family inside. These “wanna be” firemen talk about rescuing the people inside . . . but real love does.

There’s a homeless man living on the streets. Everyone seems to have the answer to why he’s there: drugs, alcohol, laziness, or maybe he’s not really homeless but just making a buck off people’s compassion. But no one on this earth truly knows his story except him. Day after day, hundreds of people walk by, passing him off as a fraud. A few people talk about how sad it is, and how much they should help him in some way . . . but real love does.

There’s a child in Haiti who is all alone. Her parents were either killed or fled after an earthquake that demolished everything she’s ever known as home. She now lives in one of many “tent cities” still spread across the country not too far out off the coast of the USA. She doesn’t go to school because she must scavenge for food and clean water to survive. Many folks hear her story and feel sorry for her, saying we should give to Haitian relief funds . . . but real love does.

The difference between saying and doing? Well, that’s obvious in these scenarios. People like to talk about helping the destitute and broken, but real love actually does.

The problem began at the beginning of it all. God gave one simple rule to the first two humans: Eat everything in the garden except that tree. But they gave into to temptation, disobeyed, and since that moment we’ve all known this thing called sin personally. That issue of sin held us captive and sentenced us to eternal separation from God after this life ends.

He didn’t just talk about doing what it took to deal with that sin issue.

He willingly laid down His life to offer us forgiveness of that sin we so desperately needed.

Anyone can talk about making a sacrifice to help and heal people . . . but real love does.

Jesus paid it all for us by giving Himself. You can know Him by asking for the forgiveness of your sins through what He did on the cross. Would you consider this decision for yourself today?
Jesus showed us what it means to go beyond simple talk. Anyone can talk about doing his or her part to help others and change the world . . . but real love does.

That’s just a thought, and I welcome yours.
Blake

Copyright © 2022 by Blake Martin @https://pastorblakeman.wordpress.com/2011/02/25/real-love-does/ No part of this article may be reproduced or reprinted without permission in writing from Lifeword.org.