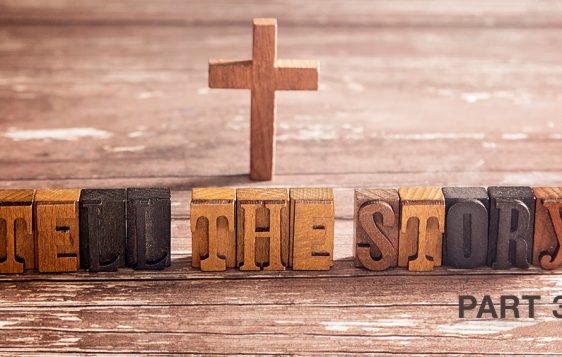 Your testimony, what God has done for you, is your salvation story. In a courtroom trial there would be an eyewitness called to the stand then the bailiff would ask the one testifying to lay a hand on the Bible and ask, “Do you swear to tell the truth, the whole truth, and nothing but the truth, so help you God.” The judge would then turn to the witness on the stand to give an account of what happened – a testimony.

Spiritually speaking, we’re talking about our own story of salvation. This is an account of the time when Jesus saved you. You committed your life to him. No one’s story will be the same.

Some of you were saved at a young age.

Some when you were older.

Maybe you gave your life to the Lord at a revival or church camp.

Maybe it was right beside your bed one night.

You might have surrendered to God’s calling while driving down the road.

Or at a youth conference.

Maybe it was at your grandmother’s house on her porch swing.

It could have been during a horrible time in your life when you cried out to the Lord in desperation.

That’s what all Christians have in common:  We’re different, but we all have a story to tell, a testimony of being redeemed.  But does your testimony really tell the story of what Jesus did in our life? Does it truly speak to the things that Jesus has done in your life? We are a living testimony, a witness for Jesus. We have an eyewitness account of what happened to us.

In Acts 1:8 Jesus has just given the Great Commission at the end of Matthew and told his disciples to “Go”. The Book of Acts is about taking action, going and telling the greatest story ever told by taking action on what Jesus told them to do: “but you shall receive power, after that, the Holy Ghost is come upon you, and you shall be witnesses unto me, both in Jerusalem and all Judea and in Samaria and then to the uttermost parts of the earth.”

Jesus said to “be a witness” in three places beginning with the area closest to them: Jerusalem, Judea, and Samaria. Then he says to go “into the uttermost parts of the world.”  No matter where you are, that’s where you should tell your story.

Think about this: Who is the closest to you? Your kids, your husband, your mother-in-law; begin with them. That inner circle is the people closest to you. We should share our story with them, then go a little bit further.

Who do you see on a daily basis?  Maybe they’re not your family and don’t live in the same house, but what about a co-worker or maybe the coffee shop worker you see every morning? We see the vet all the time because we have lots of dogs, so it’s people who are in this other circle, just a bit further out from our inner circle, but we see them all the time and we come in contact with them

Then who is in this far circle? These are people we know as acquaintances but are not super close to us. Jesus is saying to start here and then go further out; it’s a ripple effect. It’s like when someone does a cannon ball into the pool and  the biggest impact happens where your body hits  then ripples outward from there. Same thing with us . . .

Jesus says we’re supposed to start where we are but everywhere we go, we tell our story and give our testimony. Just as Jesus called out twelve ordinary men to follow him, become his disciples and share his name across the world, he has called you and me to do the same.

Isaiah 12:4 says, “And in that day shall you say, ‘Praise the Lord.’ Call upon his name and declare his doings among the people making mention that his name is exalted.” That Scripture says we should praise the Lord and call upon his name, but what are we supposed to do with that? We’re to declare his works among the people, the things that Jesus has done for us . . . our testimony.

Isaiah says to“ make mention that his name is exalted.” Not only are we supposed to declare what Jesus has done for us, (It’s not like, “Hey, Jesus did this for me. Look how awesome I am.”), but to do so for his glory.

Matthew five is a beautiful chapter where Jesus is giving the Sermon on the Mount. Matthew 5:15, probably a familiar song, says, “Neither do men light a candle and put it under a bushel.But on a candlestick and it giveth light unto all that are in the house.” The children’s song says, paraphrasing here, “this little light of mine, I’m gonna to let it shine, not hide it under a bushel.” Jesus is saying he has given us new life. Why are we going to hide it? He’s given you the story to tell. Why would we hide that?

Instead, let that light shine for others to see so Jesus receives praise and so other people see the light. Oh, what the light reveals that we can’t see in the dark! There is darkness in our lives, then the light of Jesus drives the darkness away. People want hope, they need hope, and we shouldn’t hide that light. That’s something we should let others see.

People who were changed by God have a testimony to tell. For example, God called out Jonah to go witness to the people of Nineveh, but Jonah said, “No way. I’m not doing it,” then he ran from God. He did not want to witness to those people because, number one, they were his enemies, but also they were terrifying people. What the Ninevites did to people who worshiped God was horrible. Jonah was scared that might happen to him and selfishly did not want them to have God in their lives. God showed him that those people were just as deserving as he was. Jonah’s attitude and perspective changed and sometimes ours has to as well.

Next is Moses, who was raised in an Egyptian palace, led the Egyptians out of Egypt, and parted the Red Sea, all this after his birth mother put him in a basket that floated down the river. Thankfully, he was found by Pharaoh’s daughter, who raised him in a palace with  everything he could ever want. He gives all of that up to do what God chose him to do.

Think about all the things he had in the palace, then God called him out into the wilderness to save his people. God sent them manna from heaven but only enough to supply them for that the day. Moses’ perspective drastically changed; his desires changed. He went from palace life to nomad life. He became focused on what God wanted. Leading the Israelites was a real pain, because they complained to Moses about God all the time. But Moses had to do what was right in the Lord’s eyes and not what the people wanted.

Finally, one of the most incredible conversions in the Bible was Saul’s.. He lived by the law and did not like what was happening with the new Christian movement, so he sought to kill them. But along the road to Damascus Jesus changed him. He was blinded, both spiritually and physically, then God taught him to see and even gave him a new name, Paul, to signify this total turnaround. As we read in his letters throughout the New Testament, we see and we hear a new man.

Jonah, Moses, Saul – one hypocrite and two murderers – all wretched sinners whose stories of God’s grace and mercy have helped people come to know Christ for centuries.

God says he changes people from the inside out. The more the Holy Spirit guides us to the truth of Scripture, the more we learn about what we must change in our own lives. Our desires, thoughts, dreams, and goals do a 180 degree turn. The more we’re focused on Christ, the more he becomes our center.

I can say that for myself. I know that to be 100% true. Who I used to be is not who I am now, and it’s only because of God ‘s grace and mercy. First Peter 3:15 says, “But sanctify the Lord God in your hearts and be ready always to give an answer to every man that asks you a reason of the hope that is in you with meekness and fear.” Always be ready to give an answer to those who ask why you have hope.

You’re different. People want to know what’s so different about you. We have to be ready to tell them why and share the gospel. But sometimes we think we’re not ready because we don’t know the words to say. What if I say the wrong thing? The Holy Spirit leads us. We 100% believe that the Holy Spirit lives inside of us. If we’re a believer, then that’s the case. If he lives inside of us, then why are we scared to share the truth? Why are we scared to share what Jesus has done?

One of the reasons is that we’re afraid of what people think about us. We’re scared because they might know who we used to be and won’t believe us or maybe they’ll bring up our past. Regardless, our testimony is important.

Sharing our testimony with those closest to us is the most difficult because they know us best, the good, the bad and the ugly. But we have to share it. That’s what God’s called us to do so. Do you feel prepared to give an answer for the hope that is within you? That hope is your salvation in Jesus Christ. That’s your testimony. Does your testimony, declare the great things that the Lord has done for you? Is it centered on his work or yours?

Nothing I have ever done could produce enough righteous to “deserve” salvation, only the work of Jesus Christ in my life. No one could turn a sinner like me into who I am today except for Jesus.

I was a broken and desperate girl seeking attention and finding it in the wrong places.

I was a wretched and filthy sinner and Jesus reached down and he washed me clean.

Only Jesus can do that; he changed my heart, my eternal destiny, and the old things passed away.

Just like a caterpillar goes through this change and becomes a beautiful butterfly: They look nothing like what they were before. And that’s what we are in Christ, a beautiful picture of salvation. Isn’t that what we want people to know? We’ve been changed. We can testify to the change that’s taken place in us and it wasn’t us at all, but it was Jesus who did it. Is that really what we’re doing? Are we trying to tell everybody all about Jesus saving our souls?

We have a voice, whether that’s with our family, our co-workers, our social media. Wherever it may be, we have a voice. Wherever the Lord is leading you this week, we have the best story to tell.Are you doing it in a way that people know our life change had nothing to do with us . . . something we accomplished . . . and everything to do with what Jesus did on the cross? Who I am today is not who I used to be because of him, so don’t keep that incredible story to yourself.