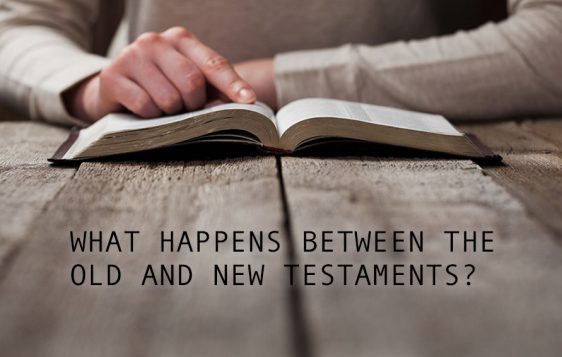 Prophecy in the Book of Daniel

So you’re reading through the Bible. You finish Malachi (the last book of the Old Testament) then turn the page and begin Matthew (the first book of the New Testament)—and everything is different. What in the world went on between those two pages?!

Seriously, if you’ve ever read straight through the Bible, you’ve probably had questions about why things are so different between the last page of the Old Testament and the first page of the New Testament. At the end of the Old Testament, the Jewish people are returning to Israel under the rule of the Persian Empire and rebuilding everything from the ground up after war and exile destroyed them.

But when the New Testament opens, the Jewish people are living under rule of the Roman Empire and enjoying the metropolis of Jerusalem and all the amenities it offers. People like the Pharisees, the Sadducees, and the Herods don’t exist in the Old Testament but are firmly established in power in the New Testament. Why does everything seem so different in ONE PAGE? Why doesn’t the Bible mention these changes at all?

For example . . . what was happening four hundred years from today? The Pilgrims were in the middle of the Atlantic Ocean and would not see land for another two weeks. Four hundred years is a long, long time.

This gap between the Testaments is called the Intertestamental Period by scholars but often referred to as the “silent years” because God sends no prophets between Malachi and John the Baptizer. Radio silence from God.

Nothing for generations until John the Baptizer’s message bursts on to the scene: “Repent of your sins and turn to God, for the kingdom of heaven is near” (Matthew 3:2). There are a few questions that immediately come to mind for me:

(1) Why aren’t these 400 silent years mentioned in Scripture?

(2) What happened to change so much between Malachi and Matthew?

(3) Why did Jesus choose to come when he did?

Let’s tackle the first question first—why aren’t these 400 silent years mentioned in Scripture? Well, actually they are, but you have to know where to look. God tells Daniel what will happen in incredible detail more than 100 years before the Intertestamental Period begins and 500 years before it ends.

If you’re asking what specific verses in Daniel, it’s Daniel chapters 2, 7, 8, and 11. The prophecies contained in those four chapters of Daniel all concern the five world empires that would have a direct effect on the nation of Israel—four of them are now in the past and one is still yet to come (now that Israel is a nation again—#fulfilled prophecy).

What we see in Daniel 2, 7, 8, and 11 is that God reveals more and more details to Daniel as Daniel gets older—it’s just a few pages to us, but they are unfolding over a lifetime for Daniel. The big, fancy term for this is progressive revelation.

God reveals more and more to us about who He is and what He’s doing as the Bible unfolds. We do the same thing in our lives. For instance, we progressively reveal mathematical concepts to children—we don’t start them with calculus, we start them with more basic things like addition and subtraction and work up to more advanced ideas.

Likewise, in Daniel 2, God simply lays out the five major kingdoms, but in Daniel 11, God gives Daniel specific events and details about the coming future – progressive revelation. In Daniel 2, the five empires of earth that have a direct effect on Israel are: Babylon, then Persia, then Greece, then Rome, then a future empire to arise one day in our future.

There’s a timeline between the Old and New Testaments, roughly from 400 BC to 25 AD. And it’s the tale of four empires:

#5 A future Empire that has not yet come.

Now if you’re not a history buff, don’t stop reading—my goal is to make this the most interesting history you’ve ever heard. If the word history is a boring word to you, just chop off the “hi-” and just focus on the “story” part—that’s all history is: a real story. Just because someone made real stories boring to you in the past, that doesn’t mean that other people can’t make them interesting!

Okay, let’s throw our three empires on the timeline. all three civilizations already exist at this point, but Greece and Rome aren’t unified into empires yet. Fun fact, before the Old Testament ends, before Nehemiah rebuilds the wall, and before Esther becomes Queen of Persia, the Battle of Thermopylae takes place. (If you’re not a history buff, that means the movie 300 happens.)

History From the Jewish Point of View

Part of getting into a story is putting yourself in the shoes of those living it, so let’s put ourselves in the shoes of a Jewish person living in Jerusalem as Malachi’s ministry ended and the Old Testament closed. You’re living in the city of your ancestors after a generation was exiled by the Babylonian Empire.

Commerce is returning as Nehemiah’s defensive wall was rebuilt and the worship of God in the Jewish temple has returned—life is back to normal. Not just after one year of hardship, like 2020, but after seventy years of desolation. Life is good again for your people. You have economic and religious freedom under Persian rule.

In 343, the Persians conquer Egypt—adding the Nile Delta and Libya to the empire. You don’t care, because, for you, life is good under their rule. Four years later, you begin to hear that a new empire is forming as Philip of Macedon conquers all of Greece. Unites all of Greece.

Just three years after that, Philip is assassinated and revolts break out all over Greece. His son Alexander the Great, mentored by Aristotle himself, becomes king and crushes the rebellions.

Alexander wastes no time and begins conquering new lands and warring with the Persians. They are no match for Alexander and his swift army. Asia minor falls. Judah and your city of Jerusalem falls. Egypt falls. Finally the last remnants of the Persian Empire collapses, but Alexander isn’t done—he takes parts of India before his war-weary army mutinies and demands that they return home after a decade of constant conquest.

Alexander’s rule over Jerusalem wasn’t the end of the world—but he did demand that his culture, the Greek culture, be the new way of doing things. Sure, you could still practice the Jewish religion, but you had to do it in a Greek way, speak the Greek language, and integrate Greek ideas into public life.

In 323 BC at the age of 33, Alexander the Great dies suddenly. With no heirs, his empire is carved up by his four top generals. As you can imagine, things do not go well though the fractured Greek Empire technically lasts until around 31 BC—a run of 308 years. These four guys and their decedents— especially the Ptolemies and the Seleucids—fight and fight and fight with each other. Judah is initially under the control of the Ptolemies and things were pretty good—the Old Testament is even translated into Greek.

This constant warring between the Seleucids of the north and the Ptolemics of the south leaves Judah devastated as it’s caught in the middle of this struggle. One ruler of the north, Antiochus Epiphanes, is especially bad. After failing a second attack on Egypt and being fended off by the meddling Roman navy, he returns to Jerusalem and causes immense suffering.

In 167, he desecrates the Temple by sacrificing a pig on the alter. He outlaws the Torah and all Jewish practices. Following the Jewish law of circumcision and observing the Sabbath day of rest were punished with execution.

The Great Jewish Hero Fights Back

Like has happened often in history, tyranny and atrocities were met with resistance. In 166, the Maccabean Revolt began. Judas “Tha Hammer” Maccabeus—seriously, his name was that cool—took this guerrilla revolt from sporadic resistance to a full-fledged revolution that granted them a peace deal in 165 and restored religious liberty and quasi-independence to Judah. The holiday of Hanukkah celebrates this victory. Don’t tread on “Tha Hammer”.

Eventually the Seleucids regained some control over Jerusalem but left it to largely govern itself. During this time, two camps emerged in Judah: the Hasidics and the Hellenizers. Hasidics wanted to retain historic Judaism—they were the forerunners of the Pharisees— yes, the Pharisees of the New Testament. Hellenizers, on the other hand, wanted Judaism to progress and worked to merge it with Greek thought and life—they were the forerunners of the Sadducees—yes, the Sadducees of the New Testament.

Then it Gets Bad Again

Weakened by fracturing and constant war, the Greek Empire fell piece by piece to the new kid on the block, Rome. In 63 BC (we’re getting closer and closer to Jesus’ birth) Jerusalem fell to the Romans under the ruthless leadership of Pompey. As the Romans took Egypt, a descendent of Esau—you remember Jacob and Esau from Genesis, right?— aligned himself with Julius Caesar and earned enough favor with Rome to make his son, Herod the Great —yes the Herod we see in the Christmas story—to eventually be made ruler over Judea in 37.

After the assassination of Julius Caesar in 44 BC, Octavius consolidated power throughout the Roman Empire to become the first official Roman Emperor. In 27, Octavian changed his name and title to Caesar Augustus —yes, the Caesar Augustus we see in the Christmas story. That leaves us with one piece of history left— Jesus. Jesus was born sometime around 6 BC. How do we know that? Because he was born before Herod the Great died in 4 BC.

That’s what happened between the Old and the New Testaments.

What’s Our Takeaway as Christians?

Before we get out of here, let me ask this question: What does all of this mean for us? Sure, we heard a lot of great information, but what should be our takeaway?

Even when we don’t see God working in the limelight, we can trust that God is working in the background. God wasn’t AWOL during this time, God was actively setting things up for the arrival of the Messiah—and even provided details to Daniel well before they unfolded. Galatians 4:4 says that “when the right time came, God sent his Son . . . ” God used this time to make the circumstances ideal.

I hope you learned something. For more Bible Tidbits follow the link, subscribe, and watch new videos when they drop.

Copyright © 2021 by Stephen Castleberry https://www.youtube.com/watch?v=2_70RbtRO5w. No part of this article may be reproduced or reprinted without permission in writing from Lifeword.org.