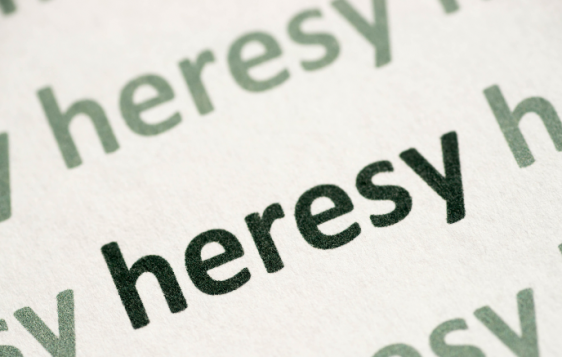 If you’ve been in Christian circles for any amount of time, you’ve probably heard the terms heresy and false doctrine thrown around. For most people, the definition of these words is fuzzy. I’ve heard things that were clearly heretical given a pass and things that were simple doctrinal differences denounced as heresy.

So what is heresy, how do we protect ourselves from it, and what should our response be to heresy the twenty-first century?

Let’s start with defining terms. Interpretation differences is the most minor category and includes issues such as pre-tribulation versus post-tribulation” or “When did the church begin?” There will be differences in this category, but they are pretty isolated to one topic.

Theological differences are bigger discussions of Scripture with wide-ranging implications for understanding God but still fall in the realm of orthodoxy.

Then there is false teaching, the first step outside of orthodox beliefs and into teaching that is contrary to Scripture. I mean adding to or subtracting from Scripture in a way that leads to beliefs that contradict “sound doctrine”.

Annihilationism, the idea that God just causes unbelievers to cease to exist after the final judgment, is a false doctrine. Hell and the lake of fire is a clear doctrine in Scripture and the path to believing in annihilationism isn’t through Scripture but through human beliefs that God wouldn’t punish someone for eternity.

The final category is heresy. False teaching is adding to or subtracting from Christianity and heretical beliefs that contradict the core tenets of Christianity in a way that destroys the faith. Heresies include denying Christ’s deity, denying the bodily resurrection of Christ, believing that there are many paths to God, etc.

So why discuss doctrine and heresy? Because it is a major issue both today and in the first century when the New Testament was written. Paul told Timothy to “Preach the Word of God. Be prepared, whether the time is favorable or not. Patiently correct, rebuke, and encourage your people with good teaching. For a time is coming when people will no longer listen to sound and wholesome teaching. They will follow their own desires and will look for teachers who will tell them whatever their itching ears want to hear. They will reject the truth and chase after myths” (2 Tim 4:2-4).

Bad teaching and false doctrine are mentioned throughout the New Testament as something to guard against:

Acts 15 is about determining the difference between sound doctrine and false doctrine.

Paul’s letters to churches have portions where he defends good teaching and puts a spotlight on what is false.

Peter talked about it: “There were also false prophets in Israel, just as there will be false teachers among you. They will cleverly teach destructive heresies and even deny the Master who bought them. In this way, they will bring sudden destruction on themselves” (2 Peter 2:1).

Jude called believers “to defend the faith that God has entrusted once for all time to his holy people.” How do we protect ourselves from heresy? It’s found in Acts 17 where Paul is in Berea as the people “searched the Scriptures day after day to see if Paul and Silas were teaching the truth.”

That’s how we protect ourselves from false doctrine and heresy—we know the Scriptures. We study the Bible. This is our one and only source of doctrine—not human reasoning, not high-sounding philosophy, not emotion-driven reflections—only Scripture. That’s why Paul wrote, “All Scripture is inspired by God and is useful to teach us what is true and to make us realize what is wrong in our lives. It corrects us when we are wrong and teaches us to do what is right.” (2 Timothy 3:16)

Guard yourself from false teaching by learning sound doctrine from the Bible—not internet forums, not Facebook, not podcasts. That’s what the Bereans did.

I hope you learned something in this video. If you did, please share it and subscribe so you can catch Bible Tidbits videos when they drop on Thursdays!