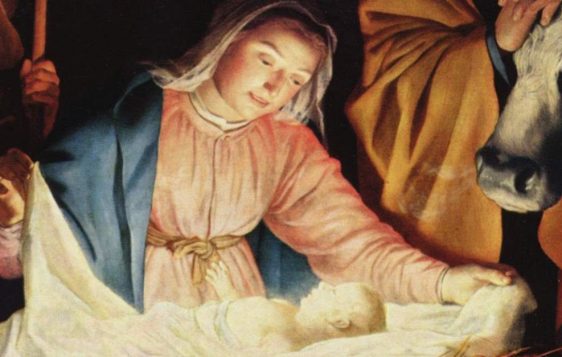 The Christmas song “Mary, Did You Know?” was written by Mark Lowery and Buddy Greene in 1991.  It quickly became a favorite of many believers.

The lyrics of the song asks if Mary, the Mother of Jesus, knew questions about who Jesus is or what he would do – like if she knew he would walk on water or deliver the world.

I personally believe Mary did not know the answer to these questions.

Even though she didn’t have all the answers, Mary still knew Jesus in a way nobody else ever has or ever will know him.

Not just as Savior but as her Son.

Not just as Almighty God but as the helpless baby she held in her arms. And although she did not understand everything about Jesus – there were several things that Mary did know.

I want to examine three things that “Mary did know” and the question then becomes yours:

“Do you know what Mary knew?”

1. No matter who you are, the Lord can use you.

Do you remember the last time you filled out a job application?

Almost all job applications ask that one all-important question: “What is it that makes you uniquely qualified for this position?”

But what your employers really want to know is your liabilities, or what would make you unsuited for the job and your assets – what skills, abilities, education and experience will help you do the job.

But God doesn’t operate this way.

Mary teaches us God is not as interested in your ability as He is in your availability. The simple truth is no matter who you are, God can use you.

The book of Luke describes an ordinary girl with some serious liabilities:

Mary was young, poor, and from Nazareth – all characteristics we might have thought would make her seem unusable by God.

But because God chose Mary to do one of the most important jobs he ever asked anyone to do – we learn that no matter who you are, the Lord can use you.

Child of God – don’t limit God. He can use anyone who wants to be used!

Mary teaches us no matter who you are – God can use you.

2. No matter what problems you face, the Lord is with you.

There are some things in life you don’t want to go through alone.

Christmas, for instance. I don’t know anyone who enjoys spending Christmas alone. I’m sure there is some idiot somewhere who likes to spend the holidays alone but most of us want to share the celebration with the people we love.

Most people don’t like to be alone when they are called upon to walk through difficult spots in life either. We need someone to talk to, to encourage us, to pray with us.

Of course, the one person we need more than anybody else when we face problems is the Lord.

Mary teaches us that no matter what problems you face, the Lord is with you.

Why did the angel tell Mary that? It was because she was afraid.

Imagine the fears she might experience as a result of her pregnancy:

How could Mary remain calm and courageous as she faced the problems her pregnancy might cause?

I personally believe Mary clung to the words the angel spoke to her, “The Lord is with you” (Luke 1:28).

The Lord would be with her.

The Lord would help her.

The Lord would give her the strength and courage to face whatever may come.

The Lord makes that same promise to you and me today.  The psalmist declared:

Whatever problems you are facing right now, whatever worries and fears are bothering you in this moment – don’t let them discourage you.

No matter what your problems, the Lord is with you.

Bring all your problems to God and trust him to work them out.  He will – just as he worked them out for Mary.

3. No matter what he promises, the Lord can do it.

The birth of Jesus Christ, hands down, is the most miraculous birth recorded in the history of the world. Even though, obviously, the birth was normal, the conception was not.

Jesus was conceived in the womb of his mother Mary, by a miraculous work of the Holy Spirit and without the aid of a human father. Now, that doesn’t sound any more normal or possible today than it did back then.

But notice Mary’s reaction when the angel Gabriel told her of the “virgin” born Son of God:

Even though the angel’s news was unbelievable – Mary believed it. Mary believed that no matter what God has promised, he can follow through.

We must admit that Jesus’ miraculous conception remains impossible to understand by human reason alone.

But why is the virgin birth important?

Mary knew a virgin birth was impossible, but she also believed that “nothing is impossible with God.”

What promises of God are you tempted to doubt right now?

It doesn’t matter how impossible God’s promises may seem – there is nothing, absolutely nothing, impossible with God.

We all need to follow the example of Mary who believed the words of the angel and replied, “I am the Lord’s servant . . . May it be to me as you have said” (Luke 1:38).

In conclusion, we really don’t know what Jesus learned from his mother. We don’t know the impact of her life on his, or how much of who he grew up to be was a reflection of the love and character of his mom.

But Mary did teach us a few things:

God follows through on his promises.

God uses anyone who is willing, regardless of his or her qualifications.

Copyright © 2019 by Jeff Swart @ http://jeffswart.com . Used with permission. No part of this article may be reproduced or reprinted without permission in writing from Lifeword.org.