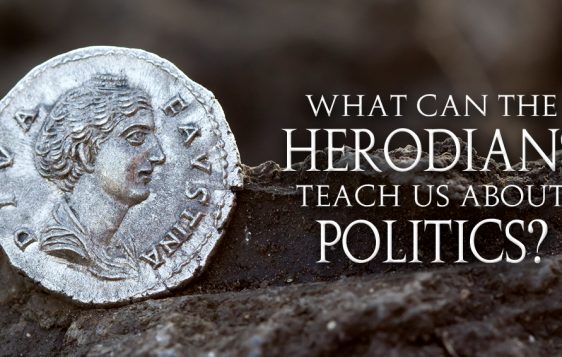 The Herodians—who were they and why does it matter?

This article is the continuation a six-part mini-series that will look at the six groups formed between the Old and New Testaments, five of which are mentioned in the Gospels and Acts: Pharisees, Sadducees, Herodians, Zealots, Sicarii, and Essenes.

So who were the Herodians? This group may not ring a bell. They were the third of the three mainstream groups or factions in Jerusalem and Judea at the time of Jesus. They are specifically mentioned three times in the New Testament—once by Matthew (22:16) and twice by Mark (3:6, 12:13). The Herodians—as you have probably guessed by now, were supporters of King Herod and his dynasty.

King of the Jews But Kind to the Romans

Despite being “king of the Jews,” Herod the First was Jewish—he was an Edomite, people who lived south of Judah. The Edomites were descendants of Esau—yes, the same Esau that had a major sibling rivalry with his brother Jacob—the ancestor of the Jewish people. Though Herod was raised in the Jewish faith, there was still a lot of tension between him and the people he ruled.

So how did a non-Jew become the king of the Jews? Herod was very politically savvy. He was tight with Roman leader Marcus Antonius (Mark Antony) and yes, the same Mark Antony that made the speech after the death of Julius Caesar you had to memorize in school: “Friends, Romans, countrymen, lend me your ears. I come to bury Caesar, not to praise him.”

When Herod came to power, he spared many people from the former ruling family as a way of promoting peace and even married one of the daughters of the former ruler. This didn’t work out so well, because his new mother-in-law began to subvert his rule. She went as far as befriending the wife of Marcus Antonius, Cleopatra—yes, that Cleopatra—in an effort to have her convince her hubby to re-establish the old ruling dynasty. Herod didn’t like this so he—you know, killed his mother-in-law, his wife, and many in the family.

Herod was willing to do anything to hold on to the throne—that’s why when the Wise Men told him that a new “king of the Jews” had been born, he doesn’t hesitate to kill all male children under two years of age.

When Julius Caesar was killed in 44 BC, there was considerable political turmoil in Rome. The Roman Senate had hoped to return the Roman Empire to the constitutional Roman Republic. Marcus Antonius wanted to be the next Caesar and struck a compromise with the Roman Senate to make that happen. But when Julius Caesar’s will was read, his successor was named as Octavian—his grand nephew.

Political Climate Before Christ Was Born

Why is all this important? Because that’s the political landscape that Jesus was born into. Luke 1:5 says, “When Herod was king of Judea . . . ” and Luke 2:1 reads: “At that time the Roman emperor, Augustus, decreed that a census should be taken throughout the Roman Empire.”

(Why Augustus? Well, Octavian changed his name in 27 BC to Caesar Augustus.)

Herod’s rule wasn’t all bad. In an effort to appease the Jewish people he rule, he undertook vast building projects that included grand harbors, many fortresses (including Masada—keep that in mind for another article), and he greatly expanded and upgraded the Temple in Jerusalem.

So the Temple we see in the New Testament—the one Jesus visited often—was built by Herod.

Jesus is on the Scene

All of that history to say that the Herodians were active political supporters of Herod and his successors. Though their beliefs lined up much closer to that of the Pharisees than the Sadducees—they believed in the afterlife, in angels and demons, in the resurrection of the dead—they often clashed with the Pharisees because of their support for Herod and the Roman Empire. The Sadducees didn’t like them because they rivaled them for political power.

The Herodians were very politically active and though they were Jewish, they often went along with Herod and the Romans for political expediency—so they leaned into Greek culture. Though the Pharisees, Sadducees, and Herodians rarely agreed on anything, that doesn’t mean they never did. The one thing that united all three of these groups was their need to get rid of Jesus:

– The Pharisees hated Jesus because he rejected the Oral Law.

– The Sadducees hated Jesus because of theological differences and Jesus encroaching on their political power.

– The Herodians wanted to eliminate Jesus because of the threat He posed for the Herod family—after all, Herod Antipas wanted Jesus assassinated (See Luke 13:31-33).

The Herodian party faded from existence as Herod Agrippa the Second was expelled from Jerusalem in 66 AD in a rebellion. To end the rebellion, Rome sacked Jerusalem in 70 AD. Now the Herodians are just a footnote in the history of the Herodian dynasty.

Takeaways From the Herodians

All three times the Herodians are mentioned in the Bible they are working with the Pharisees to defeat Jesus.

You see, in the eyes of the Herodians, the Herods were saving Jerusalem and Judea from complete conquest by being a go-between for the Jewish people and Rome. Herod made the holy Temple even more extravagant. In their eyes, the Herods were the saviors.

Today, we’d never elevate politicians to unhealthy levels, would we? Supporters of our former President Trump were often criticized as elevating him to the level of Savior. But it’s not just Trump; I’m old enough to remember the same thing with President Obama when ladies swooned at his rallies and public school children sang rewritten Bible songs about him.

I’m not labeling politics as sin, nor am I saying that it is wrong to strongly support political candidates. Here’s what IS wrong: elevating your candidate of choice to the level of savior and making politics your religion. Whether you think the current presidency will be good for the nation or bad for the nation, your job as a Jesus follower is to pray for him and his administration.

Here’s how Paul put it: “Pray this way for kings and all who are in authority so that we can live peaceful and quiet lives marked by godliness and dignity.” The kings—Caesar—that Paul reminded Timothy to pray for were much worse than anyone who has been in the White House, yet we are to pray for them. To what end? So that Christians “can live peaceful and quiet lives”.

We just want be left alone to worship God as we see fit and do the work God has called us to do. I love the next phrase . . . Paul continued: “This is good and pleases God our Savior.” It pleases God when you pray for the president—regardless of what you think or how you voted.

Bottom line: Don’t make politicians your savior—because it won’t save you. Yes, be involved in politics, but don’t elevate it to a religion. All that stuff will fail, but God never will.

Before we go, I want to remind you that Lifeword has a huge catalogue of Christian programming that will keep you encouraged and strengthen your faith. Times are uncertain, so if you want to listen and watch content that is biblically sound, head over to Lifeword.org—they’ve got it for days!
See you next time—grace and peace.

Copyright © 2021 by Stephen Castleberry @  https://www.youtube.com/watch?v=KKEEl1qfyts No part of this article may be reproduced or reprinted without permission in writing from Lifeword.org.