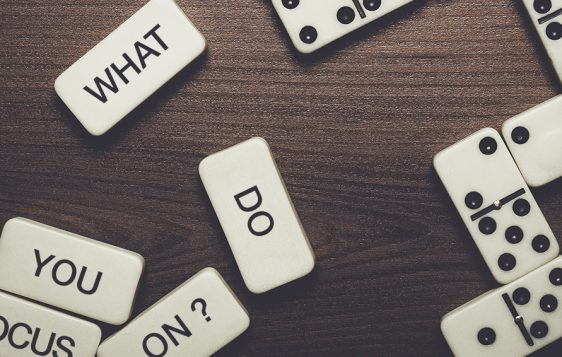 It had been ages since I had played the “normal” version (not Dominican-style, not 42, not Mexican train, but plain-old dominoes).

There’s actually quite a bit of strategy involved in this timeless competition, but my head was so consumed by adding more points that I struggled playing strategically or considering what other points I was setting up people for.

My father has played dominoes his entire life and for many years, he would play virtually on his phone or computer with people all over the world.

I started overthinking things and sweating more profusely when he entered the ring.

Let’s just say in that round my partner and I were at least 100 points behind the entire game.

Sometimes we can be so focused on ourselves or the “points” we can score in life to really open our eyes and see other possibilities around us.

A man who had this problem was a King named Saul.

He was handsome, tall and had led his people into many victories. But here’s the catch: The Lord had just rejected Saul as King over Israel due to his disobedience. In fact, God had already found another – a mere boy, but one who sought after God’s heart. This boy was currently employed as an armor bearer and a harpist to soothe Saul’s torment after the Spirit of God had left him (1 Samuel 16:14).

This boy’s name was David.

In 1 Samuel chapter 17, Saul and the Israelites were in a stand off against the Philistines.

The Philistines’ champion – Goliath of Gath, challenges Israel to send one man to fight him in order to decide the battle, rather than waste many lives in open warfare.

Goliath is no ordinary champion in the eyes of the world at this time. He is probably over nine feet tall, wears over 100 pounds of armor and hefts a sword three times heavier than the average Joe.

Goliath is a giant, a master champion, and when the Israelites see him enter the “ring”, they are overwhelmed with fear (1 Samuel 17:11).

And for 40 days, every morning and evening, Goliath struts out in front of Israel, mocks them, and dares one of them to come out and face him.

No one does – not even for the reward of living tax free and marrying a princess that King Saul promises to give.

Why doesn’t Saul fight? He is afraid. Though he is the leader and King of Israel, all he sees when he looks at Goliath is an undefeatable opponent. Instead of calling upon God for help, he waits for someone else to volunteer.

David comes to camp bringing food for his three older brothers, assesses the situation, and is brought to King Saul (1 Samuel 17:32-36).

Saul replies, “Don’t be ridiculous! There’s no way you can fight this Philistine and possibly win! You’re only a boy, and he’s been a man of war since his youth.”

But David persists, “I have been taking care of my father’s sheep and goats,” he said. “When a lion or a bear comes to steal a lamb from the flock, I go after it with a club and rescue the lamb from its mouth. If the animal turns on me, I catch it by the jaw and club it to death. I have done this to both lions and bears, and I’ll do it to this pagan Philistine, too, for he has defied the armies of the living God! The Lord who rescued me from the claws of the lion and the bear will rescue me from this Philistine!”

Saul finally consents. “All right, go ahead,” he said. “And may the Lord be with you!”

Saul gives David his own armor – but David is not used to them and selects five smooth stones from a stream instead along with his sling and staff.

Goliath walks out to face him and sneers at the boy in contempt, roaring, “Am I a dog that you come at me with a stick?” He curses David by the names of all the gods of Philistia. He yells, “Come over here, and I’ll give your flesh to the birds and wild animals!”

David, indomitable, replies, “You come to me with sword, spear, and javelin, but I come to you in the name of the Lord of heaven’s armies—the God of the armies of Israel, whom you have defied. Today the Lord will conquer you . . . and everyone assembled here will know the Lord rescues his people, but not with sword and spear. This is the Lord’s battle, and he will give you to us!”

As Goliath moves closer to attack, David quickly runs out to meet him. Reaching into his shepherd’s bag and taking out a stone, he hurls it with his sling and hits the Philistine in the forehead. The stone sinks in, and Goliath stumbles and falls face down on the ground.

And with a sling, a stone and the power of God, David triumphs over the giant, kills him with Goliath’s own sword, and the Philistines flee.

David proves nothing is impossible with God.

So are you a Saul or a David?

When something happens in life that rattles you to your core, do you start sweating and overthinking things?

When you face insurmountable odds, is your focus inward or outward? Do you focus on only what’s possible in your strength or do you rely on the strength of the Most High God?

There are battles that cost more to lose than a simple dominoes match.

In Psalm 34, David praises the Lord:

“I prayed to the Lord, and he answered me. He freed me from all my fears. Those who look to him for help will be radiant with joy; no shadow of shame will darken their faces. In my desperation I prayed, and the Lord listened; he saved me from all my troubles. For the angel of the Lord is a guard; he surrounds and defends all who fear him.

Copyright © 2020 by Melody Turner @ https://mxtv.org/living-victorious-part-two/. Used with permission. No part of this article may be reproduced or reprinted without permission in writing from Lifeword.org