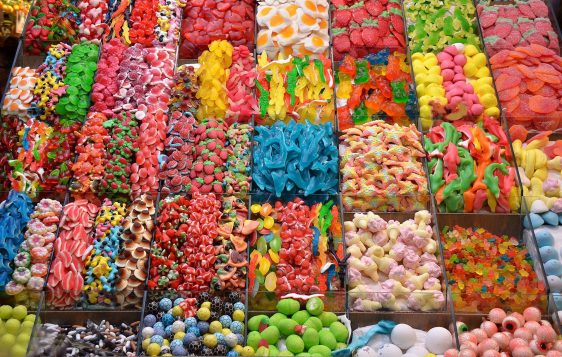 In the movie Willy Wonka and the Chocolate Factory, five kids find golden tickets inside the wrapping of a chocolate bar which awards them a chance to go inside a massive chocolate factory.

These five kids, along with a guest of their choosing, enter through the main gates and follow Wonka into the factory. But, as they enter into the main atrium, they cannot believe what their eyes are seeing.

A river of chocolate! This entire room is completely made of candy – a kids dream!

But not one of them is allowed to go further into the factory until Wonka says so, he is in control. He created this, “world of pure imagination” and has authority. For years, people dreamed about what’s inside his factory, and now, 10 lucky people get to see it.

And it is beautiful! I can only imagine the rush they feel and the urge to step into this amazing creation. But they had to wait.

They were not patient.

And as soon as Wonka gave the OK to explore, almost every guest begins to devour the beautiful and tasty things around them. As they plunge into their selfish quests to fulfill their desires and greed for more, they move through the area like a band of locusts on a harvest.

Not once do they give credit to Wonka for his masterpiece.

At the end of the movie, we find out it is all a test. A test to see who will receive Wonka’s factory.

None were found worthy, until Charlie offered up a gobstopper given to him, sacrificing the chance to take it with him.

And then Charlie won.

Like Charlie and the other guests had to wait on Wonka to lead them through his factory, so too did Noah have to wait on God to lead him off the boat into the new world after the flood.

“In the six hundred and first year, in the first month, on the first day of the month, the water that had covered the earth was dried up. Then Noah removed the ark’s cover and saw that the surface of the ground was drying. By the twenty-seventh day of the second month, the earth was dry. Then God spoke to Noah, ‘Come out of the ark, you, your wife, your sons, and your sons’ wives with you. Bring out all the living creatures that are with you—birds, livestock, those that crawl on the earth—and they will spread over the earth and be fruitful and multiply on the earth.’ So Noah, along with his sons, his wife, and his sons’ wives, came out. All the animals, all the creatures that crawl, and all the flying creatures—everything that moves on the earth—came out of the ark by their families. Then Noah built an altar to the Lord. He took some of every kind of clean animal and every kind of clean bird and offered burnt offerings on the altar.” (Genesis 8:13-20).

Noah and his family have been on an ark with stinky animals for more than a year when the rains finally stop, and the water recedes. They remove the covering of the ark and they can see the vast land before them.

But, like Charlie and the others in Willy Wonka’s chocolate factory, they wait patiently for the Lord to give them the OK before getting off of the boat.

God is the creator of the world and He deserves honor and respect. He spared the lives of Noah and his family and is giving them an opportunity for a new life.

When God gives the OK, they exit the ark with the animals too.

But notice the first thing Noah does: He builds an alter and makes sacrifices to the Lord.

He could have gone crazy like Wonka’s guests did and explore the land with an attitude of self-indulgence, but he chooses God first.

Sometimes in our own lives it’s hard to be patient on the Lord.

Sometimes it feels like God is taking forever to answer a prayer request or a need we have.

But instead of giving up on God and trying to do life without him, we should continue to patiently wait and rest in His timing. By waiting on God, we bring honor to Him.

Today, let us stop what we are doing and honor Christ first. Take time to pray, study His Word and reflect on His message.

You will not regret it!