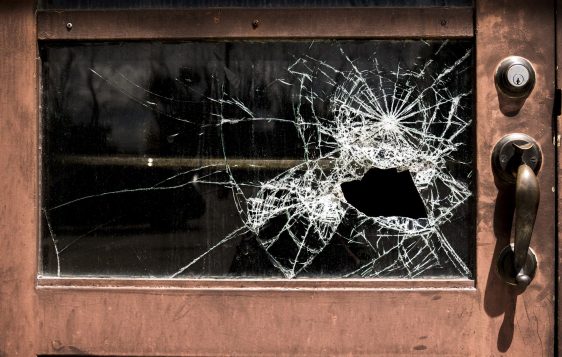 Mayberry was a fairly quiet and peaceful town. Most days, Sheriff Taylor and Deputy Fife didn’t have a lot of worries on their hands, that is, until a window was broken.

You know what that means… Ernest T. Bass.

Anytime a window was busted in town, everyone knew who to look for.

Ernest was up to his old tricks again. Except, busting windows never really got him anywhere except for drawing the wrong kind of attention.

It’s sad to say, but the great Abraham seemed to be a little like Ernest, and he was back to his old tricks again in Genesis chapter 20.

“From there Abraham traveled to the region of the Negev and settled between Kadesh and Shur. While he was staying in Gerar, Abraham said about his wife Sarah, ‘She is my sister.’ So King Abimelech of Gerar had Sarah brought to him.” (Genesis 20:1-2)

We’ve heard a similar story before in Genesis chapter 12, and it wasn’t a good encounter then so we would think Abraham has learned his lesson.

But what made Abraham think this was a good idea now? His deceit could cause some major problems.

“But God came to Abimelech in a dream by night and said to him, ‘You are about to die because of the woman you have taken, for she is a married woman.’ Now Abimelech had not approached her, so he said, ‘Lord, would you destroy a nation even though it is innocent? Didn’t he himself say to me, ‘She is my sister’? And she herself said, ‘He is my brother.’ I did this with a clear conscience and clean hands.’ Then God said to him in the dream, ‘Yes, I know that you did this with a clear conscience. I have also kept you from sinning against me. Therefore, I have not let you touch her. Now return the man’s wife, for he is a prophet, and he will pray for you and you will live. But if you do not return her, know that you will certainly die, you and all who are yours.’ Early in the morning Abimelech got up, called all his servants together, and personally told them all these things, and the men were terrified. Then Abimelech called Abraham in and said to him, ‘What have you done to us? How did I sin against you that you have brought such enormous guilt on me and on my kingdom? You have done things to me that should never be done.’ Abimelech also asked Abraham, ‘What made you do this?’ Abraham replied, ‘I thought, ‘There is absolutely no fear of God in this place. They will kill me because of my wife.’ Besides, she really is my sister, the daughter of my father though not the daughter of my mother, and she became my wife. So, when God had me wander from my father’s house, I said to her: Show your loyalty to me wherever we go and say about me: ‘He’s my brother.’ Then Abimelech took flocks and herds and male and female slaves, gave them to Abraham, and returned his wife Sarah to him. Abimelech said, ‘Look, my land is before you. Settle wherever you want.’ And he said to Sarah, ‘Look, I am giving your brother one thousand pieces of silver. It is a verification of your honor to all who are with you. You are fully vindicated.’ Then Abraham prayed to God, and God healed Abimelech, his wife, and his female slaves so that they could bear children, for the Lord had completely closed all the wombs in Abimelech’s household on account of Sarah, Abraham’s wife.” (Genesis 20:3-18)

Sarah was beautiful and he thought anyone with power who saw her would kill him to have her. But the last time he used the same lie, it ended badly for the king. This time, he should have come up with a better plan. But instead, he threw the same stone because he didn’t trust the Lord to protect them.

Here’s my favorite part: “But God…”

Don’t you love this? That’s how verse 3 begins when the Lord steps in.

Here are some important truths we can gain from this text.

1. God’s will prevails. Even when we stupidly try our own way, it’s His will that has the final say. It happens throughout our lives on a daily basis even if we don’t realize it.

God had a plan for Abraham and Sarah, and it didn’t involve her becoming Abimelech’s wife.

2.  Even our heroes fall. Abraham is a great hero of the faith, but even he was a sinner. He tried to pass this off like it was only “partially” a lie, because technically she was his half-sister.

We should never worship ordinary men; our focus should be on following Jesus Christ. Men will fail because they are only human.

3. Assumptions get us nowhere. Abraham assumed King Abimelech was evil. He knew nothing about him and decided he was a murderer.

We should be careful to take the time to assess the character of people before we assume anything.

4. Not knowing is not an excuse. Abimelech was about to commit adultery with Sarah before God stepped in. The king claimed his innocence before God, but it wouldn’t have changed the fact that sin is still sin.

An example from an excerpt says it this way: “You can pick a mushroom believing it to be safe but it’s actually poisonous. Just because you didn’t realize it was poisonous when you ate it doesn’t protect you from the effects.”

5. God doesn’t discard us when we sin. I don’t know how the Lord does it. He sees everything we do. He hears our words, He sees our actions, and He even knows our thoughts

And yet, He still loves us.

Lamentations 3:22-23 sums it up when Jeremiah writes, “Because of the Lord’s faithful love we do not perish, for his mercies never end. They are new every morning; great is your faithfulness!”

We can really mess things up, but God is always there. His perfect plan will always prevail, and we can learn valuable lessons from our mistakes and the mistakes of others.

Today, seek the Lord’s will. Ask Him to guide you to the right answers. Let Him lead you to righteousness.

And when we fail, remember, He is faithful and just to forgive when we repent.