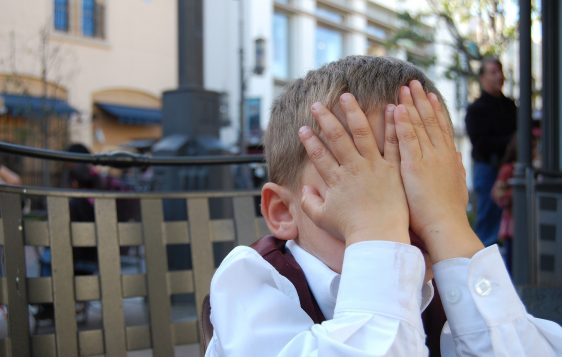 In the third grade, my bus buddies were Matt and Johnny. We had ridden the bus together since kindergarten when we first found ourselves getting into trouble and stirring up trouble to and from school.

One day, we thought it would be funny to draw a picture of our substitute teacher that day. It was a terrible and ugly picture with harsh words. But since we were dumb kids, we laughed and thought it was the funniest thing.

The next day, we were called into the office. Someone had found the picture and we were being questioned about it. Our Principal was a cool guy to us kids, but we were also scared to death to be called to his office.

My name was called to go talk with him, and I had no idea what Johnny or Matt had said. So, when they first asked me about it, I lied. I said I didn’t do it.

Then, the truth came out.

Brooks already knew I was a part of it, he just wanted to hear it from me. The other two had sung like birds and had told him the truth.

And then there was me: I had lied trying to save my own skin. I realized there was no way out. I was caught and I had to own up to it.

So, I hung my head in shame and said I was sorry.

“God said to Abraham, ‘As for your wife Sarai, do not call her Sarai, for Sarah will be her name. I will bless her; indeed, I will give you a son by her. I will bless her, and she will produce nations; kings of peoples will come from her.’ Abraham fell facedown. Then he laughed and said to himself, ‘Can a child be born to a hundred-year-old man? Can Sarah, a ninety-year-old woman, give birth?’ So Abraham said to God, ‘If only Ishmael were acceptable to you!’ But God said, ‘No. Your wife Sarah will bear you a son, and you will name him Isaac. I will confirm my covenant with him as a permanent covenant for his future offspring. As for Ishmael, I have heard you. I will certainly bless him; I will make him fruitful and will multiply him greatly. He will father twelve tribal leaders, and I will make him into a great nation. But I will confirm my covenant with Isaac, whom Sarah will bear to you at this time next year.”  (Genesis 17:15-21)

“‘Where is your wife Sarah?’ they asked him. ‘There, in the tent,’ [Abraham] answered. The Lord said, ‘I will certainly come back to you in about a year’s time, and your wife Sarah will have a son!’ Now Sarah was listening at the entrance of the tent behind him. Abraham and Sarah were old and getting on in years. Sarah had passed the age of childbearing. So she laughed to herself: ‘After I am worn out and my lord is old, will I have delight?’ But the Lord asked Abraham, ‘Why did Sarah laugh, saying, ‘Can I really have a baby when I’m old?’ Is anything impossible for the Lord? At the appointed time I will come back to you, and in about a year she will have a son.’ Sarah denied it. ‘I did not laugh,’ she said, because she was afraid. But he replied, ‘No, you did laugh.’  (Genesis 18:9-15)

Abraham laughed at the thought of having a child at his age, and Sarah laughed too. They doubted the power of God. But Abraham acknowledged God and their conversation continued.

But with Sarah, she wanted to hide her disbelief. When asked why she laughed, she didn’t own up to it like Abraham, instead, she lied.

This is where we go wrong.

A few days ago, we talked about how God is omniscient, which means all-knowing and all-seeing. How can we expect the Lord not to know our hearts and our secrets but when we are confronted about them, we cover up our mistakes and lie.

Even when we do not confess something to the Lord, we lie to ourselves and to Him.

What is it that you need to bring before the Lord today?

He already knows, but like my principal, God wants to hear it from you.

Be open. Be honest. Be truthful.

And repent: turn away from it and run to God.