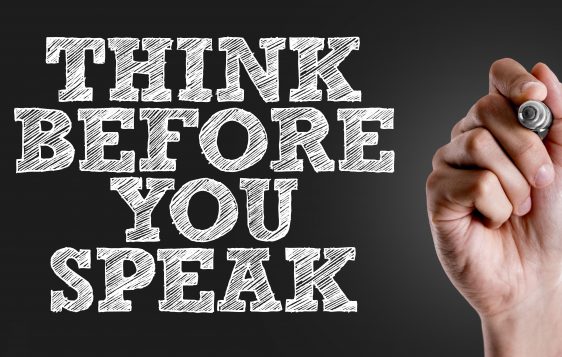 Do you remember the show Undercover Bosses? The idea was for the CEO to go undercover and see what the workers did on a day-to-day basis, how they felt about their work and the company and to see if there were changes that needed to be made from the ground up.

Many times, it ended with the boss meeting and “befriending” a sweet person who was a hard worker and struggling with something. The boss would end up doing something for their family when the big reveal came.

But there were always those few people that actually talked bad about the boss, to the boss… they just didn’t know.

They might be mad at the way they thought he was doing things or upset about new rules, regulations or changes.

It always resulted with them mouthing off. Sometimes they were so used to talking bad about the boss or slandering his name that they didn’t even really think twice about it. Their mindset was that the boss was “too good” to be down in the trenches with them so he would never overhear them.

What would you do if your boss overheard you saying those bad things about them and the company you work for? What if they heard you curse their name? What would be the right punishment for that?

As we study more through the book of Leviticus, we come to chapter 24 where we find out exactly how God feels about His name being taken in vain, cursed and blasphemed.
In this chapter, we meet a man, the son of an Israelite woman, but whose father was an Egyptian. While walking around the camp with an Israelite man, he blasphemed the name of the Lord and cursed.

The scripture doesn’t tell us exactly what he said, but we know God has already forbid that kind of speech. People overheard the man and grabbed him and took him into “custody” or ward, while they waited on the Lord to tell them what to do.

“And the LORD spake unto Moses, saying, Bring forth him that hath cursed without the camp; and let all that heard him lay their hands upon his head, and let all the congregation stone him. And thou shalt speak unto the children of Israel, saying, Whosoever curseth his God shall bear his sin. And he that blasphemeth the name of the LORD, he shall surely be put to death, and all the congregation shall certainly stone him: as well the stranger, as he that is born in the land, when he blasphemeth the name of the LORD, shall be put to death. And he that killeth any man shall surely be put to death.” (Leviticus 24:13-17)

Do you think the Lord was serious? Absolutely.

And He is so today as well. We flippantly take the Lord’s name in vain, even coming up with easy acronyms like OMG, to make it sound better. Even walking down the halls at work or in a school I hear God’s name being taken in vain. People really don’t understand the magnitude of their sin when they do that. It’s either that or they do know and they don’t care. They don’t think the “Boss” is listening. They never consider that He hears all and sees all. He knows our thoughts, our actions and our words. And every word spoken we will give an account for.

Think before you speak. Even your thoughtless words matter.