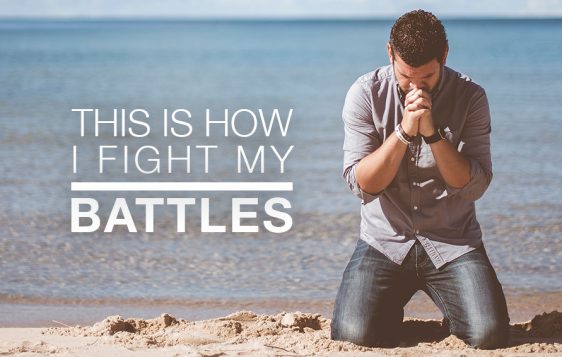 Instinctively we hide or run away when we are afraid. This is why so often in history, present-day and in pop culture, we admire those who are brave and decide to face their fears head on.

We watch dozens of movies about superheroes (or a team of them if you are into the Avengers like I am) who face insurmountable odds and defeat their enemies.

We remember those in history who had the courage to fight, lead or persevere even though the world may have been against them.

We remember George Washington who lead a rag-tag army to beat back the greatest global superpower of that age.

We remember Harriet Tubman, who led hundreds into freedom and out of slavery.

What do all of these people have in common? Courage.

But there was another superhero in the Bible who revealed this character quality of courage – Jonathan, the son of King Saul back in the days before David slew the giant.

In 1 Samuel chapter 14, we find King Saul camped out with his pared down army of 600 troops underneath a pomegranate tree and protected from his enemies by a rocky chasm.

King Saul had just lost 2,400 men because of his fear, weakness and poor leadership. He had no plan for an offensive attack to beat back the Philistine army (Israel’s top enemy), so his son Jonathan took matters into his own hands, setting off with his armor bearer to the Philistine’s outpost.

While climbing down a cliff to make their way to the enemy’s camp, Jonathan said to his armor bearer, “Perhaps the Lord will help us, for nothing can hinder the Lord. He can win a battle whether he has many warriors or few!”

After making it to the other cliff Jonathan suggests that they call up to the Philistines, and if their response is to come up and fight, it would be a sign that the Lord would help them be victorious.

When those who were guarding the Philistine camp saw Jonathan and his armor bearer, they shouted, “Come on up here, and we’ll teach you a lesson!”

This was the sign Jonathan was waiting for. He and his armor bearer clambered up the cliff and took out 20 men. Then a panic suddenly swept through the camp, an earthquake struck, and the soldiers scrambled, terrified.

On the other side of the chasm, Saul’s army noticed the confusion of the enemy camp and attacked them.

During the battle, Philistines killed Philistines, the Hebrews within the camp revolted, and the Israelites who had been in hiding (probably the deserters) helped chase away the survivors.

The Lord saved Israel that day – all because two men were brave enough to trust God for the victory.

Jonathan and his counterpart could have easily turned back and quit three times:

– when it required great physical effort to scale the cliff

– when it became dangerous and life-threatening at the top

But they didn’t turn back, showing true courage and faithfulness with their obedience to God.

Do you have unstoppable courage today?

Are you willing to scale that “cliff “ in your life to achieve victory?

Do the things that matter in your life right now reveal that God has done great things because of courageous faith, or are they only the result of going with the flow?

Living by faith is not a matter of knowing the future but of knowing God’s will and purpose for your life and developing godly character.

What is it that God has asked you to do that requires courage?

It might be permeated with uncertainty; it might take effort, or it might  even be dangerous – but God won’t ever leave you to fight your battles alone.

So take heart today and have courage. Whatever you are going through, God will be with you every step of the way.

Copyright © 2020 by Melody Turner @ https://honest-maybe-relatable.com/2020/09/17/courage-in-the-face-of-fear//. Used with permission. No part of this article may be reproduced or reprinted without permission in writing from Lifeword.org.