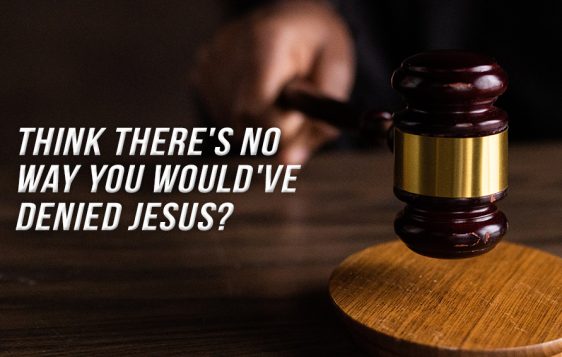 The bailiff procures the vote from the jury.

The courtroom holds their breath.

The prosecutor looks hopeful, while the defendant holds his face between his hands.

“The jury finds the defendant… guilty.”

And with a bang of the gavel, the defendant is taken away. An innocent victim was framed for a crime he did not commit.

Sound familiar to you?

Who likes to read books rife with courtroom battles, prejudiced juries, underdog lawyers, and a mysterious defendant? Did they or didn’t they is always the question.

And after hundreds of pages, there’s usually a surprise twist ending (at least if you are reading a John Grisham novel).

In the life of Jesus Christ, he is sentenced for a crime he did commit – claiming to be God himself, which was blasphemy according to the religious law of the day.

The punishment for the crime? Death.

After being arrested in the Garden of Gethsemane and betrayed by one of his very own, his disciples scatter . . . though Peter did try to fight back and cut off a poor fellow’s ear, just to be rebuked by Christ who healed the servant named Malchus.

Anyways, Jesus is taken to a trial in front of the Sanhedrin (the combined religious rulers of both Pharisees and Sadducees). His beloved disciple John was able to watch it, and Peter remains outside in the courtyard, enveloped in darkness and his fear and anger.

First off, this trial is illegal, and in today’s world, all the right elements for a lawyer to demand a mistrial. By their own rules, the Sanhedrin were not allowed to have a trial at night or during an important festival (two strikes, since it was Passover). Furthermore, they could not pass the death penalty immediately and needed two or three witnesses to agree on the details of the crime. (Technically, anyone giving false evidence would receive the same punishment as the person on trial: death.) As we will read, the Sanhedrin broke all of these rules.

This story is in all four Gospel accounts, but for simplicity, we will be looking at this story from the book of Matthew.

“The chief priests and the whole Sanhedrin were looking for false testimony against Jesus so that they could put him to death, but they could not find any, even though many false witnesses came forward. Finally, two who came forward stated, ‘This man said, ‘I can destroy the temple of God and rebuild it in three days.’”

The high priest stood up and said to him, “Don’t you have an answer to what these men are testifying against you?” But Jesus kept silent. (Matthew 26:59-63)

Isn’t it interesting the entire Sanhedrin was looking for false testimony? They knew they couldn’t give Jesus the death sentence by playing by the rules! Ironically, none of their “false” witnesses could get their stories straight until finally two came up and misquoted the same line about Jesus destroying the temple. (He probably was talking about his bodily resurrection.)

Still, the false testimony wasn’t enough for what they wanted. So Anna questions Jesus himself, trying to force Jesus to testify against himself (again, illegal). Jesus remains silent until the charge against him is precise and complete and entirely true:

“The high priest said to him, ‘I charge you under oath by the living God: Tell us if you are the Messiah, the Son of God.’

‘You have said it,’ Jesus told him. ‘But I tell you, in the future, you will see the Son of Man seated at the right hand of Power and coming on the clouds of heaven.’

Then the high priest tore his robes and said, ‘He has blasphemed! Why do we still need witnesses? See, now you’ve heard the blasphemy. What is your decision?’

They answered, ‘He deserves death!’ Then they spat in his face and beat him; others slapped him and said, ‘Prophesy to us, Messiah! Who was it that hit you?’

Jesus’ reply was a well-known messianic prophesy from Daniel 7:13-14 that the Sanhedrin were quite familiar with. By stating this verse, he is claiming that he IS the Messiah – he is God in the flesh.

This is enough for the Sanhedrin to get what they want – a death sentence. However, they do not have the power to give executions and have to go through Rome. But they also realize the charge of claiming to be a Messiah, a king, and savior would be a flagrant issue for the empire. There was only one king in the realm – Caesar.

Also, the High Priest tore his robes as a symbol of horror, which was a cultural custom among Jews for thousands of years (and also used to showcase grief or extreme sorrow).

As for the mocking of Jesus . . . It is slapping the face of deity.

The Sanhedrinists smell the blood in the water. Despite having a farce of a trial, they have Jesus exactly where they want him – guilty with the charge of claiming to be king. To get the approval of Rome, they have to at least pretend they condemned him legally and had another hearing in the morning to have Jesus confess his crime.

On the way to the hearing, Jesus is brought through the courtyard from his holding place, probably a cellar or a cistern, just in time for the rooster to crow a third time . . .  As Peter denies his Christ for the third time.

“Now Peter was sitting outside in the courtyard. A servant girl approached him and said, ‘You were with Jesus the Galilean too.’

But he denied it in front of everyone: ‘I don’t know what you’re talking about.’

When he had gone out to the gateway, another woman saw him and told those who were there, ‘This man was with Jesus the Nazarene!’

And again, he denied it with an oath: ‘I don’t know the man!’

After a little while, those standing there approached and said to Peter, ‘You really are one of them, since even your accent gives you away.’

Then he started to curse and to swear with an oath, ‘I don’t know the man!’ Immediately, while he was still speaking, a rooster crowed. Then the Lord turned and looked at Peter. So, Peter remembered the word of the Lord, how he had said to him, “Before the rooster crows today, you will deny me three times.” And he went outside and wept bitterly. (Matthew 26:66-72; Luke 22:60-62).

In the last chapter, while the disciples were celebrating the Passover before they went to the Garden of Gethsemane, Jesus told Peter that he would deny Him three times that very night before the rooster crowed… What Jesus had foretold had come to pass.

And Peter, in brokenness and shame, wept. He would not see Jesus again until after the resurrection.

In summary, the defendant has been accused of blasphemy and condemned to death. The Sanhedrin will take him to both the Roman and the Galilean governments (Pilate and Herod) to get the crucifixion they desire.

One of the defendant’s best friends, Peter, has failed him.

Mocked and scorned, Jesus knows this road will end in his grisly death.

But all I can do now is remember the sacrifice Jesus made for me and to be faithful to him when times do seem dark and despairing – because Jesus has always been faithful to me.

2,000 years ago, the trial of the millennia occurred. Do we remember it?

In our daily lives, do we remember who Jesus claimed to be and who he is? Do we condemn him for it, or do we rejoice?

The choice is yours.

YOU are the jury.

Is Jesus guilty of being God? And thus – is he the Messiah and Savior of your life? Or was he just a man – wrongly convicted of a crime he went to his grave for?

Only you can decide how Jesus will impact your life. But I beg you to consider, deliberate and vote where all the evidence points to the truth – Jesus is God.

In love and truth,

Copyright © 2021 by Melody Turner @ https://mxtv.org/on-trial/ . No part of this article may be reproduced or reprinted without permission in writing from Lifeword.org.