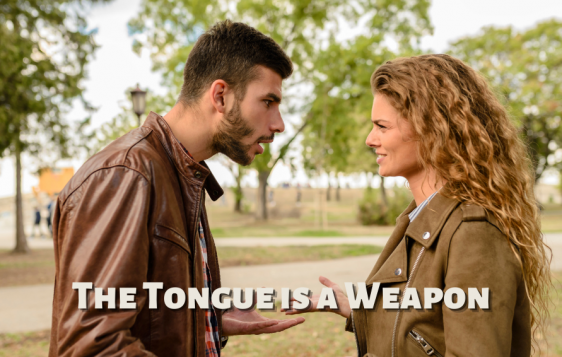 It’s a fascinating thing, really. I spent a couple years as a firefighter while living in the Hot Springs, Arkansas area, and during that time I learned things about fire that I never knew.

Did you know that (1) fire makes its own atmosphere/weather?

Or how about this: (2) Fire can be used to fight fire?

Better yet: (3) The most common way fire kills isn’t by burning people alive, but rather through smoke inhalation?

Let’s dive into the idea of fire this morning:

Did you know that your tongue makes its own atmosphere/weather? So often the conditions around us in life are caused or determined by our tongue.

Have you ever noticed that if you are negative all the time, many of those in closest proximity to you will also be negative?

Or if you spend a large portion of your time gossiping, many of the people around you will do the same?

Or if you run someone down constantly, many times some of those in your immediate circle of influence will begin to do the same?

And have you ever noticed that at the height of your fire-breathing, there is also a sore lack of accountability for your negative or hurtful words?

Your fire-tongue is building its own atmosphere and weather.

Did you know that your tongue can actually help put out fires that are started by other people’s tongues? For instance, if someone is gossiping about you, sometimes the best way to put out the hellish fire of gossip is to simply say nothing – to withhold added fuel from the fire. Your ability to control your tongue may be able to extinguish the fiery darts of another.  If you’re surrounded by negative words and attitudes, your tongue – when speaking positive, godly things – can actually sometimes put out the flames of negativity or critical attitudes. Controlled fire can be used to fight out-of-control fire.

Oh, and did you know that words themselves don’t kill people? No, rather it’s the perceived attitudes/opinions behind those words that do the damage. If someone says you’re fake or lousy, the words themselves probably don’t do damage to how you feel. Rather, what really hurts you is that you begin to perceive that the person who spoke those words feels that you’re fake or lousy.

You see, fire CAN kill, and words themselves CAN do damage. However, the majority of the time it’s the smoke that gets ya’.

We’ve all been hurt by fire, and no doubt we’ve all done our share of burning others. So today, would you join me in asking God to be our “firefighter” of sorts?  Would you ask Him to be the Lord of your mouth today?

That is, allow Him to be large and in charge of what you say TO and ABOUT others. Who knows – maybe it’s been a while since you allowed Him to take charge of your words.

Copyright © 2021 by Blake Martin  @  https://pastorblakeman.wordpress.com/2013/01/17/fire/ No part of this article may be reproduced or reprinted without permission in writing from Lifeword.org.