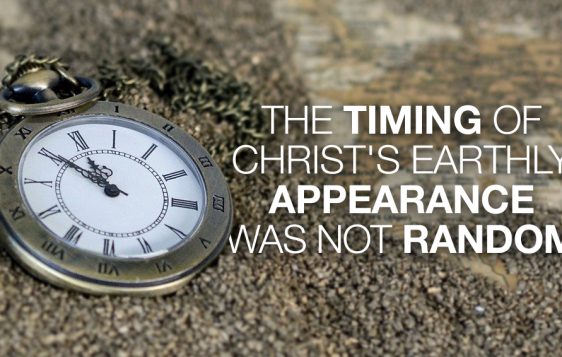 (The following is a transcript from Stephen Castleberry’s YouTube series: Bible Tidbits. Follow the link below to view the video.)

If God is all-knowing and all-powerful, then the birth of Christ wasn’t randomly placed in history, but exactly when God intended. So why did God send Jesus when at exactly that time? Let’s talk about it!

So why did Jesus come when he did? If God is sovereign, then he chose the exact time for the entrance of the Messiah. To be clear, God doesn’t explain why he chose to send Jesus when he did because God doesn’t need to explain that to us—that’s the theme of Job chapters 38 – 40. He’s God and we are not. But we can look back on history and speculate on the why of God’s timing.

You might be thinking, “How do we know that God waited for a precise moment of history to send Jesus? Maybe God was looking at the grand timeline of human history and randomly played ‘eeny-meeny-miny-mo’.”

First, God isn’t a haphazard God but an on-purpose God. We see that from both Scripture and the fine-tuning we see in the world around us.

Second, we actually see in Scripture that Paul believed God specifically chose this moment in history because it was the most conducive for the Messiah to make an entrance into the world.

Third, there was one language that united the Mediterranean world: Greek. Yes, the Roman Empire had vast influence in the first century, but it was the Greeks before them that gave them a common tongue. Through the conquests of Alexander the Great, a large part of the ancient world was taught the Greek language and customs.

Like today where English is the dominant language of business, culture, and science in our post-World War II world, there were local languages, but the Greek language was the one that most in the Roman Empire knew in addition to their native tongue. The New Testament was written in Greek so that people from Rome to Jerusalem could understand it. If you want to change the world and have your message heard, having a common language is key.

It may sound weird to say that roads played a role in the first coming of Jesus, but it was a HUGE deal. Here in the United States, our major roads are the interstates or, if you like the full name, the Dwight D. Eisenhower National System of Interstate and Defense Highways—but “Interstate” rolls off the tongue a lot easier.

Our Interstate highways were constructed for two reasons: economic trade and national defense. Though the idea of a national network of roads preceded World War I, the war put the idea of interstates on the back burner. After the war was over, the Army sent a team from Washington D.C .to San Francisco, including a young 28-year-old lieutenant, Dwight Eisenhower, to see how easy it would be to send the Army cross-country. It was terrible timing—so the idea was once again considered but put off for decades due to the Great Depression and World War II.

It was in the final days of World War II that the Supreme Commander of Allied Forces in Europe, Dwight Eisenhower, saw how helpful Germany’s “autobahn” network was to troop transport. Finally, in June of 1956, President Dwight Eisenhower signed the Federal Aid Highway Act creating the Interstates we know today.

What does all this have to do with Jesus? Rome had the same thoughts almost two thousand years earlier.

The fifth and last reason is pax Romana, Latin for “Roman Peace.” 27 BC to 180 AD was a time of relative peace and stability in the world because of how powerful the Roman Empire had become. This doesn’t mean there was no conflict but that there were no major conflicts that disrupted culture and economics on a large scale. If you need something to compare it to, we are living in a time that some call pax Americana.  This “American peace” is due to the relative peace and stability starting at the end of World War II and our unchallenged status as the world superpower.

This period of peace also allowed the Roman army and navy to protect land and sea routes to establish far reaching economic trade. If you have a message you want to share far and wide, you need a time of peace and stability to do it in.

So why did Jesus come when He did?

A large portion of the world used a common language (so the gospel could be understood).

Trade reached virtually all the world’s population (so the gospel could be spread).

The world was in a stable period of peace and prosperity (so the gospel could cross national and cultural barriers).

It was “the right time” for the gospel to be unleashed.

We could stop right now, and these would be interesting little tidbits, but let’s take it a step further: These were the right conditions for Christ’s first coming, but what about the second coming?

I would like to say that I’m not in charge of planning Christ’s return, I’m just looking forward to celebrating it—meaning that if Jesus doesn’t come back in the way I think he will, I won’t say it’s wrong. I’m convinced that there are a lot of end-times wonks that will pout all the way to heaven because Jesus came back in a way that didn’t fit with their theory. Hey, just be excited that the day of the Lord is nearer than yesterday and tell people about Jesus, OK?

With all that said, I do want to point this out. Did you notice how there were parallels to the time Jesus came first to the world we live in now—the post-World War II world?

We are once again united in a language—and not just English, but with AI translation.

We have something better than Roman roads and Interstates—we have the Internet.

We have global peace and prosperity due to America’s might.

This American Age has led to an unprecedented spread of the gospel across the world through open travel, world peace, and the digital revolution.

Lifeword is on the forefront of getting the gospel to the world using creative means. One of the prerequisites of Christ’s second coming is that the Good News would be presented to every people group worldwide. Lifeword is reaching the internet connected world through the Lifeword Cloud and the low tech portions of the world by equipping local churches with low-power radio broadcast stations—incredible stuff! If reaching a lost world through creative means is important to you, check out Lifeword.org to find out more about what they do.

I don’t know when that will be—maybe tomorrow or maybe in one thousand more years—but here’s what I do know: “The Lord isn’t really being slow about his promise [to return], as some people think. No, he is being patient for your sake. He does not want anyone to be destroyed but everyone to repent.”

If I was a betting man, I would Jesus’ return is sooner rather than later—make sure you know Jesus.