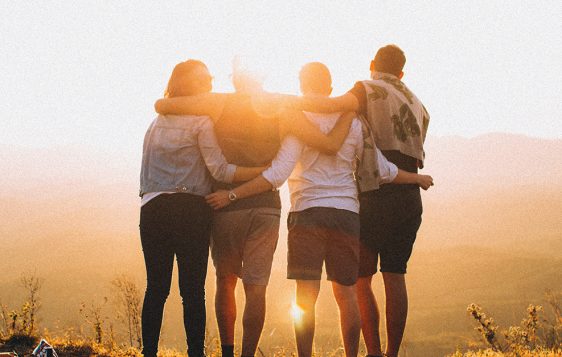 Friendships are often fickle. What’s the secret to keeping friends? I got a story for ya:

On an epic day in fifth grade, my best friend and I were duking it out with some seventh grade boys. In basketball, that is. Not fist fighting. Though let’s be honest – sometimes it came to that. Testosterone.

Anyway, they were older. Which meant we had to win. Especially since my crush at the time stood in the “audience.” It was a neighborhood pick-up game, so we had six people watching. The six people that wanted to play a three-on-three game after us.

The game ended when the first team reached 21 points. No winning by two. The score sat at 19 (them) to 18 (us). If you’ve ever played basketball, then you understand the cave-man strategy of being three points away from victory. All you want to do is shoot three-pointers. But the fifth grader percentage of making three-pointers is about 2.3%.

Well, my friend kept lobbing them up. Possession after possession. He hogged that ball and forced shots, over and over. Until we lost.

I can’t explain how mad I was. Our opponents chest-bumped, then said something mocking at us. And I lost it. I approached my friend, opened my mouth to start slingin’ words. But what happened next changed me forever.

“Justin,” he said, wiping away some sweat. “Dude, I am so sorry. I totally panicked, did everything wrong right there, and just blew it. I’m sorry.”

I’ll never forget that moment. I’ll never forget it because the strangest thing happened to me. All the rage bubbling inside my gut vanished. Just like that (*insert snapping sound*). I had nothing negative left to say. So I said, “Yeah, let’s rematch after this. We’ll take them…”

What a crucial take-away. Mistakes don’t kill friendships. Pride does. When mistakes are confessed and aired out, friendships remain strong. Why? Because mistakes are as normal to us humans as breathing is!

But when pride reigns supreme, even the best friendship grows calloused. Then resentful. Soon it loses its warmth. And the slow fade begins, both of you wondering what’s wrong. And then…it ends.

The words “I’m sorry” are some of the most powerful words in your arsenal. Use them. Every day. When a genuine heart sits behind them, friendships flourish. It’s the secret to keeping friends.