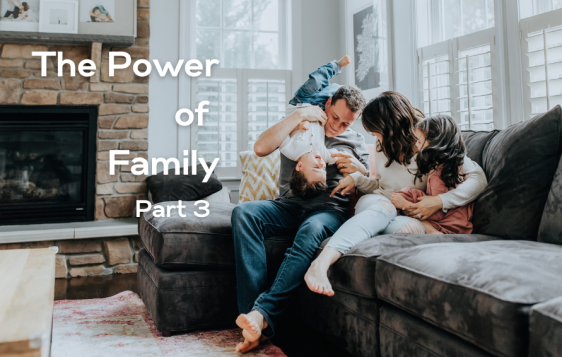 For the last installment of this series, we will look at how family influences culture. This topic is a good culmination of what we have talked about previously. But before we dive into this section I would like to share with you, on a more personal note, what I experienced recently that reinforces the concepts from the previous section on how family impacts security and courage.

Since my last blog, my Father has passed from this life to meet his Creator face to face. In his last two weeks, there were two situations that drove home the important role of family for security and courage not just as a child, but for a lifetime.

The first situation happened when I went to my parents’ house to spend some time with them. I climbed up beside my Dad as he sat in his bed and lay in his arms as I had done so many times as a child. I want you to know that I felt just as safe in his arms as I did when I was a small child in the same place. It did not matter that he physically couldn’t do much; it was more about who he is to me and how he valued me throughout my life that made me feel safe, not his ability at that moment.

The second situation happened when my Dad was nearing the end of his time with us and he began to “see” and talk about loved ones who had already passed. Until my Dad came to the assurance that even in heaven he would be surrounded by family he wasn’t ready to go and fought hard to stay among his family here on earth. After that assurance, he was so looking forward to being with his Mom and Dad again and we could see that it brought him comfort and courage to him as he journeyed from this life into the next.

Both examples point again to the power of the family to cultivate security and courage in its individual members, to aid them in facing difficulty throughout life as well as in death.

As we move to thinking about the impact of family on establishing culture, it’s important that we settle on a working definition for our discussion. People often define culture by a race or ethnicity or other distinction. But for our use, culture is an identity embraced and fostered by a group of people by social patterns, customs, religion, language, government, economy, and art. When we ponder this definition as it pertains to family, it is easy to conclude that culture is learned behavior. This is significant because it is a reminder that we have influence over how our children view the world, how they treat others, how they approach learning, how they make decisions, how they handle difficult situation, and many, many other things.

If culture is learned, then how do we teach our children the culture that we want them to have? There are two ways that cultural norms are passed on to the next generation:

When we think about communication, we typically are referring to the words we speak. But I would tell you that you are never not communicating. Facial expressions, body language and behavior are communicating all the time. Children are very perceptive and will pick up on nonverbal cues much quicker than you might think.  They are very quick to determine whether those behaviors and expressions match what you verbalize or whether they contradict.

We can talk about being kind to someone with our words but if those words are followed by a rolling of the eyes, it indicates to others that we have disdain toward the obligation of showing kindness to that person. Or if we talk about valuing people no matter who they are but we speak degradingly about people of other races or economic status or certain careers, or any other differences, we are not actually promoting valuing others as part of our culture. You may already be noticing that communication of ideas is only the beginning of creating culture, imitating or living out those ideals seal it as a way of life.  It becomes quite evident that core values are the foundation for establishing culture.

In a world with so many different cultures and ideas, a haphazard approach to parenting will likely lend itself to your messages being drowned out by the messages of those who spend the most time with your children and are the most intentional with their time.  Whatever message is loud enough, long enough, and often enough will be the one embraced by our young people.

As followers of Christ, core values that shape our culture should be based on principles found in God’s Word. But I have noticed that many of us put a limit on the extent to which we allow God’s principles to permeate our lives. For example, we may allow God’s Word to determine what we do on the day of worship but not allow God’s principles to impact our business conduct throughout the week, or we are careful to say a prayer over food and bed times but fail ask God for direction or strength for daily living.

Often we discipline our children for using foul or inappropriate language but fail to regulate our language when with friends or in a highly emotional situation.  We may be on our best behavior when the minister is present but act carelessly when it comes to how we treat our family at home.  Our sin nature lends itself to a preference of living according to our own desires in these areas and in shame and selfishness we often close the door on allowing God to impact how we live out the rest of our lives.

If you haven’t picked up on it yet, culture is learned mostly by what our young people observe and practice.  This is probably the scariest statement regarding our role in impacting our children as well as our culture. The hands off approach we sometimes take to parenting and a refusal to set boundaries with our children and enforce them teaches our children to feed their flesh and act selfishly and doesn’t teach them to think of others, have empathy, or endure inconveniences for the sake of all of us.

In closing this series, I hope you have gained a few nuggets of wisdom you can use in not only shaping your family but creating a culture that truly is based on godly principles. The overall effect creates . . .

people who feel safe but who are also courageous

people who are loving but not tolerant

people who are merciful but not silent

people who have hope but not in anything of this world

Until next time, “Be strong and of good courage, do not fear nor be afraid of them; for the Lord your God, he is the one who goes with you. He will not leave you or forsake you” (Deuteronomy 31:6).