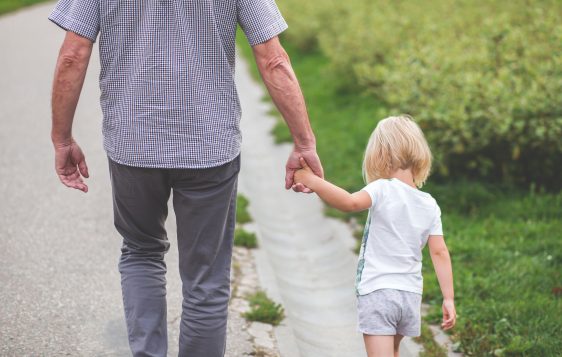 I didn’t know my grandparents well on my dad’s side. I can remember a little about them, but I was only four when they passed away.

I can remember Nanny Lorraine making fried potatoes in the kitchen and when she would wash my hair with Pert Plus in a blue bathtub.

I remember Pawpaw Pete feeling scruffy when I hugged him.

That’s all I can remember about them, but the stories my family has told throughout the years gives me a better picture of them.

One in particular was my grandfather owned an iron company and was the one responsible for making the gates of Graceland.

Is this true? I don’t really know, but my dad was proud to share that with us. It was something he was excited to pass down to the next generations of the Young family.

In Genesis chapter four we see Cain’s descendants and what’s being passed down through his generations.

“Cain made love to his wife, and she became pregnant and gave birth to Enoch. Cain was then building a city, and he named it after his son Enoch. To Enoch was born Irad, and Irad was the father of Mehujael, and Mehujael was the father of Methushael, and Methushael was the father of Lamech. Lamech married two women, one named Adah and the other Zillah. Adah gave birth to Jabal; he was the father of those who live in tents and raise livestock. His brother’s name was Jubal; he was the father of all who play stringed instruments and pipes. Zillah also had a son, Tubal-Cain, who forged all kinds of tools out of bronze and iron. Tubal-Cain’s sister was Naamah. Lamech said to his wives, ‘Adah and Zillah, listen to me; wives of Lamech, hear my words. I have killed a man for wounding me, a young man for injuring me. If Cain is avenged seven times, then Lamech seventy-seven times.” (Genesis 4:17-24)

What do we notice about Lamech? First, he took two wives.

Now you might say, “There were a lot of men in the Bible who had multiple wives, even men of God.” But this is the first-time polygamy happens, the first time this sin is described.

As my mom used to say, “Just because one person does it, it doesn’t make it right.”

God designed marriage to be between one man and one woman as we observed with Adam and Eve. If God intended it to be different, He would have made Adam more than one wife.

But Lamech chose his desire over the will of God.

Why? Because nowhere does the Bible say Cain ever repented of his sin.

Nowhere does it say he taught his children about the Lord.

And nowhere does it say his children served God.

In fact, it says in verses 25 and 26 that it wasn’t until Adam and Eve had another son, Seth, that men turned to God.

“Adam made love to his wife again, and she gave birth to a son and named him Seth, saying, ‘God has granted me another child in place of Abel, since Cain killed him.’ Seth also had a son, and he named him Enosh. At that time people began to call on the name of the Lord.”

So, what about Cain and his descendants?

They never turned to God, but it does not mean God doesn’t use them.

Look at the children of Lamech. One was a cattle farmer, one created music and one was a craftsman. Although Cain sinned greatly and did not teach his children about God, God still chose to use them for His perfect will.

Where would we be today without cattle farmers? I guess a world without hamburgers.

Where would we be today without the beautiful sounds of music to worship Christ with?

Where would we be today without the craftsmanship?

God continuously gives people chances to repent of their sin and turn to Him. Sadly for them, Cain and his descendants were proud of their sin and even boasted in their wrongs. Lamech may not have learned much about God from his ancestors, but he knew Cain was a murderer and God protected him.

He felt since his sin wasn’t “as bad” as Cain’s, perhaps his was in self-defense, he too should be protected. He knew nothing of what God had to offer him except entitlement.

God is more than protection. God has given us hope and eternal life through Jesus Christ.

When we dive into God’s Word, we learn about God’s character, His never-ending love, His power, authority and His grace.

What are we passing on to the next generation?