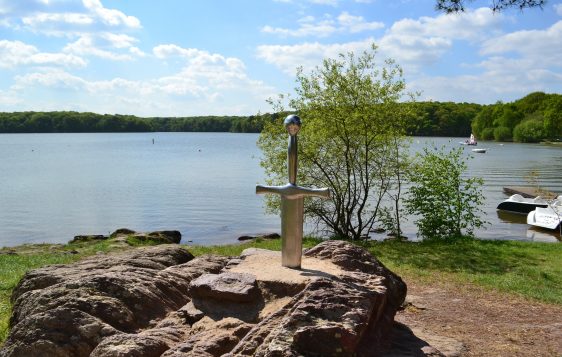 I remember the old Disney movie, The Sword and the Stone. It is a cute movie about a kid named Arthur who pulls a sword from the stone and becomes king.

But the movie is more about grabbing a piece of metal from a rock as Arthur develops as a person when he meets the wizard Merlin and goes on several adventures.

On one of these adventures, Merlin turns himself and Arthur into squirrels.

Lot has the same problem.

As we begin Genesis chapter 19, we will learn about the place Lot has chosen for his home and the people who occupied it.

“The two angels came to Sodom in the evening, and Lot was sitting in the gate of Sodom. When Lot saw them, he rose to meet them and bowed himself with his face to the earth and said, ‘my lords, please turn aside to your servant’s house and spend the night and wash your feet. Then you may rise up early and go on your way.’ They said, ‘No; we will spend the night in the town square.’ But he pressed them strongly; so they turned aside to him and entered his house. And he made them a feast and baked unleavened bread, and they ate.”

Let’s start by looking at where Lot is – at the gate. This is a prominent place to be involved with the town proceedings and also to be seen.

This is a place of status and a place where business is done. So, this shows us that Lot has high ranking status in Sodom.

Lot shows cultural hospitality and bows before them and urges them to his home.

First, it’s important to note God tells Abraham He would spare the city if He could find 10 people who are righteous.

Because the angels come to town to rescue Lot’s family from destruction, and because the city is destroyed at the end of this chapter (spoiler alert), we see there are not even 10 righteous people, or the cities would have been spared.

It is also important to understand how hospitality is an important role in their culture. Actually, it is considered disgraceful and even shameful to not be welcoming to strangers.

But we also can see Lot’s urgency. The angels in disguise tell Lot they would stay on the street that night, but Lot urges them to stay in his house because he knows what would happen if they slept on the streets… He knows his city and what the people who lived there are capable of.

“Before they went to bed, the men of the city of Sodom, both young and old, the whole population, surrounded the house. They called out to Lot and said, ‘Where are the men who came to you tonight? Send them out to us so we can have sex with them!’ (Genesis 19:4-5)

Why? Because the people in the town are wicked and this homosexual act and affront on basic hospitality reveals their hearts and why God is going to wipe these cities off the map in the first place.

As we continue reading, we see more of the context of the sin these men want to commit.

“Lot went out to them at the entrance and shut the door behind him. He said, ‘Don’t do this evil, my brothers. Look, I’ve got two daughters who haven’t been intimate with a man. I’ll bring them out to you, and you can do whatever you want to them. However, don’t do anything to these men, because they have come under the protection of my roof.’ ‘Get out of the way!’ they said, adding, ‘This one came here as an alien, but he’s acting like a judge! Now we’ll do more harm to you than to them.’ They put pressure on Lot and came up to break down the door.” (Genesis 19:6-9)

They are wicked and Lot calls it for what it is but that doesn’t deter their desires. He even offers them his two virgin daughters.

Why would he offer them to the men?

First, it’s the cultural hospitality, the angels were under the protection of his roof as this is not the last time in the Bible with a story similar to this (Judges 19). But again, Lot knows they want sex.

But why aren’t these men interested in his offer? Because they do not want women, they want the men.

“But the angels reached out, brought Lot into the house with them, and shut the door. They struck the men who were at the entrance of the house, both young and old, with blindness so that they were unable to find the entrance. Even after being blinded, did the men try to go home? No! They continued to try to find the door, so much that it says they ‘wearied themselves.’ Then the angels said to Lot, ‘Do you have anyone else here: a son-in-law, your sons and daughters, or anyone else in the city who belongs to you? Get them out of this place, for we are about to destroy this place because the outcry against its people is so great before the Lord, that the Lord has sent us to destroy it.’ So Lot went out and spoke to his sons-in-law, who were going to marry his daughters. ‘Get up,’ he said. ‘Get out of this place, for the Lord is about to destroy the city!’ But his sons-in-law thought he was joking.” (Genesis 19:10-14)

Lot’s family thinks he is joking when he tells them to leave the city because the Lord is about to destroy it.

To them, they had never seen a godly man.

They had only seen a man who was OK with what is happening in the city as Lot has never spoken against their behavior before… He was even willing to marry his daughters off to two men who were right outside trying to find the door to have sex with the strangers (the angels)!

The people of Sodom looked at Lot like that little female squirrel who looked at Arthur. He is telling them he is a man believing in God which makes him not a man of the godless city. But his actions, words, life… all of it reflected the morality of the city, or lack thereof, instead of God’s characteristics.

He isn’t able to convince anyone.

We say we are Christians, but do we really follow Christ?

When people look at you, do they see Jesus?

Do they know you are a believer?

I think it’s safe to say most people would be shocked if they knew what God intends His people to look like. Because based on the lives of most “Christians,” you wouldn’t be able to tell them apart from the rest of the world.

And I used to be one of them.

Our lives should be evidence of the power of God.

Jesus redeemed us, transformed us, and has called us to live a holy life.

If we want to have a real impact for the Lord on this world, we need to start looking more like Him than them.