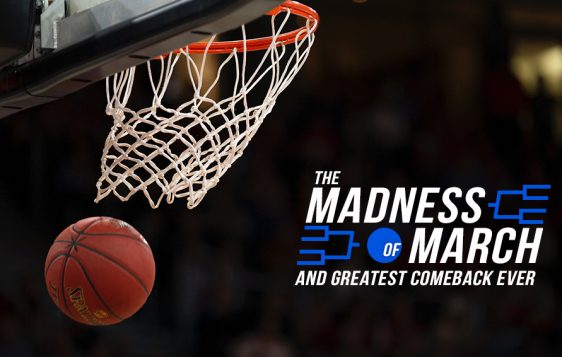 I will never forget the NCAA basketball tournament of 1985. It was at the height of my own personal selfishness: about to graduate from high school, trying to figure out the start of my adult life, totally absorbed in my new boyfriend I just knew I would marry some day . . . typical seventeen-year-old stuff.

But I remember that tournament and the greatest Cinderella, comeback story of all time, or at least in basketball. The Villanova Wildcats were a number eight seed team, way down in the new 64-team bracket. But they just started winning, and winning, and went all the way to the championship game . . .  and won that one, too!

But there are always what are now known as “Cinderella” teams in sports, so why is the Wildcats’ win considered the best of all time? Because they started so low in the bracket. Most Cinderella teams continue winning way more games than anticipated, but eventually they run into a North Carolina, Michigan, or a Georgetown (the team Villanova beat in the final game) and lose before the final four teams play.

In fact, no eight-seed team has ever won the championship game since.

Even the most ardent Hoya fan could not have predicted it.. No one believed in them outside of the team.

But it’s actually not the greatest comeback of all time. You would have to go back 2,000 years to find that story. And it would be easy to find because that comeback is recorded by many first-century eyewitnesses in the best-selling book of all time: the Bible.

It wasn’t an athletically gifted Olympic hero. It wasn’t one of the great Caesars who were conquering the world at that time. It was just a man who had come to earth to spread a message that would radically change the world: Surrender your life to God, obey his Word, and be free from a life of sin and death.

Unlike the Hoyas of 1985, however, his appearance in the world and his comeback victory over death was foretold many, many centuries before. But when he came, almost no one recognized him as the hero of the world.

He only lived 33 years, but during that time he started a movement that even under the worst oppression and persecution spread quickly to all known parts of world . . . It was called “The Way” but is better known as Christianity, which means being “ like Christ.”

But just as quickly as he came on the scene and those who followed him were beginning to vaguely understand his earthly purpose . . . he died a horrible, gruesome death at the hands of those who hated his message of what victory really meant.

So how could that possibly be a Cinderella, come-from-behind, impossible win?

He didn’t stay dead. He was resurrected.

Not possible, you say? Just another myth from an allegorical book of fairy tails?  Just ask one of those Christians, and he’ll tell you about what the only man ever to rise from the grave did in his life. She will say that Jesus took a damaged and sinful woman and changed her forever with a hope and a future. Christians have life-changing testimonies that no one can take away from them.

All because of the greatest comeback of time. Forget a number eight seed in a bracket of 64 teams, Jesus was just a man sent by his Father to spread a message that people still hate to this day. Despite people’s hatred of that message, Jesus is at the top of every list of the most influential people of all time.

He went from dead to alive, the greatest comeback in history. And that can be your story as well. Not matter how low in the brackets you are, no matter what your level of sinfulness, no matter what you’ve done, Jesus knows all those things and he only cares about your willingness to accept the free gift of salvation, humble yourself, surrender your life to him, and obey his precepts.

Grab a red-letter Bible or google “everything Jesus said” and know more of the story of the greatest comeback of all time. You can go from having a life that leads to death to a life radically changed by Jesus. You can be that impossible comeback story that  no one could have predicted and your very own story of a an impossible victory.