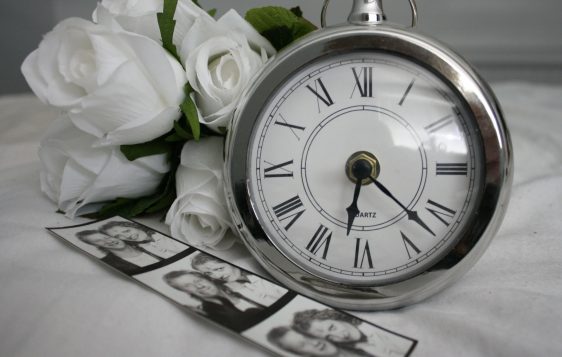 As people filed into the funeral home, I saw faces I hadn’t seen in years. They had all come to pay their respects to my dad, Johnny D.

They shook my hand, hugged me, offered condolences, and wanted to share stories of the good ole’ days. But many of their memories were quite different than mine.

Their recollection of “fun times” were of years spent partying with alcohol and drugs… the very things that tore apart our family, destroyed my father’s health and brought painful memories to my mind.

But they didn’t see it that way.

They fondly looked back on those days and, even now, they missed them.

With all of those old buddies in the room, I took the opportunity to share what my father was experiencing the day he died because he chose to look forward instead of longing for what he left behind.

I spoke of his faith in Jesus, His hope and promise of eternity, and the celebration that awaited my father in Heaven.

Several times in his life, my dad did look back.

And sometimes, He thought of the life he had before he sobered up. On those days he picked up the bottle again, and it always led to destruction.

This time, he never looked back.

I wanted them to know they too could have the same future if they would repent and trust in Christ.

In the book of Genesis, Lot and his family face a similar dilemma. The angels have come to deliver them from the sinful city they had made their home and you would think they would be joyful and thankful, but instead they were resistant to leaving.

“At daybreak the angels urged Lot on: ‘Get up! Take your wife and your two daughters who are here, or you will be swept away in the punishment of the city.’ But he hesitated. Because of the Lord’s compassion for him, the men grabbed his hand, his wife’s hand, and the hands of his two daughters. They brought him out and left him outside the city. As soon as the angels got them outside, one of them said, ‘Run for your lives! Don’t look back and don’t stop anywhere on the plain! Run to the mountains, or you will be swept away!’ But Lot said to them, ‘No, my lords—please. Your servant has indeed found favor with you, and you have shown me great kindness by saving my life. But I can’t run to the mountains; the disaster will overtake me, and I will die. Look, this town is close enough for me to flee to. It is a small place. Please let me run to it—it’s only a small place, isn’t it? – so that I can survive.’ And he said to him, ‘All right, I’ll grant your request about this matter too and will not demolish the town you mentioned. Hurry up! Run to it, for I cannot do anything until you get there.’ Therefore the name of the city is Zoar. The sun had risen over the land when Lot reached Zoar. Then out of the sky the Lord rained on Sodom and Gomorrah burning sulfur from the Lord. He demolished these cities, the entire plain, all the inhabitants of the cities, and whatever grew on the ground. But Lot’s wife looked back and became a pillar of salt.” (Genesis 19:15-26)

There are 4 major points we can take from this passage of scripture.

The Lord urged him, but Lot couldn’t imagine leaving their home.

Why? Because, he had lived in this sinful environment for so long he no longer recognized it for what it was. Sin has that effect on us too if we allow ourselves to be swallowed up in it.

2. The angels had to physically remove Lot and his family.

Not only was Lot concerned about leaving the comforts of his home, his family was too. Lot was the leader of the family and he had led them to follow the sins of Sodom instead of the things of God.

3. When the Lord told him to go to the mountains, Lot ridiculously made excuses about evil taking over him.

Hello? This was the Lord. He was pulling them from evil to safety!

But not in Lot’s mind.

He was thinking of all the things he was having to give up instead of what the Lord would provide for him.

4. The Lord told them to go forward and to not look back.

The angel gave a direct warning. And what did Lot’s wife do? She looked back.

She didn’t want to leave. While she looked like she was following God, her heart still longed for the sinful world she was leaving behind.

Do you long for the good ol’ days?

What about them was good?

For my dad, he recognized Jesus was greater than anything he was leaving behind.

Where are you today?

Are you in so deep you don’t even recognize that the very things you surround yourself with are sinful?

When you turn to Christ, His light reveals the sins that are hidden in the dark.

Run to God and never look back!