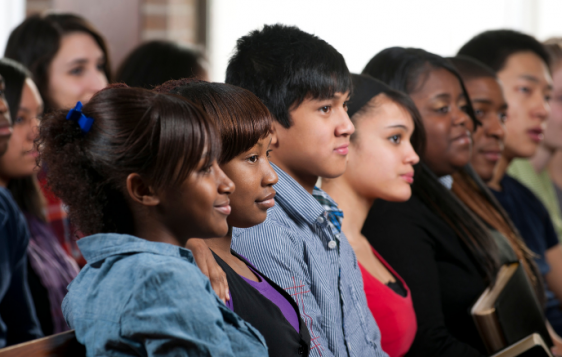 So let’s just state the obvious. We are all different, and unity is something that can be pretty elusive. In the first-century church there were vast cultural differences between Christian Jews and the Christian Gentiles. When the church first started, it was exclusively Jewish. All the apostles were Jewish. The epicenter of the movement was Jerusalem. And even the ethnically non-Jewish Christians had converted to Judaism before they first heard the Good News of Jesus so they still had that Jewish knowledge and background.

When Christian persecution began in Jerusalem with the martyrdom of Stephen, believers began taking the good news outward from the epicenter of Jerusalem. After Saul becomes a Jesus-follower and Peter visits  Cornelius, we see the Good News of Jesus being presented to Gentiles with no Jewish background. Between Acts 14 and Acts 15 the book of Galatians is written from Paul—the guy who planted churches in the region of Galatia—to these people to address very specific issues.

Before we get into the text of Galatians, let me make a point. The Bible is not a systematic theology textbook, meaning that all the information about God and our faith is not laid out in a neatly organized fashion. Does the Bible contain theology? Yes, it’s our only source of theology. Everything we believe is based on this and this alone. The Bible is a collection of documents written to specific people for specific purposes that God preserved for us so we can know and trust Him. The book of Galatians is a letter to these churches discussing how Gentiles are saved and how Jews and Gentiles should get along.

In this letter, Paul discusses the relationship between the Law of Moses and salvation in Christ. He tells the Galatians (and us) we can’t be good enough to be saved through the Law and shows us how much we need Jesus. Then Paul tells Jewish Christians and Gentile Christians sharing a church together, “For you are all children of God through faith in Christ Jesus. And all who have been united with Christ in baptism have put on Christ, like putting on new clothes. There is no longer Jew or Gentile, slave or free, male and female. For you are all one in Christ Jesus.”

These words were radical teachings. We can’t fully appreciate just how radical they were because we live in a Christianized world. So let’s start with the most radical Jesus brought to the world: “male and female.” One ancient Roman scholar wrote: “The birth of Jesus was the turning point in the history of woman.” I know that seems worlds apart from what you hear today, right? Let’s look at the facts.

Greek women couldn’t leave home without a male escort and couldn’t be present in the room of her own house if her husband had friends over.

They couldn’t speak in public.

They could be divorced and cast out of their home for almost any reason.

They could receive no inheritance.

Caesar Augustus even passed a law allowing husbands to determine whether a woman should live or die. What about Jewish women? Rabbinic law—the law put into place after the Old Testament —forbade women to speak publicly.

But Jesus and the Christians that followed Him were different. Jesus talked to the Samaritan woman and gave her dignity, two shocking things in their context: not just openly speaking to a woman but also one of ill repute. Both were were practically heretical, but he didn’t stop there:

Jesus taught women. Jesus even chose women to be the first people to whom he appeared after His resurrection. The mission of Jesus is much higher than social recalibration or political revolution—those things are brief moments of history. Jesus’ focus was eternal, the kingdom of heaven. Jesus set a powerful example that His followers followed so well they changed the world’s view of women.

In addition to what Jesus taught about women, the same can be said for slaves, who were not citizens and had no rights in Greek and Roman culture. The Old Testament listed many protections for slaves who sold themselves into slavery to pay back debts and slaves were all freed at prescribed times so no one was indebted forever. But in the New Testament, Jesus said the rich, the poor, the slave, and the free all are on a level playing field to God and in the church and should be treated with respect and dignity.

Such a radical concept.

That’s why Paul reminds them of this unifying truth: “you are all one in Christ Jesus.” No us and them. No first class and second class. No your church and our church. They “are all one in Christ Jesus.” This would be a theme in many of Paul’s letters, but here’s just one example. In his letter to the believers in Ephesus, Paul wrote: “Christ himself has brought peace to us. He united Jews and Gentiles into one people when, in his own body on the cross, he broke down the wall of hostility that separated us” (2:14). Bottom line: we are one in Christ.

So what does this mean for us?

We live in a very divided time, and many highly-paid, powerful people are telling us what we should be doing, but as Christians we only need to do three simple things:

One. Remember we are all created equally in the image of God and—if we are believers—we are one in Christ.

Two. “Be patient with each other, making allowance for each other’s faults because of [our] love.” No individual person is perfect, no group of people is perfect. Choose to be patient, make allowances for each other, and don’t expect other people to be perfect. Everyone will mess up and disappoint you from time to time. Make amends and move on.

Three. “Make every effort to keep [ourselves] united in the Spirit, binding [us all] together with peace.” People will try to divide us. Don’t let them. What unites us—the Holy Spirit—is much more powerful than what divides us. Work hard to protect the unity we have as believers and don’t give people who cause needless division room to speak. Jesus said it best: “a family splintered by feuding will fall apart” (Mark 3:25). Believers, let’s be united in Spirit, make allowance for each others fault, and celebrate that we are all one in Christ.

I hope you learned something in this video. If you did, please share it, and subscribe so you can catch the next Bible Tidbits video when it drops on Thursdays.

Before we go, I want to tell you about Lifeword, a fantastic organization that uses media to reach the entire world with the Good News of Christ. If that’s the kind of thing you are into—and I hope you are—make sure you are following them on all your social accounts like Facebook, Twitter, and Instagram so you can stay encouraged and up-to-date on work they are doing around the world. You can even follow them on YouTube.