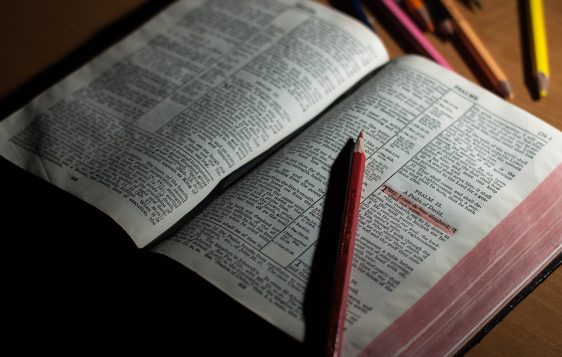 “Heaven and earth will pass away, but my words will never pass away.” (Jesus in Matthew 24:35 NLT)

The Christian Bible is packaged ever so nicely into one (thick) book – well, into what looks like a book.

But the Bible isn’t actually a book.

It’s sixty-six books that are put together to look like one large book.

Books within a book, so to speak.

For centuries, books didn’t exist like we know them today.

Before the advent of modern bookbinding, works of writing were carried as scrolls or parchments. This made having all the books of the Christian Scriptures impossible to carry in one piece. Think of it another way, if you think your Bible is big now, imagine it as one large, rolled up scroll. Or as a huge stack of thin animal skins. Not very practical.

So, until the technology arrived for making the modern book, most of the individual books of the Bible were actually separate works (scrolls or parchments) – so, you’d have a scroll that was just Proverbs, Luke, or Ephesians.

Ah, but now we have the technology to make books – thick books.

This innovation make it possible for God’s people to have all of the Scriptures in one place in a convenient package.

Remember though, the Bible is not a book – it’s a collection of sixty-six books.

Let’s not stop there – the Bible transcends binding.

For a few years now, the Bible is also an app.

God’s Word can’t be contained in print. It has always morphed into the most cutting edge platform of its day.

First, scrolls.
Then, codices.
After that, a book.
And now, code.

The most notable Bible app is LifeChuch.tv’s Bible app. This app has been downloaded over 167 million times, contains over 1000 different translations, and can be read in over 750 world languages.

And even with all that, it can still fit inside a pair of skinny jeans.

We must be careful to never limit the Bible to print. God’s Word isn’t only God’s Word when it has been printed on a page. God’s Word is God’s Word wherever and however it is presented. That’s why I, when speaking to a group, always say something to this effect: “If you’re joining me today in God’s Word, whether in a physical printed form or in a digital app form, head over to…”

We need to continue to welcome this innovation that’s making the Bible more accessible to people all around the world. Don’t browbeat the digital pioneers in your church that pull out their smartphone when the pastor is teaching – applaud them.

If you’re still not convinced that God is working through Bible apps, consider that since the Bible app launched in 2008 it has been used to read the Bible for a total of 125 billion minutes.

That’s a lot of people getting into God’s Word.

I’m excited about those numbers – and I bet God is, too.