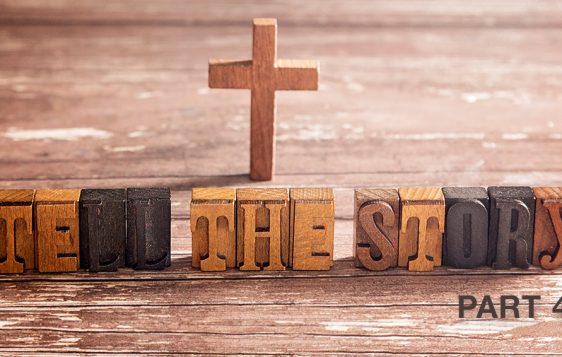 God desires his children to be sanctified and surrendered.  Sanctified means being set apart for God and His glory and surrender means to give our all to Jesus. It’s all in his hands; we lay everything at his feet in complete surrender as our lives should reflect the light and life of Jesus.

But do our actions tell the story of Jesus? In the old hymn “I Love to Tell the Story” the writer says that story is about Jesus, his love, and his sacrifice. Telling our personal stories can happen without saying a word. People can know we’re Christians because of how we live our lives.

Luke 7:36-50 says, “One of the Pharisees desired that he would eat with him and he (Jesus) went into the Pharisee’s house and sat down, and behold a woman in the city, which was a sinner . . . brought an alabaster box of ointment and stood at his feet behind him, weeping and began to wash his feet with tears and did wipe them with the hairs of her head and kiss his feet and anointed them with the ointment.Now when the Pharisee . . .  saw it he (thought), ‘This man if he were a prophet would have known who and what manner of woman this is that touch with him, for she is a sinner.”And Jesus (said), ‘Simon. I have somewhat to say . . . There was a certain creditor, which had two debtors. The one out 500 pence and the other 50. And when they had nothing to pay, he forgave them both. Tell me, therefore, which of them will love him most?’ Simon answered and said, ‘I suppose that he to whom he forgave most. and ne And he said unto him, Thou has rightly judged.And he turned to the woman, and said unto ‘Simon, (did you see) this woman when I entered into the house that gave me no water for my feet.? But she has washed my feet with tears and wiped them with her hair . . . But this woman since the time I came in has not ceased to kiss my feet. My head with oil thou did not anoint but this woman has anointed my feet with ointment. Wherefore I say unto thee, her sins, which are many, are forgiven.

“For her, she loved much, but to whom little is forgiven, the same loved with little.’ And (Jesus) said unto her, ‘Thy sins are forgiven.’

“And they sat at meet with him and began to say within themselves, ‘Who is this that forgiveth sins also?’ And he said to the woman,  ‘Thy faith has saved thee. Go in peace.’”

These verses need a little cultural and historical background. During the time period that Jesus was on earth, two things in the Jewish culture were highly regarded: cleanliness and hospitality. A host would be shamed if these two items were not given the utmost importance. This was especially true for Pharisees, who were the religious authorities and followed the law to a “T”. They were legalistic, and not only did they follow the laws given to Abraham, but they added some of their own.

This reminds me of playing games with my nephew. We lay out the rules before we start then he begins adding more rules: he says, “Oh, and we have to add this.” We’ve made up so many rules. I can’t even remember all of them. That’s exactly how these men were. They were adamant about their traditions. Mark 7:3 says the Pharisees did not eat unless they give their hands a ceremonial washing, which isn’t just going to the sink and washing our hands. This is an in-depth ceremonial washing of not only their hands but their feet as well.

Can you imagine how nasty their feet would have been without paved roads? Transportation was by donkey or on foot so their roads were made of dirt, sand, and rock. Can you imagine stepping in the same place as your donkey that just relieved himself on that road? Plus, they weren’t wearing boots; they were wearing sandals, so it was important to wash their feet when they entered someone’s home. And that was the job of the host, to supply that washing.

Typically, if they were wealthy enough, people had servants who washed the feet of their visitors. If there were no servants, there was a time set aside before the meal to prepare and clean up. Verse 36 says that one of the Pharisees invited Jesus to dinner. Pharisees were often wealthy people, so when Jesus entered the house and sat down there was no foot washing. There was no preparation. There was no ceremonial cleansing. There was none of that. The very men who were supposed to be the religious authorities didn’t even offer him that courtesy.

It’s hard to read the story without being emotional. What an amazing opportunity to bow before the king of kings. She didn’t ask for a crown on her head. She didn’t ask for a place in heaven. She just humbly bowed, recognizing that she was a sinner and recognizing him as Savior. She used an expensive perfume on his feet to clean them, probably more than a year’s worth of salary for her, and yet she poured out her best for the Lord as the Pharisees pointed out her sin and transgression.

Jesus pointed out their lack of hospitality and understanding. They claimed to know God, but they were farther from him than they even realized. With her act of service not only did she fulfill the Jewish custom of cleanliness and hospitality, but she bowed herself in service to the Lord and her sins were forgiven.

In John 13:4-5 Jesus himself took on this role of service with his disciples around the time of the Last Supper as he’s giving them their last commandments. It’s the last time he will speak with them just before Judas betrays him. John says Jesus rose from supper “and laid aside his garments, and he took a towel and he guarded himself. And after that, he poured water into a basin and began to wash the disciples’ feet and to wipe them with the towel were with which he was girded.”

The disciples couldn’t understand what Jesus was doing. This was the job of a servant. It wasn’t supposed to be the job of their master, their lord, but the job of a servant, and yet Jesus was taking on that role. “Peter said unto him, thou shalt never wash my feet. Jesus answered him, ‘If I wash thee not thou hast no part with me.’ Simon Peter said unto him, ‘Lord, not my feet only but also my hands and my head.” Peter didn’t just want part of him to be with the Lord. He wanted all of himself to be with the Lord.

Do our actions demonstrate that same feeling? Does our service to the Lord tell of his mercy and his love when we’ve received salvation? Salvation causes a desire down deep in our souls to serve the Lord with gladness. Our God came to this earth as a man to demonstrate his love for us. If the Lord God could humble himself to the lowliest of jobs, which was only for a servant, how much more should we serve him?

Not only should we sanctified and surrendered, but we should also be in his service. Do our actions tell the story of Jesus and his love as we serve others? What can we do to submit ourselves to the will of God and our service to him? Maybe you’re an encourager and you need to encourage somebody. Maybe you have a special gift and the Lord wants you to use it and he’s urging you to use it and you just haven’t yet. Pray about that and see how the Lord might be using you to serve Him, not begrudgingly but with gladness.

Jesus made it clear that when we serve, when we do things for others, we are honoring him as well. He is our example of true, selfless humility, and when the sinful woman used the expensive perfume to wipe Jesus’ feet, she was an example of that selflessness. Let’s honor Jesus every day by loving the least of these.